By Ruth Ann Strickland
Other articles in Issues Related to Speech, Press, Assembly, or Petition, Freedom of the Press issues and topics 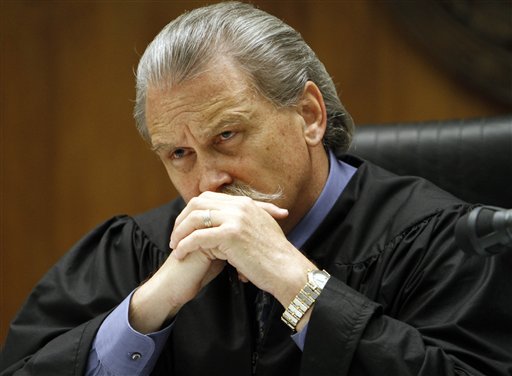 Judge David J. Danielsen listens to arguments at a hearing where he lifted a gag order in the cases of murdered teenagers Chelsea King and Amber DuBois in Superior Court Thursday April 22, 2010 in San Diego. Gag orders on trial participants are often used to ensure fair trials. However, gag orders on the press must meet high standards set by the courts to avoid prior restraint. (AP Photo/Lenny Ignelzi, with permission from the Associated Press.)

Gag orders — issued by a court, government, or private entity — require an individual to refrain from making public comments. Typically, judges issue injunctions barring trial participants — including attorneys, litigants, and witnesses — from discussing trial-related material outside the courtroom. In general, courts have held that gagging people involved in trials is more acceptable than similar orders issued against the press.

In Gentile v. State Bar of Nevada (1991), the Supreme Court held that attorneys who make out-of-court statements are not entitled to the same level of protection as the media. Gag orders on the press represent a form of prior restraint and are seldom upheld.

The Supreme Court in Sheppard v. Maxwell (1966) ruled that defendants are entitled to impartial juries and that trial court judges should take strong measures to uphold the right to a fair trial. Judges interpreted Sheppard as an authorization to impose gag orders on trial participants, but some even began to place them on the media. The Court dispelled this latter notion, setting a high bar for such orders in Nebraska Press Association v. Stuart (1976). This case arose from the 1975 trial of Erwin Simants, who was charged with murdering six people. The county judge issued a gag order barring the media from reporting on Simants’s confession, statements he made to others, contents of notes he had written on the evening of the murders, as well as other potentially damaging information. The Supreme Court invalidated the judge’s order, ruling that media gag orders must meet a heavy burden and that courts must stringently demonstrate the need for them. Rather than issuing gag orders, courts should consider alternatives, such as change of venue, trial postponement until public attention fades, rigorous voir dire (or jury selection procedures), and jury sequestration.

Judges issue gag orders to ensure a fair trial, to facilitate efficient administration of justice, and to prevent prejudicial information from reaching the jury pool. If prosecutors use the press to broadcast inadmissible material in court to jurors, such as the administration of polygraph tests or results, then defendants may be denied their right to an impartial jury.

Furthermore, proponents claim that the harm caused by such disclosures may hinder the fair administration of justice. Prejudicial press coverage of trials may even undermine public confidence in the judiciary and in jury verdicts. In the Oklahoma City bombing trial of Timothy McVeigh, Chief Judge Richard Matsch ordered all lawyers, law enforcement officials, and court personnel involved in the case to avoid making statements outside of the courtroom about the jury and the trial proceedings.

Across appellate court jurisdictions, judges strike down as well as uphold gag orders, but most gag orders go unchallenged. Opponents of gag orders argue that judges should be subjected to strict standards before gagging trial participants. They also contend that judges frequently use gag orders without looking at viable alternatives and charge that many orders are too broad and should be limited to specific information; in addition, they hinder the newsgathering abilities of the press and restrict the flow of information to the public. In short, many civil libertarians and journalists see gag orders as a threat to the First Amendment guarantee of a free press, while judges see them as inherently necessary to maintain the integrity of the judicial process.