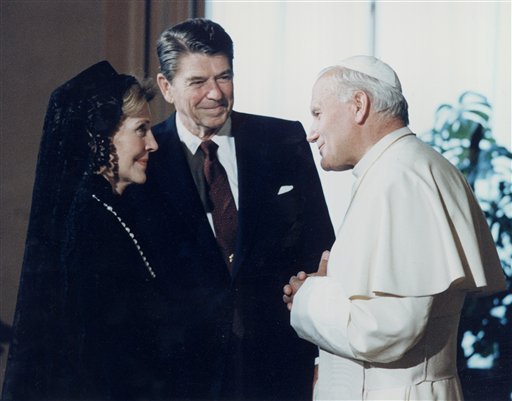 President Ronald Reagan who began formal diplomatic relations with the Vatican City in 1983, but U.S. relations with the city-state have stirred concerns among the Protestant majority in the United States and more generally among individuals who fear that recognition of the city-state could violate the doctrine of separation of church and state. In this June 7, 1982 file photo, U.S. President Ronald Reagan and his wife, First Lady, Nancy Reagan, meet Pope John Paul II at the Vatican. (AP Photo, used with permission from the Associated Press)

Vatican City, a sovereign city-state located within Rome, Italy, is the world’s smallest independent state in both population and area. Established in 1929, it is ruled by the Bishop of Rome, or the pope, although it is distinct from the centuries’ older Holy See, which is the seat of the governing body of the Roman Catholic Church and also led by the pope. For example, Vatican City issues its own passports distinct from those of the Holy See, which is not an independent country and therefore can only issue diplomatic or service passports. Most Americans, however, do not make a distinction between these two unique entities, and as a result, U.S. relations with Vatican City have stirred concerns among the Protestant majority in the United States and more generally among individuals who fear that recognition of the city-state could violate the doctrine of separation of church and state.

From 1797 to 1867, the United States had a representative to the papal states, which at the time exercised sovereignty over much of central Italy. The papal states, in turn, had a consulate in New York City, and President James K. Polk appointed Jacob I. Martin as an official chargé d’affaires to this consulate in 1848. Other presidents continued this practice. At a time of rising concern over the immigration of Catholics from Europe (later reflected in the activities of the Ku Klux Klan) and just before the incorporation of the papal states into Italy, the U.S. Congress adopted a law in 1867 prohibiting funding for such diplomats. This law remained in force even after Italy recognized Vatican City in the Lateran Treaty of 1929.

It was not until a decade later, in 1939, that President Franklin D. Roosevelt appointed a personal representative, Myron Taylor, to Vatican City. President Harry S. Truman subsequently discontinued this contact and withdrew the nomination of Gen. Mark Clark as an ambassador to Vatican City when both the public and Congress raised objections after he proposed extending formal diplomatic recognition to the city-state in 1951.

Regan began formal diplomatic relations with the Vatican in 1983

President Richard Nixon resumed the practice of sending a personal representative (Henry Cabot Lodge) without official status to Vatican City in 1970, and other presidents continued this, but it was President Ronald Reagan who began formal diplomatic relations with the city-state in 1983, the same year that Indiana senator Richard Lugar and Wisconsin representative Clement Zablocki successfully initiated legislation to repeal the 1867 ban on funding such a representative. Perhaps hoping that this appointment might increase support among American Catholics, Reagan might also have observed that the United States was among such powers as the Soviet Union and China not represented in Rome.