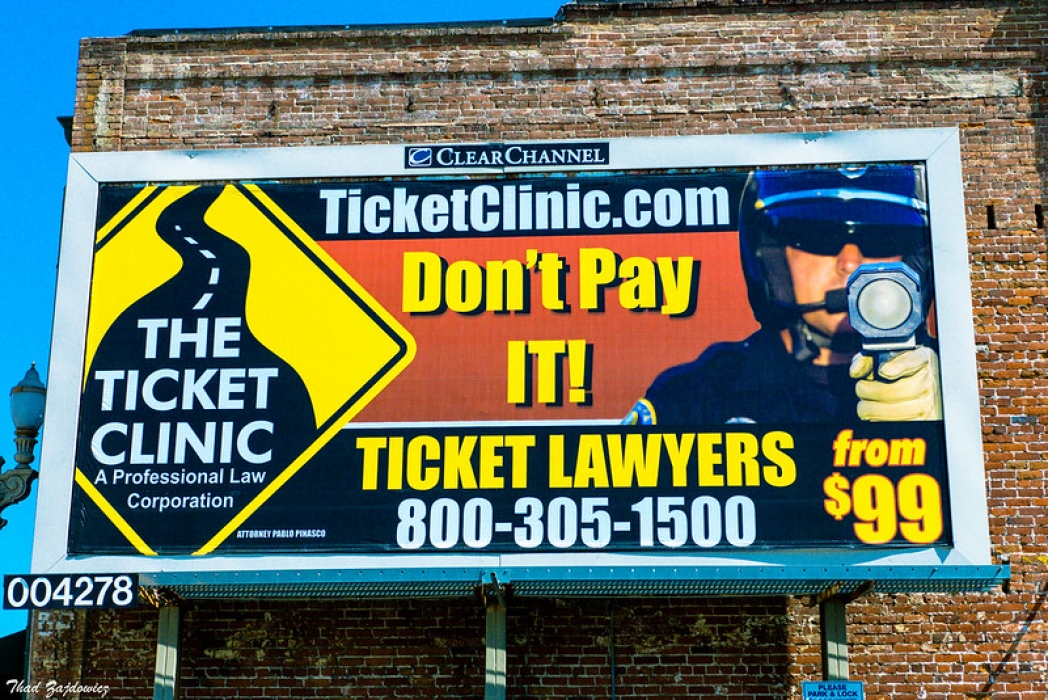 The regulation of attorney advertising continues to present challenging First Amendment issues for courts. Bar regulators attempt to protect the public from misleading, deceptive, or coercive ads while ensuring that attorneys retain a measure of free-expression protection. (Photo by Thad Zajdowicz, CC BY 2.0)

The regulation of attorney advertising continues to present challenging First Amendment issues for courts, as bar regulators attempt to protect the public from misleading, deceptive, or coercive ads while ensuring that attorneys retain a measure of free expression protection.

Attorney advertising flourished in the 19th century, with ads appearing regularly in the classified sections of newspapers.

The American Bar Association’s (ABA) Commission on Advertising (1995) wrote, “Advertising was viewed as a function of commerce in an era of growth both in the business community and the legal community” (p. 30). Even Abraham Lincoln and his law firm advertised in the 1850s.

The climate changed, however, when the ABA condemned lawyer advertising in its 1908 Canons of Professional Ethics.

Canon 27 provided in part, “The most worthy and effective advertisement possible, even for a young lawyer, and especially for his brother lawyers, is the establishment of a well-merited reputation for professional capacity and fidelity to trust” (Ibid.:33).

The canons permitted business cards but prohibited other forms of advertising. This led many states to pass regulations banning or severely limiting attorney advertising.

Attorneys possessed few, if any, free expression rights as a result of the Supreme Court’s decision in Valentine v. Chrestenson (1942). Although the ruling involved a non-attorney distributing handbills, the Court wrote, “We are equally clear the Constitution imposes no such restraint on government as it respects purely commercial advertising.”

This holding controlled for more than 30 years, until the Court’s landmark decision on pharmacy ads in Virginia State Board of Pharmacy v. Virginia Citizens Consumer Council, Inc. (1976).

In this case, the Court ruled that commercial speech — that is, speech that does no more than propose a commercial transaction — is entitled to some degree of First Amendment protection.

A year later, in Bates v. State Bar of Arizona (1977), the Court found attorney advertising specifically to be a form of commercial speech entitled to some degree of First Amendment protection.

The case involved two young Arizona attorneys who had placed an ad in a Phoenix newspaper quoting prices for certain routine legal services. This action violated a state rule flatly prohibiting such advertising. Faced with a suspension, the attorneys challenged the rule unsuccessfully in state court.

They appealed to the Supreme Court, which ruled in their favor by a 5-4 vote. Justice Harry A. Blackmun, who had authored the majority opinion in Virginia Pharmacy, also wrote for the majority in Bates.

He reasoned that “the disciplinary rule serves to inhibit the free flow of commercial information and to keep the public in ignorance.”

Though he ruled in favor of the attorneys, Blackmun cautioned that false, deceptive, or misleading attorney advertising would not be protected.

The next year, the Court upheld a restriction on in-person solicitation by an attorney in Ohralik v. Ohio State Bar Association (1978).

“Unlike a public advertisement, which simply provides information and leaves the recipient free to act upon it or not, in-person solicitation may exert pressure and often demands an immediate response, without providing an opportunity for comparison or reflection,” the Court wrote.

Court has tended to favor First Amendment rights of lawyers

From 1977 until 1995, the only time the Court upheld a restriction on attorney speech involved the ban in Ohralik. Notes First Amendment scholar Rodney Smolla (2002), the Court has tended to favor freeing the speech of lawyers despite Ohralik.

The Court distinguished the thirty-day ban from the total ban in Shapero.

Applying the four-part Central Hudson test for determining whether commercial speech can be regulated, the majority reasoned that the 30 day ban furthered the state’s substantial interests in protecting the privacy rights of victims and the reputational interests of the bar.

Florida Bar occurred ironically at a time when the Court had begun to accord commercial speech more protection.

It struck down various restrictions on commercial speech in:

Attorney advertising continues to face increased scrutiny. Bar regulators grapple with whether to allow client testimonials, publication in Super Lawyer magazines, and how to regulate attorney speech on the Internet.