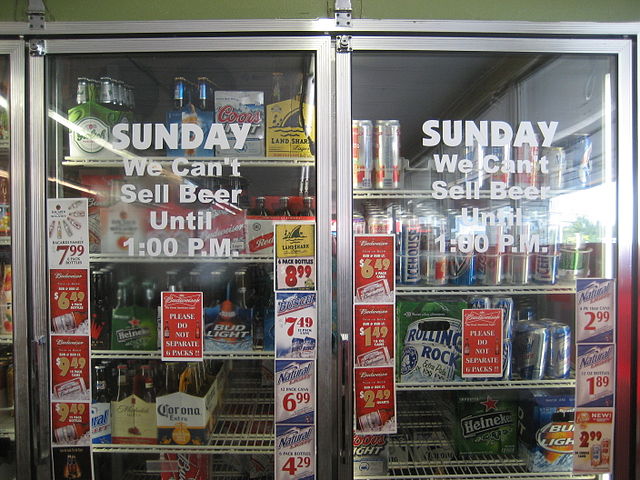 Signs in Yeehaw Junction, Florida, show when beer may be sold on Sunday. This sign is an example of a Sunday blue law. Blue laws stem from historical regulations prohibiting certain activities on the Sabbath. In Gallagher v. Crown Kosher Super Market of Massachusetts, the Supreme Court ruled blue laws constitutional. (Photo by Infrogmation, CC BY-SA 3.0.)

The Supreme Court in Gallagher v. Crown Kosher Super Market of Massachusetts, 366 U.S. 617 (1961), found that a Sunday blue law did not violate the First Amendment free exercise clause or the due process or equal protection clauses of the Fourteenth Amendment.

Originally enacted in 1653, the law at issue provided that “whoever, on the Lord’s day, keeps open his shop, warehouse or workhouse, or does any manner of labor, business or work, except those of necessity or charity, shall be punished by a fine of fifty dollars.” Although the law was amended several times, with exceptions made to affected businesses over the years, supermarkets were to remain closed on Sundays.

One of the exceptions allowed kosher markets to open on Sunday mornings until 10:00. The Crown Kosher Super Market, which had opened in 1953, was the only kosher grocery in the area, catering to Jewish customers from Vermont and Connecticut. It closed at sundown on Fridays to observe the Jewish Sabbath and reopened on Sunday mornings, when it did one-third of its business.

On May 2, May 30, and June 6, 1954, all Sundays, officers of the Springfield Police Department purchased items at the store and subsequently arrested owner Howard Chernock, who was convicted of violating the Sunday closing law. He was fined $15.

In response, Chernock and other owners, plus three customers, filed suit against Raymond P. Gallagher, the Springfield police chief, in federal district court in Boston, arguing that the so-called Lord’s Day Statute violated the establishment clause of the First Amendment. They further alleged that the statute violated the equal protection clause of the Fourteenth Amendment because it harshly affected the proprietors and customers of a kosher establishment, thus singling out Orthodox Jews. Because Orthodox Jews are forbidden to labor between sundown Friday and sundown Saturday, the only time for the supermarket to operate would be Saturday after sundown until 10:00 a.m. on Sunday, which would be impractical.

A three-judge panel of the district court voted 2-1 for Chernock and the other appellants, finding the state’s blue laws an “unbelievable hodgepodge” of restrictions and exceptions. Gallagher appealed to the Supreme Court, which reversed in a 7-2 decision.

Chief Justice Earl Warren found that the Sunday closing law had, over the years, lost its original religious intent and that the state was within its police powers to declare a day of rest and tranquility from most commercial ventures. Warren further stated that a day of rest does not prevent any person freely to exercise religious beliefs even though the law made no exception for those who worshiped on a different sabbath. Justices William J. Brennan Jr. and Potter Stewart dissented, arguing that the law limited the free exercise of religion. Stewart wrote, “Massachusetts has passed a law which compels an Orthodox Jew to choose between his religious faith and his economic survival. This is a cruel choice ... which no state may constitutionally demand.”