By Daniel Baracskay
Other articles in Issues Related to Speech, Press, Assembly, or Petition 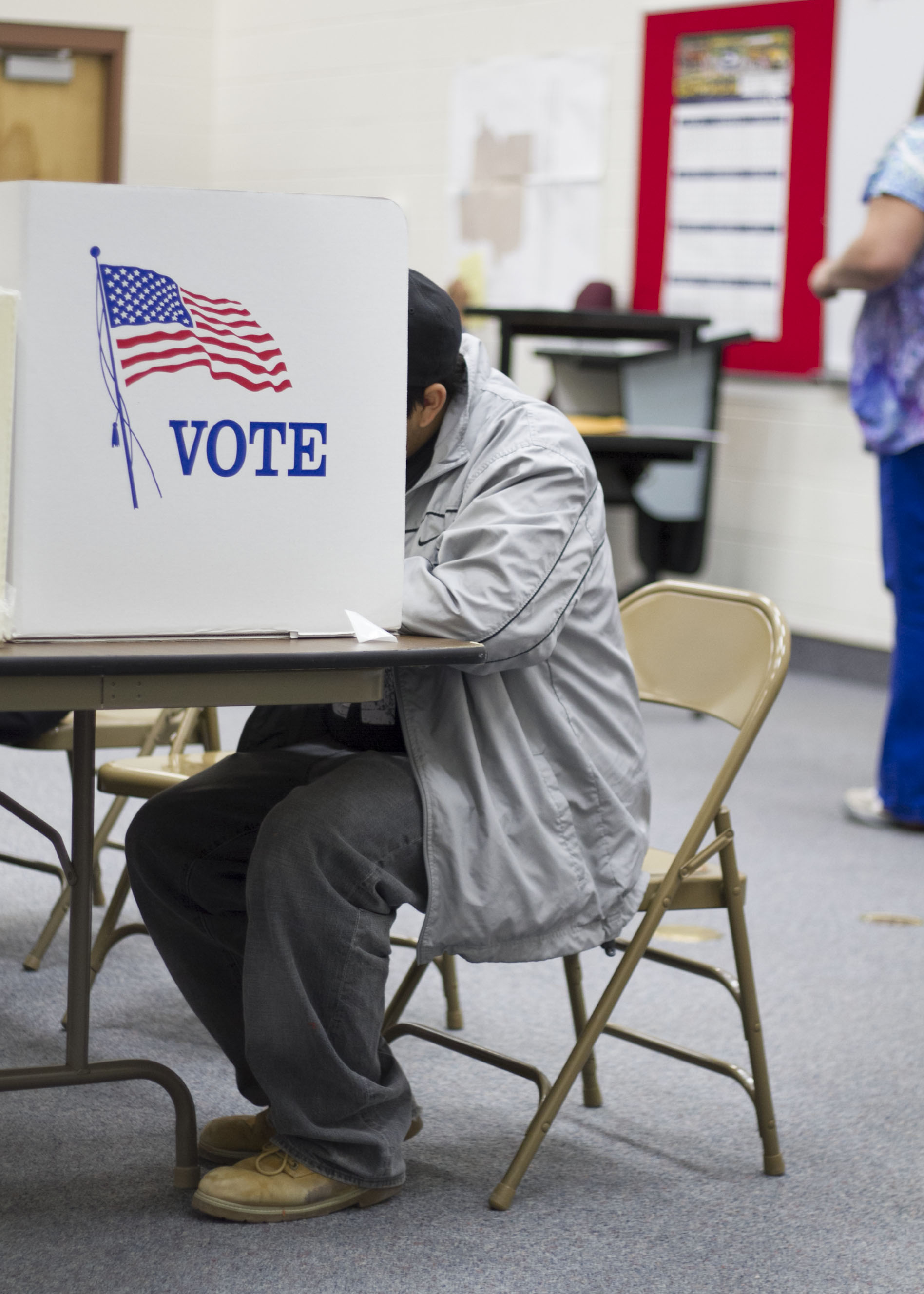 The right of candidates and political parties to be on the ballot is not unlimited. Yet this right implicates the freedom of association, and the courts have ruled that the government’s authority to regulate elections cannot make ballot access unduly burdensome. (Photo: A ballot booth at the polling station in Wyoming Indian High School’s Tech Center in Ethete, Wyoming. Credit: Lindsay D’Addato, licensed under CC BY 2.0)

Ballot access refers to the basic rules and procedures that regulate whether and how candidates or political parties will be presented to voters for electoral consideration. Fundamental to promoting democracy, ballot access continues to be the subject of considerable debate in the United States.

The U.S. Constitution decentralizes the election process to the states. Article 1, Section 4, of the Constitution states that “the Times, Places and Manner of holding Elections for Senators and Representatives, shall be prescribed in each state by the Legislature thereof.”

This deferral of election procedures to state governments, which has remained in place over time, has allowed each state to consider its own unique circumstances and conditions when designing the criteria for access. Amendments to the Constitution have, however, limited discrimination in voting based on race (15th Amendment, 1870); sex (19th Amendment, 1920); payment of a poll tax (24th Amendment, 1964); and age (26th Amendment, 1971).

The original constitutional design of ballot access did not lend itself to secrecy. Before the latter half of the 19th century, voters would either verbally inform election officials for whom they were voting or would place a ballot printed by their own political party in the ballot box. These practices tended to make the process prone to corruption, misinterpretation, and inefficiency.

The Australian ballot, created in that country in 1858 and adopted by the United States in the 1880s, changed this design and allowed voters to cast their votes in secret for candidates on an office-by-office basis using an official ballot. The new process not only ensured confidentiality but also made the election process more formal and credible. The Australian ballot model was thereafter used successfully in presidential elections, but voter turnout declined noticeably, because voters had to be able to read the ballot and literacy rates then were much lower than today. The Australian ballot also had an effect on ballot access, which until then had been relatively uninhibited.

Variety of ways to gain ballot access across nation

The states are the primary vanguard of ballot access. Many state governments delegate this responsibility to their county governments, which have elected or appointed “supervisors of elections.” The result has been extensive electoral variability throughout the nation, not only in the criteria for gaining access to the ballot, but also in the ways in which elections are conducted.

Most states require candidates and parties that have not previously garnered a significant number of votes at the national level and that wish to appear on the ballot to collect a minimum number of signatures — that is, a percentage of the total number of registered voters. Such a requirement puts minor parties and less recognized candidates at a disadvantage, as does some states’ imposition of a “filing fee” to cover the costs of the ballot process. Incumbents usually have more money and resources to devote to the cause.

The predominantly two-party nature of the U.S. political system has fueled the ballot-access debate. Supporters of ballot-access restrictions view the matter from a practical standpoint, arguing that the established procedures and access criteria have deterred large numbers of unqualified candidates from appearing on ballots, thereby alleviating stress in the system and confusion within the electorate.

By contrast, reformers contend that stringent access criteria prevent competition and even alienate third-party candidates who are unable to collect the requisite number of signatures to appear on the ballot. In addition, such candidates must contend with the name recognition that gives incumbents of the two major parties a distinct advantage.

Political apathy and disinterest further diminish the likelihood that a qualified newcomer will be able to meet access criteria. Such criteria stifle the political dialogue and limit discourse to those issues favored by the two major parties. Finally, reformers contend that by narrowing the field of new and entrepreneurial candidates, ballot-access restrictions reduce the quantity and quality of choices available to voters, and thus have contributed to the declining levels of voter turnout.

The right of candidates and political parties to be on the ballot is not unlimited. Yet this right implicates the freedom of association, and the courts have ruled that the government’s authority to regulate elections cannot make ballot access unduly burdensome. In Bullock v. Carter (1972), the U.S. Supreme Court found that the payment of a filing fee to run for office was unconstitutional. Although the Court based its ruling on the equal-protection clause, it also discussed how the fee affected conduct protected by the First Amendment.

In Williams v. Rhodes (1968), the Supreme Court again used the equal-protection clause to invalidate state laws, making it virtually impossible for Alabama governor George C. Wallace to appear on the Ohio presidential ballot. Ohio laws required candidates to collect a large number of signatures and parties to form committees well in advance of the election. Conversely, in Storer v. Brown (1974) the Court upheld a state law requiring an independent candidate running for office to demonstrate disaffiliation from a party for a least one year. And yet in Anderson v. Celebrezze (1983) the Supreme Court invalidated on First Amendment grounds a state law that imposed early filing requirements for an independent presidential candidate who wished to appear on the general election ballot.

Often, independent and third-party candidates are required to collect and file a minimum number of signatures in order to appear on the ballot. If that minimum threshold is too high, the courts may invalidate the threshold or requirement as a First Amendment violation, but precedents have not been completely consistent. In Illinois State Board of Elections v. Socialist Workers Party (1979), the U.S. Supreme Court ruled that a state law requiring a minor party to obtain more than 25,000 signatures to appear on the ballot violated its First Amendment rights. Later, in Norman v. Reed (1992), the Court ruled that requiring a third-party candidate to collect 25,000 signatures within the city of Chicago to appear on the ballot was not a First Amendment violation.

In Munro v. Socialist Workers Party (1986), the Court upheld a requirement that a party secure at least one percent of the vote in a primary in order to gain a spot on the general election ballot. The Court noted that although the one percent requirement did impinge upon the First Amendment rights of the party, these rights were not absolute and it was not burdensome to require the party to demonstrate some minimum level of support to appear on the ballot.

Finally, in Timmons v. Twin Cities Area New Party (1997) the Court upheld, against a First Amendment challenge, a state “antifusion” law barring a candidate from one political party from appearing on the ballot as an endorsed candidate for another political party. The Court’s reasoning here was that the compelling interest in preventing fraud and voter confusion outweighed any First Amendment claims to ballot access.

Overall, although the courts have been hostile to the payment of fees to obtain ballot access, other requirements in place to demonstrate that candidates or political parties have sufficient political support have been upheld as legitimate governmental interests in regulating elections.