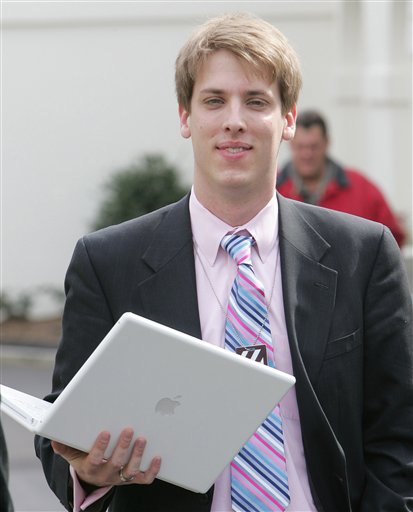 Over the last decade, blogging has become perhaps the most popular new form of communication. For its supporters, blogging fulfills the fundamental First Amendment principle of greater participation in the marketplace. Its detractors counter that the mob of blogs has little regard for accuracy and contributes to a more uncivil society. In this photo, blogger reporter Garrett M. Graff walks from the White House pressroom, Friday, March 11, 2004. White House Press Secretary Scott McClellan said Graff was believed to be the first blogger to be credentialed to attend his morning press gathering and his televised briefings at the White House. (AP Photo/Ron Edmonds, used with permission from the Associated Press)

Blogging became perhaps the most popular new form of communication at the beginning of the 21st century. Its supporters trace a historical linkage to the pamphleteers of the Revolutionary War era who criticized the British and royal Colonial governments, often in anonymous tracts.

Blogging has created new challenges for the First Amendment

For its supporters, blogging fulfills the fundamental First Amendment principle of greater participation in the marketplace. Its detractors counter that the mob of blogs has little regard for accuracy and contributes to a more uncivil society. Whatever the truth, there is no question but that blogging has created new challenges for the First Amendment and the legal system. In that sense, it is a First Amendment fantasy or nightmare.

Blogs are online journals that started in the 1990s

In the late 1990s, a new medium developed on the Internet that increased the participatory nature of online expression. Computer programmer and author Jorn Barger coined the term weblog to refer to his website, which consisted of a series of links to news articles and other websites he found interesting and informative. Barger formed the term by combining the words website and logging.

In 1999 Peter Merholz, a writer, speaker, and computer expert, coined the term blog to refer to a weblog. The word caught on like wildfire, even prompting Merriam-Webster, the popular dictionary publisher, to name it the 2004 “Word of the Year.” It has since morphed into a verb — to blog — and now also forms part of a larger noun — blogosphere.

Blogs are online journals or diaries where individuals can post entries about the subjects that interest them most. Many bloggers link to other sites that contain interesting articles. Blogs, which exist on every topic imaginable, have become amazingly popular in a short space of time. Technorati.com claims to be tracking 112.8 million blogs and says that 175,000 blogs are created daily.

In 2007, during the war in Iraq, the Pentagon for the first time permitted a blogger to cover the military just like any ordinary journalist.

In 2007 the issue of bloggers as journalists surfaced in Congress as members of both houses considered a proposed federal shield law, the Free Flow of Information Act. Those who support bloggers contend that any blogger who engages in journalistic functions should be treated the same as writers in the print and broadcast world. Others contend that, unlike the established media, bloggers do not have built-in guards to ensure accuracy and thus are more likely to engage in a reckless disregard for the truth. On their face, some existing state shield laws seem to apply only to the established media.

Another major issue is what standard a court would impose on a defamation plaintiff to unmask a blogging flamethrower. Defamation plaintiffs do have a right to seek redress and restore their reputations, but, as the U.S. Supreme Court noted in Talley v. California (1960),  “Anonymous pamphlets, leaflets, brochures and even books have played an important role in the progress of mankind.” In McIntyre v. Ohio Elections Commission (1995), the Court observed that “anonymous speech is not a pernicious, fraudulent practice, but an honorable tradition of advocacy and dissent.”

A decade later, in Doe v. Cahill (Del. 2005), the Delaware Supreme Court addressed this issue in the context of a defamation suit filed by a town council official and his wife against an anonymous blogger known only as “Proud Citizen.” The Delaware high court ruled that a defamation plaintiff can obtain a court order forcing the unmasking of an anonymous blogger only if the plaintiff meets a summary judgment standard — that is, the plaintiff can show that he or she can meet the essential elements of a libel claim.

The court explained that “before a defamation plaintiff can obtain the identity of an anonymous defendant through the compulsory discovery process he must support his defamation claim with facts sufficient to defeat a summary judgment motion.”

Public employees blogging rights must be balanced with employers' interests

Another important First Amendment issue is whether public employers can discipline their employees who blog off-duty. In Pickering v. Board of Education (1968), the U.S. Supreme Court established that public employees have a right to speak out on matters of public concern, but that such a free expression right must be balanced against the employer’s interest in an efficient, disruptive-free environment. Future cases will test the application of this line of cases to the blogging public employee.

Blogging continues to grow exponentially as more and more people become acquainted with the power to become a pamphleteer. As blogging becomes more popular, the courts will be confronted with many more First Amendment concerns.