Cameras in the Courtroom

By Ruth Ann Strickland
Other articles in Issues Related to Speech, Press, Assembly, or Petition, Media, Freedom of the Press issues and topics 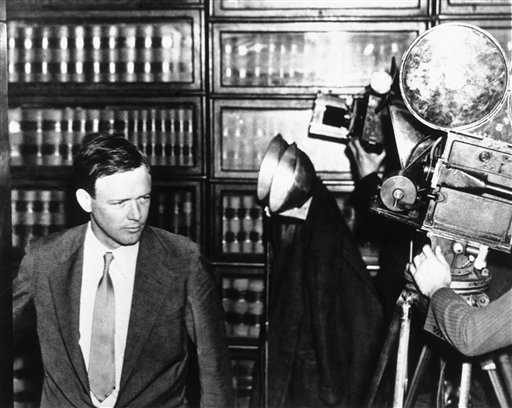 Placing cameras in the courtroom has historically stirred controversy. Proponents have invoked First Amendment provisions guaranteeing the public’s right to public information. Not until State v. Hauptmann (N.J. 1935) were cameras in the courtroom significantly challenged. Some 700 members of the media, including 120 cameramen, attended the trial of Bruno Hauptmann, who had been charged with the kidnapping and murder of aviator Charles Lindbergh’s baby son. In this photo, Lindbergh poses for a battery of movie cameras in the library of the Hunterdon County Courthouse at Flemington, NJ, on Jan. 3, 1935 before entering the courtroom to attend the trial of Hauptmann. (AP Photo, used with permission from the Associated Press)

Placing cameras in the courtroom has historically stirred controversy. Opponents and proponents have invoked First Amendment provisions guaranteeing the public’s right to public information, the Sixth Amendment’s rights to a fair and public trial, and the 14th Amendment’s due process protection.

Broadcasters have waged perennial battles, petitioning the courts to allow them to record judicial proceedings. Concern about media coverage of trials stems in part from past media trial circuses.

Not until State v. Hauptmann (N.J. 1935) were cameras in the courtroom significantly challenged. Some 700 members of the media, including 120 cameramen, attended the trial of Bruno Hauptmann, who had been charged with the kidnapping and murder of aviator Charles Lindbergh’s baby son.

Messenger boys ran about, and unruly photographers climbed on witness tables to get shots, blinding witnesses with their flash bulbs. Although the New Jersey Court of Appeals rejected Hauptmann’s allegation that the presence of courtroom cameras denied him a fair trial, the American Bar Association in 1937 and again in 1952 amended Canon 35 of its Canons of Judicial Ethics to forbid photographic, television, and other broadcast coverage of trials.

In the 1960s, Texas ignored Canon 35 and gave presiding judges broad discretion in allowing cameras in the courtroom.

Texas subsequently produced the landmark Estes v. Texas (1965), which served for almost 20 years as the basis for denying such access. Allegations of massive swindling against financier Billie Sol Estes had attracted national media attention. The trial judge permitted television and photographic coverage of the pretrial and trial proceedings.

The Supreme Court overturned Estes’s conviction on the ground that the camera coverage so distracted trial participants as to deprive him of a fair trial.

The following year, in Sheppard v. Maxwell (1966), the Court ordered a retrial of Dr. Samuel H. Sheppard, whose trial for the murder of his wife was also marred by extensive media coverage.

Court said states could experiment with cameras in the courtroom

In the late 1970s, Florida began a pilot program in which electronic media covered judicial proceedings in all its state courts without the consent of trial participants.

This led to Chandler v. Florida (1981). In this case, two Miami Beach police officers were exposed by an amateur radio operator who overheard and recorded conversations between them over their walkie-talkies during their commission of a burglary. The case attracted national media attention. The defendants, objecting to televised coverage of their trial, sought to have Florida’s experimental program declared unconstitutional.

Despite their attempts to prevent the coverage, a single television camera was placed in the courtroom during the state’s presentation of its case; no camera was present when the defense presented its evidence. Only a brief part of the trial, the prosecution’s presentation, was actually telecast.

After being convicted, the defendants asserted that the television coverage had deprived them of a fair and impartial trial. The Supreme Court held that absent a constitutional prohibition of such coverage, states should be allowed to experiment with it even if a defendant objected. Furthermore, it ruled that barring a showing that coverage is prejudicial to a fair trial, an absolute ban on news reporting and broadcasting of trials could not be justified.

This ruling, while not requiring states to admit cameras into their courtrooms, went a long way toward putting to rest the fears expressed in Estes respecting the influence of cameras on the fairness of trials.

Although defendants have a right to a public trial, the courts have yet to rule that they have a right to a televised trial. The Judicial Conference and most federal judges have generally rejected television and camera coverage of court proceedings, arguing that live television broadcasts, in particular, distract trial participants, prejudice trial outcomes, and thus deprive defendants of fair trials.

Some witnesses fidget nervously before cameras, possibly harming their credibility with jurors. Opponents also argue that the broadcasting of trials leads lawyers to grandstand for the camera, diminishing courtroom decorum.

Broadcasters counter that today’s technology is no longer disruptive and that the courts as well as the general public benefit from broadcasts of court proceedings.

They assert that such broadcasts educate the public and allow them to see how justice is (or perhaps is not) carried out. They claim that under the watchful eyes of thousands of viewers, the judge, attorneys, and jurors are more likely to pay careful attention to the facts of a case and be on their best behavior, helping to ensure fairer trials. State court judges have traditionally been more open to broadcaster arguments than have federal judges.

States vary in how liberal they are in allowing cameras

As of 2006, all 50 states allowed some type of camera presence in their courtrooms.

Fifteen states moderately restricted coverage, and 19 had a more liberal approach. Sixteen states had rules that disallowed most coverage.

Starting in 1997, various members of Congress introduced “sunshine in the courtroom” acts to give presiding judges in federal courts the discretion to permit camera coverage. Two federal appellate circuits currently allow camera coverage in civil appellate proceedings. So far, most federal judges have declined to voluntarily permit cameras in their courts.

Renewed debate on cameras in the courtroom followed in the wake of Court TV’s gavel-to-gavel coverage of the trial of former football star O.J. Simpson — for the 1994 murders of his ex-wife Nicole Brown Simpson and one of her acquaintances, Ron Goldman — and the controversy surrounding the jury verdict.

Cameras have been banned in high-profile trials

Judges, asserting a desire to avoid a media feeding frenzy, banned television cameras from their courtrooms in a number of high-profile trials, including that of:

Such precedents leave the status of future coverage in doubt.