By Alex Aichinger (Updated June 2017 by John R. Vile)
Other articles in Categories of Laws and Proposed Laws, Issues Related to Speech, Press, Assembly, or Petition 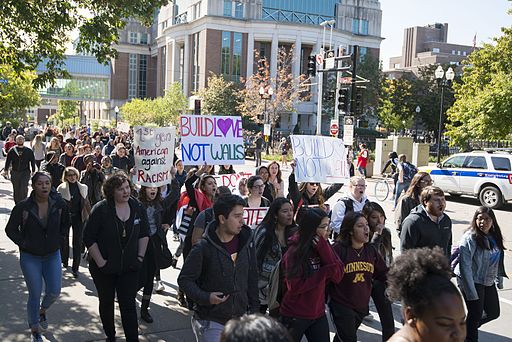 Speech codes at public U.S. colleges and universities remain common features on campus despite federal courts having consistently ruled that they violate students’ First Amendment speech rights.  In this photo, University of Minnesota students protest racism and bigotry on campus in October 2016 after a mural by the College Republicans student group prominently displayed the words "build the wall", a slogan of presidential candidate Donald Trump. (Photo by Fibonacci Blue, via Flickr, CC-BY-2.0)

Debates over the appropriateness and constitutionality of campus speech codes focus on whether school officials’ drive to protect students from offensive comments justify limiting freedom of speech.

After the 1970s, the number of women and minority students on campuses significantly increased as a result of expanded recruiting efforts by colleges and universities and federal policies. Incidents of racist, homophobic, and sexist harassment also increased.

Universities, beginning with the University of Wisconsin, responded with campus speech codes prohibiting offensive or intolerant speech directed at individuals or groups based on their race, color, religion, ethnicity, disability, sex, age, or sexual orientation.

Although speech codes limit student speech, universities justify such limitations on any or all of three grounds:

Justification concerning educational purposes resembles the compelling interest argument used by the Supreme Court in United States v. O’Brien (1968), in which the justices declared incidental restrictions of speech rights as permissible if these restrictions are narrowly tailored and necessary to pursue compelling governmental interests.

Proponents of university speech codes claim that one of the essential interests of education is to promote a diverse and tolerant society, and limiting speech that is injurious, offensive, or demeaning furthers that essential interest.

Universities also note that the First Amendment’s speech guarantee is qualified and does not protect certain kinds of speech.

The First Amendment offers absolute protection of speech only when its purpose is to advance worthy societal and political objectives.

In Chaplinsky v. New Hampshire (1942), the Supreme Court determined that the right to free speech does not extend to a lower class of discourse characterized as “the lewd and obscene, the profane, the libelous, and the insulting or ‘fighting words.’”

Campus speech codes specifically prohibit these categories of speech.  Such codes are sometimes justified as a way of preventing the creation of a “hostile environment” that sanctions sexual harassment, although colleges and universities have ways of combatting chauvinism other than by forbidding all chauvinistic speech.

Speech codes protect the rights of the victim by preventing the so-called heckler’s veto, a lawful function upheld by the Supreme Court in Terminiello v. Chicago (1949).

A heckler’s veto occurs when an opponent effectively silences a speaker by either causing a disturbance or threatening a disturbance. Campus speech codes prevent the equivalent of a heckler’s veto by prohibiting harassing or demeaning speech directed at such speakers. A student who suffers such a verbal attack may be so intimidated and humiliated that he or she cannot respond. To allow free speech for all, the offensive speech of some can and must be curtailed.

First federal challenge to speech code was in Michigan

The court ruled the code to be unconstitutional on the grounds of vagueness, overbreadth, and viewpoint discrimination.

The code’s vagueness included wording that made it “simply impossible to discern any limitation on its scope,” because the terms used in it — for example, stigmatize and victimize — were not self-defining. That vagueness also resulted in the code being overly broad, as the court found it “impossible to discern between protected and unprotected conduct.”

The university’s policy prohibited “certain speech because it disagreed with ideas of messages sought to be conveyed.” This is the essence of viewpoint discrimination and a violation of the First Amendment. Since the Doe decision, other courts have applied its rationale to similar speech code challenges.

Although the Supreme Court has not offered an opinion in a speech code case, its ruling in R.A.V. v. St. Paul (1992) indicates that it would likely be sympathetic to the reasoning used by the Michigan court.

The City of St. Paul had enacted an ordinance prohibiting the display of such symbols as swastikas or burning crosses if it was known or should be known that such an action would arouse “anger, alarm or resentment in others” on the basis of their race, gender, color, religion, or creed.

Under this ordinance, a local teenager (R.A.V.) was charged and convicted for burning a cross on the front lawn of an African American family.

On appeal, the Supreme Court held that St. Paul’s hate crime law violated the First Amendment. As Justice Antonin Scalia explained for the Court, the First Amendment “prevents the government from proscribing speech because of its disapproval of the ideas” expressed by that speech.

Viewpoint discrimination is prohibited, even if the views are offensive, intolerant, or simply incorrect in the minds of many or most in society. Should the question of campus speech codes reach the Court, it would, in all likelihood, apply the doctrines of vagueness, overbreadth, and viewpoint discrimination in its deliberations.

'Marketplace of ideas' approach embraced by some

Opponents of campus speech codes generally adopt the position expressed by Justice Oliver Wendell Holmes Jr. in his dissent in Abrams v. United States (1919): “The best test of truth is the power of the thought to get itself accepted in the competition of the market.”

Although the views expressed by some individuals, including students, may be incorrect, demeaning, or offensive, the best way to counter these views is to challenge them in the open marketplace of ideas, not to silence them.

The controversy over campus speech codes continues. The Foundation for Individual Rights in Education (FIRE), a Philadelphia-based civil liberties group, has taken particular interest in challenging such speech codes.

Two notable developments related to campus speech have occurred over the past few years.

One is the demand on some campuses for so-called “safe spaces” where students (sometimes segregated by race) can be free of discussions of subjects that they would prefer not to hear.

The other is the demand for “trigger warnings” when a professor believes that a given subject or work on literature might prove to be disturbing to some class members.

Both pose serious challenges to traditional ideas that portray college and university campuses as open forums for ideas. One might well remember the observation of Justice Oliver Wendell Holmes, Jr. in Gitlow v. New York (1925) that “every idea is an incitement.”