By Joe Sandler
Other articles in Issues Related to Speech, Press, Assembly, or Petition 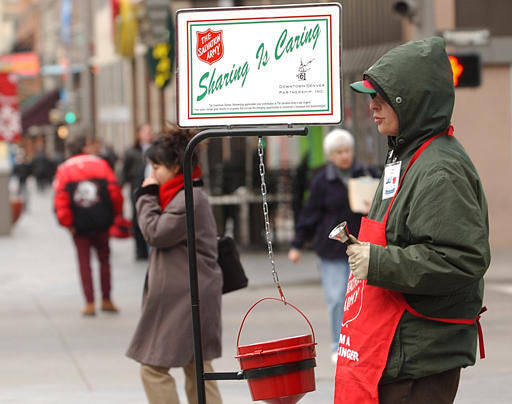 While laws aimed at curbing solicitations by charities have been overturned on First Amendment grounds, charities can be required to disclose how their money is spent. In this photo, Salvation Army bell ringer Edgar Blair, 56, works Denver's 16th Street Mall on Monday, Dec. 13, 2004. The Salvation Army raises donations through their famous kettles during the holiday season. (AP Photo/Ed Andrieski, used with permission from the Associated Press)

Almost all of the states now regulate the solicitation of contributions from the public by charitable organizations.

Many state legislatures began enacting regulatory regimes in the 1970s and 1980s amid media accounts of well-known charities spending most of their funds for administrative costs rather than for actual charitable programs.

A number of the first such laws sought to impose direct limits on how much a charity could spend on administrative and fundraising costs. The Supreme Court, however, issued three rulings invalidating such limits under the First Amendment.

In Schaumberg v. Citizens for a Better Environment (1980), the Court held unconstitutional a state law banning in-person solicitations by charitable organizations spending more than 25 percent of their receipts for fundraising and administration.

The Court ruled that the First Amendment protected charitable appeals in that soliciting contributions for organizations is a necessary part of being able to function, and solicitations themselves often contain and advance the group’s views; that any regulation must therefore be narrowly tailored to serve a legitimate state interest; and that the state law was not narrowly tailored to prevent fraud.

A few years later, in Secretary of State of Maryland v. Joseph H. Munson Co., Inc. (1984), the Court invalidated a state law imposing a similar 25 percent limitation but with the possibility of obtaining a waiver by showing that the charity could not effectively raise contributions without spending more than 25 percent on overhead and fundraising costs.

Again, in Riley v. National Federation of the Blind (1988), the Court invalidated a law prohibiting professional fundraisers from retaining an “excessive” fee, with the Court finding that “using percentages to decide the legality of the fundraiser’s fee is not narrowly tailored to the State’s interest in preventing fraud.”

Regulations requiring disclosure have been upheld

While these three decisions established that states cannot impose direct limits on charities’ fundraising costs, more recent decisions have allowed states to require charities to disclose truthfully how much of their funds are used for their charitable programs.

In Illinois ex rel. Madigan v. Telemarketing Associates, Inc. (2003), a unanimous Court upheld a state’s ability to sue fundraising firms for fraud for misrepresenting to donors how much of their contributions to a veterans’ group would go toward actually helping veterans: “So long as the emphasis is on what the fundraisers misleadingly convey, and not on percentage limitations on solicitors’ fees per se, such actions need not impermissibly chill protected speech.”

Charitable organizations that employ such methods as door-to-door or telephone solicitation or direct mail must comply with these laws in all the states in which they operate. Less clear is whether registration is required of firms soliciting only via the Internet. The burden of complying with 40 or 45 state registration laws and the ease of Internet solicitation are bound to combine to raise interesting legal questions and challenges in the future.

This article was originally published in 2009. Joe Sandler is a member of the firm Sandler Reiff Lamb Rosenstein & Birkenstock, P.C., in Washington, D.C.