By Sara L. Zeigler (Updated May 2017 by John R. Vile)
Other articles in Issues Related to Speech, Press, Assembly, or Petition 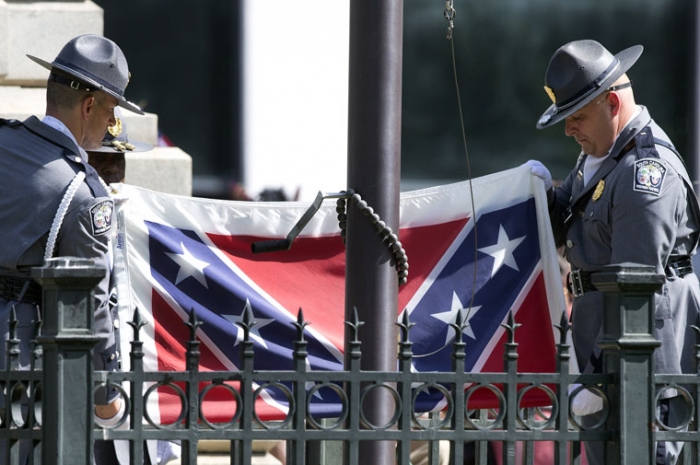 The Confederate flag continues to generate controversy and impassioned debates with implications for the First Amendment. Some people view the flag as a symbol celebrating racism and regard the use of Confederate symbols in state flags or their display on state property as offensive; to other individuals it represents Southern heritage, and they assert their right to display the flag of the Confederate South wherever they like. An honor guard from the South Carolina Highway patrol removes the Confederate battle flag from the Capitol grounds in Columbia, S.C., ending its 54-year presence there, on Friday, July 10, 2015. (AP Photo/John Bazemore, used with permission from the Associated Press)

The Confederate flag continues to generate controversy and impassioned debates with implications for the First Amendment.

The flag most commonly displayed as representing the Confederacy is the Beauregard battle flag, also known as the Southern Cross. This flag was widely used by Southern troops during the Civil War, but it was never officially adopted by the Confederacy. The appropriation of the Confederate flag by white supremacist organizations, such as the Ku Klux Klan, makes the debate over it particularly emotional.

Some people view the flag as a symbol celebrating racism and regard the use of Confederate symbols in state flags or their display on state property as offensive; to other individuals it represents Southern heritage, and they assert their right to display the flag of the Confederate South wherever they like.

The use of the battle flag in state flag designs reached the 11th Circuit Court of Appeals in 1997 in Coleman v. Miller, in which James Andrew Coleman sued to enjoin Georgia from flying the state flag over state office buildings.

Coleman, an African American, alleged that the use of the Confederate battle flag emblem in the state flag violated his right to equal protection under the Fourteenth Amendment and his right of free expression under the First Amendment. The Fourteenth Amendment argument focused on the exclusionary message that Coleman asserted the flag sent to him as an African American; he held that it represented the state’s segregationist history and slavery. The First Amendment argument focused on the flag as symbolic speech. Coleman proffered that, as a citizen, he was being forced to represent a position that he found morally repugnant.

The court focused most of its attention on the equal protection argument ultimately dismissing it. It also rejected the First Amendment argument, on the ground that the display of the flag did not compel the individual affirmatively to acknowledge the message represented by the flag. Had the state, however, required Coleman to display the flag on his license plate, it would have run afoul of the First Amendment.

Activists have campaigned for Confederate flag removal on state property

After the courts upheld the constitutionality of Georgia flag display, activists turned to other tactics to remove similar displays from public property.

The National Association for the Advancement of Colored People (NAACP) launched a campaign to remove the battle flag from the South Carolina state capitol, where it had flown since 1962. The campaign included an economic and tourism boycott coupled with an extensive public relations campaign that resulted in significant losses in revenue for the state.

The campaign initially ended in a compromise that removed the flag from the statehouse dome to a less prominent place on the grounds, where it served as part of a Civil War memorial. In 2015, Governor Nikki Haley signed a bill also removing this flag in the wake of the murder of nine black members of the Emanuel African Methodist Episcopal Church by a white supremacist.

Other states have also removed the Confederate Flag from state property, often in incremental fashion.

In 2001 Mississippi voters rejected a revised design of its state flag — which was adopted in 1894 and prominently displays the battle flag — making their state the only one that continues to incorporate the battle flag in its official flag. The University of Mississippi was among one of a number of institutions that removed this flag from the campus in the aftermath of the 2015 shootings in Charleston.

Courts have upheld removal of Confederate symbols in schools and workplaces

Other controversies involving Confederate symbols have involved the right of individuals to display such symbols in workplaces and in educational settings.

In 1997 the North Carolina Court of Appeals held in Johnson v. Mayo Yarns that an employer could compel an employee to remove a Confederate flag decal from his toolbox and that the employer’s decision to discharge him for refusing to do so did not violate Johnson’s First Amendment rights.

In 2000 in West v. Derby Unified School District, the Tenth Circuit Court of Appeals upheld a Kansas school district’s suspension of a student for drawing a Confederate flag on a piece of paper during math class. Because the school had acted under the auspices of a well-defined policy designed to prohibit racial harassment and to minimize disruption of the educational environment for other students, the court found that the policy did not limit protected speech. Other challenges to school policies have yielded similar rulings.

A number of institutions have subsequently renamed buildings that referenced Southern Civil War figures, and some cities, most notably New Orleans, have removed statues and monuments to Confederate war heroes.

This article first published in 2009 and has been updated. The primary contributor, Sara L. Zeigler, is the Dean of the College of Letters, Arts, and Social Sciences at Eastern Kentucky University. It has been updated by the First Amendment Encyclopedia.