By Frank Askin
Other articles in Issues Related to Speech, Press, Assembly, or Petition 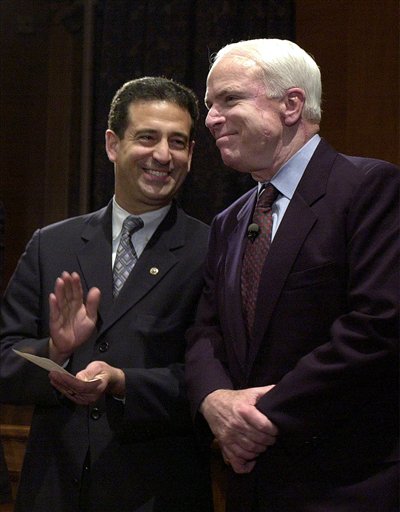 Issue advocacy refers to public statements and advertising on public issues that are unregulated by political campaign finance laws and regulations. For years, campaigns used fake issue advocacy advertisements to use more corporate money than they were supposed to. The Bipartisan Campaign Reform Act of 2002 created a new category of political advocacy, electioneering communications, to close this loophole in issue advocacy campaign advertisements.In this photo, Sen. Russ Feingold, D-Wis., left, and Sen. John McCain, R-Ariz., sponsors of the bill, smile during a rally on Capitol Hill in Washington in 2002. (AP Photo/Dennis Cook, used with permission from the Assoicated Press.)

Issue advocacy refers to public statements and advertising on public issues that are unregulated by political campaign finance laws and regulations. U.S. courts have accepted some limits on direct campaign contributions that, when applied directly to such issue advocacy, do not pass constitutional muster under the free expression provisions of the First Amendment.

The term issue advocacy grew out of the Supreme Court’s landmark case Buckley v. Valeo (1976), which held that the prohibition in the Federal Election Campaign Act of 1971 against certain contributions and expenditures “in connection with” federal elections could be read to prohibit only the “express advocacy” of the election or defeat of candidates for federal office. To read it more broadly would render the language vague and overbroad.

In a footnote to Buckley, the Court described express advocacy as language that literally urged the election or defeat of a candidate for federal office, such as “Vote for Jones” or “Defeat Smith.” Statements that did not meet the definition of express advocacy were issue advocacy. Issue advocacy communication could be financed with “soft” or unregulated money, which included funds from corporate or labor union treasuries or individual contributions in excess of the law’s contribution limits.

Fake issue advocacy ads were legal for a time

The consequence was an era of “sham issue advocacy” in which Congress’s efforts to remove corporate and labor money from federal election campaigns were greatly diluted. As long as a corporate or labor funded message clearly intended to promote or undermine a candidate avoided urging a vote for or against the person, it was perfectly legal.

Thus if the message described a candidate’s record in either glowing or derogatory terms, it escaped regulation so long as it did not urge a vote one way or the other. Such messages might end with a suggestion that the listener “Call Candidate X and tell him to keep up the good work,” or “Tell Candidate Y to change his unpatriotic ways.”

Congress acted to correct this “loophole” in the Bipartisan Campaign Reform Act of 2002, sponsored by Senators John McCain, R-Ariz., and Russ Feingold, D-Wis. The new law created a new category of political advocacy, “electioneering communications,” that cannot be funded by corporate or labor treasuries.

The Supreme Court upheld the electioneering communication provision in McConnell v. Federal Election Commission (2003) against claims that it violated the principle contained in the Buckley footnote. By a vote of 5-4, the Court ruled that the Buckley language was only illustrative, and thus it did not prohibit Congress from dealing with “sham issue advocacy,” which had the same effect as express advocacy. Although it upheld the electioneering communication provision on its face, the Court did not decide whether there might be such a thing as true issue advocacy, which was not intended to influence elections even though it met the statutory definition.

Some doubt also remains about how the provision affects advocacy by nonprofit organizations. In an earlier case, Federal Election Commission v. Massachusetts Citizens for Life (1986), the Supreme Court had held that such ideological corporations, so long as they did not accept contributions from business corporations or labor unions, were entitled to special protection under the free speech provisions of the First Amendment even for expenditures for “express advocacy.”

This area of the law is in considerable flux, and future developments may well be determined by changes in the membership of the Supreme Court. For example, in Federal Election Commission v. Wisconsin Right to Life, Inc. (2007) the Court upheld an as-applied challenge to the same provision of the Bipartisan Campaign Reform Act that was ruled constitutional in McConnell. As a result, the constitutional status of the distinction between issue and express advocacy made in the Bipartisan Campaign Reform Act may no longer be valid, and the earlier distinction found in Buckley may once again be constitutionally controlling.

This article was originally published in 2009. Frank Askin is a retired Professor Emeritus at Rutgers University, where he taught election law and constitutional law for 50 years. He is the longest serving General Counsel in the history of the American Civil Liberties Union. His most lasting legal accomplishment was having New Jersey recognize homeowner associations as quasi-governmental agencies, requiring them to recognize free speech rights for their residents.