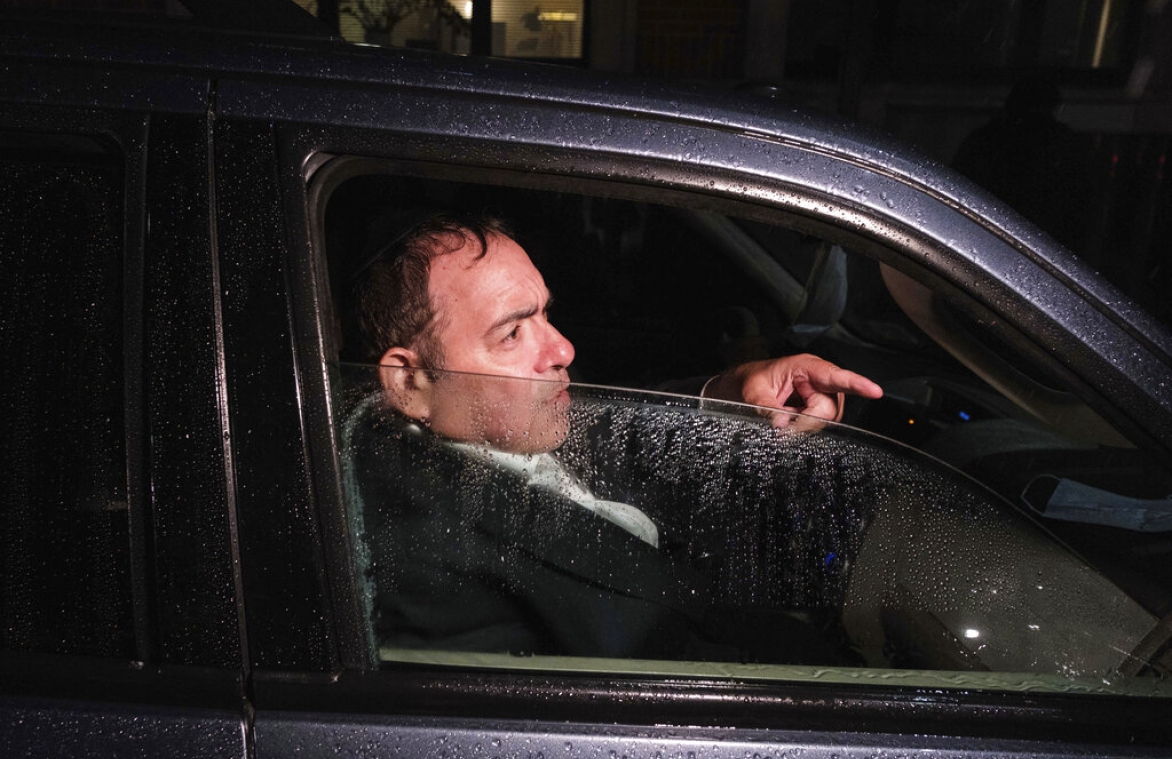 Heshy Tischler, a New York City Council candidate and activist in the Orthodox Jewish neighborhood of Borough Park, leaves Kings County Criminal Court after his arraignment Monday, Oct. 12, 2020, in New York. Tischler had been arrested on charges of inciting people to riot and unlawful imprisonment of a journalist who was chased and trapped by a crowd. (AP Photo/Yuki Iwamura)

NEW YORK (AP) — A leader of protests against new coronavirus restrictions in Brooklyn was ordered on Oct. 12 to stay away from a journalist who was chased and trapped by a crowd.

Judge Edwin Novillo told Heshy Tischler, who is charged with inciting people to riot and unlawful imprisonment of a journalist, that he would be subject to getting arrested again if he had any contact — or had someone else get into contact on his behalf, including through social media — with Jewish Insider journalist Jacob Kornbluh.

Tischler, a City Council candidate and activist in the Orthodox Jewish neighborhood of Borough Park, had been arrested in connection with his actions during an Oct. 7 street protest.

Video shows a crowd of men, egged on by Tischler, surrounding, jostling and taunting Kornbluh, who has been reporting on resistance to social distancing in the neighborhood. Tischler, who was not wearing a mask, can be seen screaming in Kornbluh's face. Kornbluh, who is also an Orthodox Jew, said he was struck and kicked during the incident.

Tischler called his arrest a "political stunt" on Twitter. He has said he believed his interactions with Kornbluh were protected by the First Amendment.

In another act of intimidation, several dozen men gathered outside Kornbluh's apartment late Sunday to protest Tischler's arrest.
On Monday, during the video hearing, Tischler's attorney Abraham Hoschander protested against the judge implementing the order of protection against his client, saying he "poses no danger whatsoever."

Tischler was released on his own recognizance and ordered to return to court on April 27.

The majority of the areas facing lockdowns are home to large Orthodox Jewish populations, and religious leaders have complained of being singled out. The spike in cases coincided with the back-to-back Jewish holidays in late September.

Cuomo said on Oct. 11 that the so-called cluster areas contain 2.8% of the state's population, yet have had 17.6% of all positive confirmed cases reported this past week. The Democratic governor urged people living in those areas to abide by the restrictions even though the new rules ban large gatherings in synagogues.

Tischler has led some of the opposition, cutting the chains off playgrounds in the spring after they were ordered closed by the state and recently disrupting a news conference by the head of the city's hospital system.