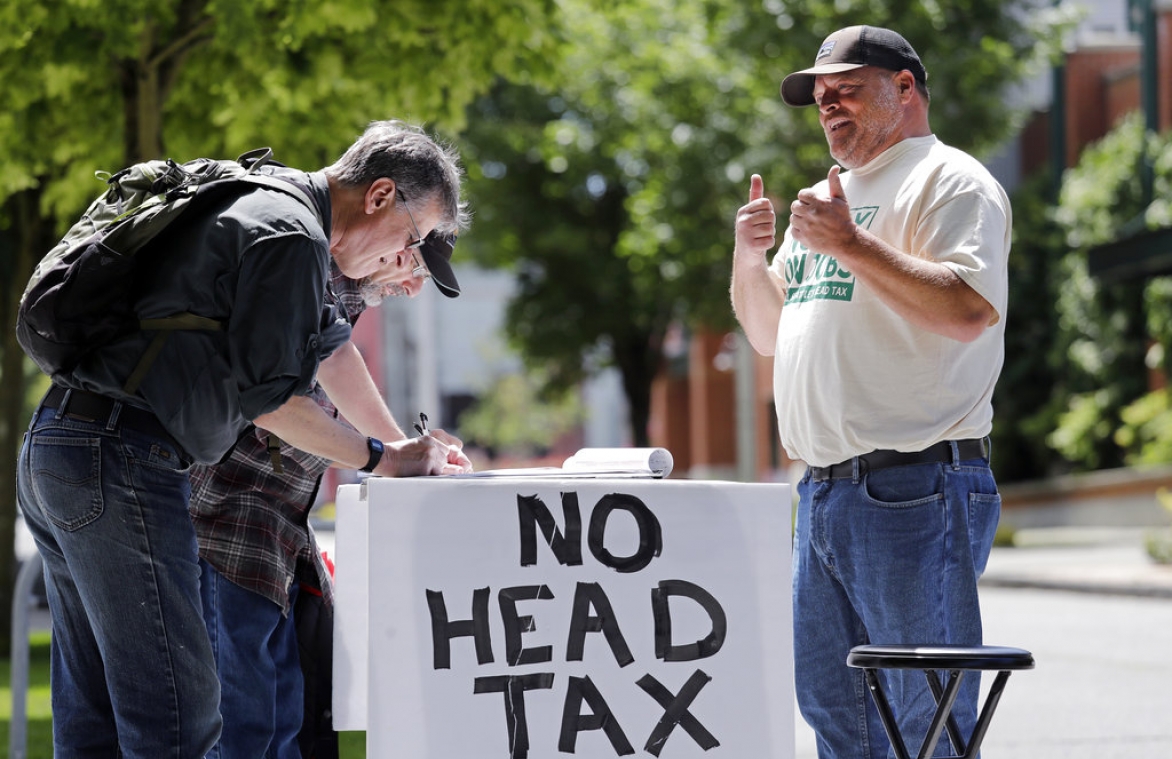 In this May 24, 2018, photo, paid signature gatherer John Ellard, right, gives thumbs-up as two men stop to sign petitions to put on the November ballot a referendum on Seattle's head tax, in Seattle. Seattle city leaders say they'll work to repeal the tax passed just last month on businesses such as Amazon and Starbucks designed to help pay for homeless services and affordable housing. Amazon and other businesses had sharply criticized the levy, and the online retail giant even temporarily halted construction planning on a new high-rise building near its Seattle headquarters in protest. (AP Photo/Elaine Thompson)

SEATTLE (AP) — Seattle has agreed to pay $35,000 to settle an activist's lawsuit alleging the City Council broke Washington's open public-meetings law in its abrupt repeal of a head tax on big businesses two years ago.

In exchange, open government activist Arthur West has agreed to drop his case.

The agreement, under which the city admitted no wrongdoing, brings to a close litigation spawned by the council's behind-the-scenes maneuvering with Mayor Jenny Durkan's office to scuttle the so-called Employee Hours Tax a few weeks after passing it in mid-2018.

The settlement comes about six weeks after West won a key ruling in the state Court of Appeals Court that revived his lawsuit, which a King County judge previously had dismissed.

In an email on Oct. 19, Dan Nolte, a spokesman for City Attorney Pete Holmes, said the city concluded a settlement would cost less than continuing to litigate.

"This was the prudent decision, and we're pleased to have this matter concluded," Nolte's email said, adding the settlement doesn't change the outcome of the council's vote to repeal the head tax.

The Oct. 19 agreement with West is the city's second settlement over allegations that the council broke the state's Open Public Meetings Act around the tax repeal.

In 2019, the city agreed to pay $3,500 to attorney James Egan and provide council members with further training on the open-meetings law, to settle Egan's separate suit over the matter.

West and Egan sued the city in June 2018 after The Seattle Times reported that open-government advocates had raised concerns over the council's abrupt repeal.

Both suits contended the council broke the meetings law with the aid of Durkan's top deputies through a series of secret texts and phone calls in the days before members formally voted during a special meeting to drop the tax.