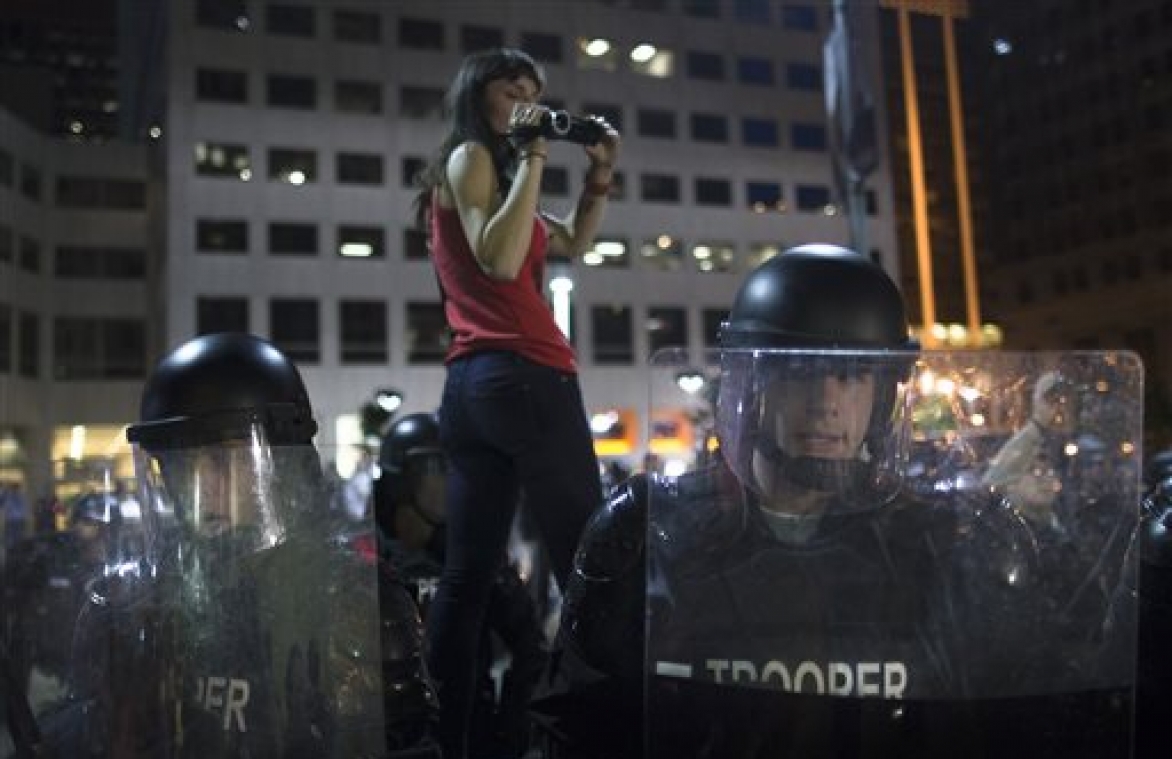 The right of individuals to film police has become a clearly established First Amendment right as more courts have recognized it. The pervasiveness is important in civil rights lawsuits to overcome a defense based on qualified immunity, which protects police from liability if those rights are not clearly established. In this 2015 photo from Cleveland, a protestor films riot police as they advance on a small march against the acquittal of Michael Brelo, a patrolman charged in the shooting deaths of two unarmed suspects. (AP/John Minchillo, with permission from The Associated Press.)

Across the United States, individuals continue to face reprisals, even arrests, for attempting to videotape, film, or record police activities in public.  This is unacceptable in a constitutional democracy.   It also violates the First Amendment.

Fortunately, there is now greater public awareness about individuals’ rights to film the police.  It appears that at least some police departments are getting the message too. Consider what has happened in Lafayette, Louisiana.

In March 2017, a police officer snatched Chelline Carter’s phone, deleted her picture, and even threatened her with arrest after she took a photo of her son in the back of a police car.

The ACLU of Louisiana sued on her behalf and obtained a settlement in January 2018. As part of the settlement, officers in the department have to be trained on the public’s First Amendment rights, including videotaping and recording the police.

“People have a constitutional right to take photographs of things in public spaces – and that includes the police and other government officials,” said Jane Johnson, Interim Executive Director of the ACLU of Louisiana, in a press release.

Johnson is correct.  Several courts also have held that people have such a First Amendment right.  For example, last year, the 3rd U.S. Circuit Court of Appeals recognized the right in Fields v. City of Philadelphia.

The 3rd Circuit noted the trend in other courts finding a free-speech right to record the police: “Today we join this growing consensus. Simply put, the First Amendment protects the act of photographing, filming, or otherwise recording police officers conducting their official duties in public.”

I explain in my journal article: “The value of at least some film recordings of the police cannot be overstated. Because of some disturbing videos of police overreactions, citizen awareness has been heightened. More members of the public are demanding accountability and action as a result of recordings of police-citizen encounters.”

The pervasiveness of this First Amendment right should be important, because citizens should be able to overcome the qualified immunity defense in civil rights lawsuits.  Qualified immunity is a legal doctrine that protects the police and other government officials from liability for even unconstitutional conduct if those rights are not clearly established.

However, with each passing day, the right of citizens to videotape and record the police is a clearly established First Amendment right.