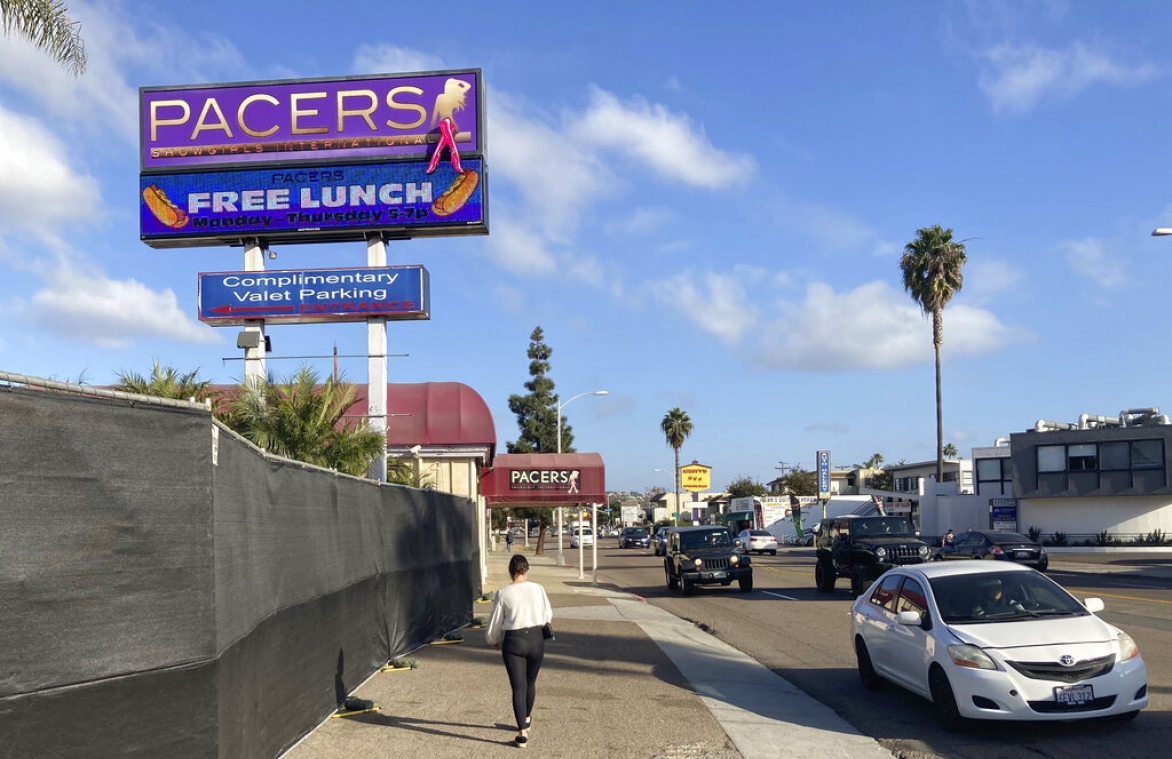 A pedestrian walks past Pacers Showgirls International in San Diego, on Dec. 10, 2020. While California's new stay-at-home order has shut down restaurant dining, shuttered salons and kept church services outside, two strip clubs in San Diego are still welcoming patrons nightly, protected by a court order. San Diego County officials on Dec. 9 voted 3-2 to appeal the judge's ruling that has allowed Pacer Showgirls International and Cheetahs Gentleman's Club to stay open after the establishments sued the county and state over being ordered to close their doors. (AP Photo/Elliot Spagat)

San Diego County officials on Dec. 9 voted 3-2 to appeal the judge's ruling that has allowed Pacers Showgirls International and Cheetahs Gentlemen's Club to stay open after the establishments sued the county and state over being ordered to close their doors.

The judge issued a preliminary injunction on Nov. 6, protecting the establishments from enforcement actions by state and local officials, though the businesses must still adhere to a 10 p.m. curfew and close early.

San Diego Superior Court Judge Joel R. Wohlfeil sided with the clubs, saying adult live entertainment is "constitutionally protected speech" and said the harm would be greater to the businesses than to the government.

That argument set the strip clubs apart from restaurants or gyms, whose pleas to allow indoor activity was rejected by another San Diego judge last month when the county moved into the state's most restrictive tier because of spiraling coronavirus cases. Superior Court Judge Kenneth Medel said that the potential harm from undercutting the state's COVID-19 response outweighed damage to the affected businesses.

This week, San Diego along with most of the state was shut down even further as hospital bed capacity in intensive care units fell to dangerously low levels.

County officials said they cannot take action against the clubs while the injunction is in place even though there is a new stay-at-home order. But if Wohlfeil fails to lift it at a hearing next week, then supervisors will appeal.

The clubs sued the county in October after officials ordered them to close, saying live entertainment was not allowed under the public health order. Pacers received its cease-and-desist letter a few days after San Diego Padres outfielder Tommy Pham was stabbed in the club's parking lot.

The clubs say they are operating safely by keeping dancers six feet or more apart and requiring everyone to wear masks. County officials said that's not enough to comply with the new stay-at-home order, which bars social gatherings.

"I'm guessing most folks aren't going there with all the members of their household, so you have multiple households interacting together in a high-risk setting and so we ordered them closed," Supervisor Nathan Fletcher told reporters on Dec. 9.

Jason Saccuzzo, the lawyer representing Pacers, said its safety measures exceed those recommended by the U.S. Centers for Disease Control and Prevention by separating performers and audience members at least 15 feet apart. He said he knows of no coronavirus case being linked to either strip club.

He said officials are not allowed to disregard First Amendment rights even in times of a pandemic.

"The right of free expression applies not only to so-called 'strip clubs,' but to all live performers in California," he said in an email to The Associated Press on Dec. 10. "Unfortunately, the county has singled out adult entertainment venues for closure without any proof that live adult entertainment has resulted or will result in COVID-19 transmission."

Saccuzzo said he hopes the actions by the strip clubs will help other businesses win their battles as well "against the arbitrary and unconstitutional restrictions."

Paul Jonna, an attorney representing churches fighting to resume indoor services in California, said courts are finally stepping in to push back against pandemic rules that have ignored constitutional rights. He expects the U.S. Supreme Court ruling that sided with religious freedom over public health restrictions on a house of worship in New York to prompt courts to start protecting churches, like the way the San Diego judge did for the strip clubs.

"It just helps illustrate the absurdity of the current state of the law, which is that strip clubs have greater constitutional protection than churches," he said.

Amid the recent surge in virus cases, Democratic Gov. Gavin Newsom last week divided the state into five regions and said his administration would use intensive-care capacity in each one as a trigger for widespread closures. That trigger put the vast majority of the state's residents under stay-at-home-orders. The move has been decried by many small business owners and residents weary of the pandemic.

The explosive rise in infections began in October and is being blamed largely on people ignoring safety measures and socializing with others.
Under the measures, schools that are currently open can continue to provide in-person instruction. Retailers including supermarkets and shopping centers can operate with just 20% capacity, while restaurant dining and hair and nail salons must close.

Eugene Volokh, a law professor at the University of California, Los Angeles, said when the judge issued his order last month, comedy and music performances were still happening.

"My expectation is the judge is going to say, Look, now that all these places have been shut down at least for the duration of the lockdown ... strip clubs should also be shut down too," he said.

The order has been particularly stinging to small businesses that have struggled to survive over nearly a year in which they were repeatedly ordered to close then allowed to reopen but with complex safety precautions. Many business owners have said they can't afford to comply.