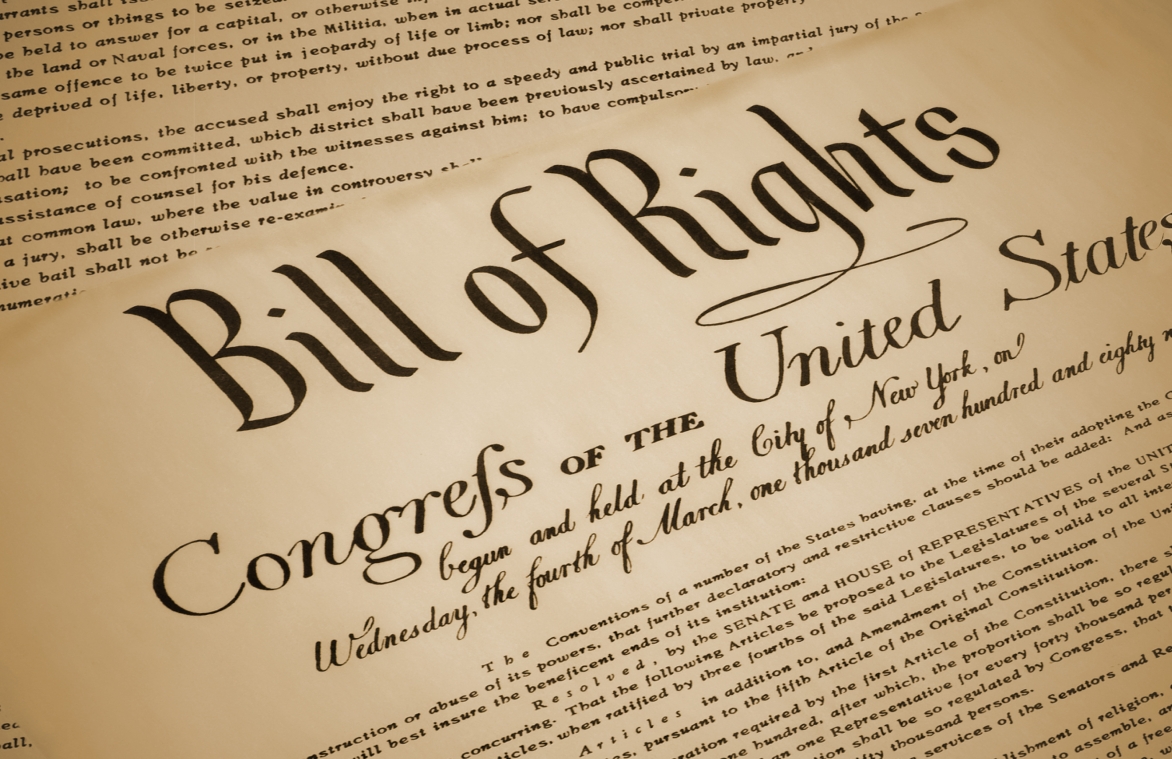 How well do you know your rights? Take the Bill of Rights quiz!

Today marks a hidden holiday, as uncelebrated as it is unappreciated. It was 229 years ago today that the United States ratified the Bill of Rights, ensuring unprecedented freedom for the people of an emerging nation.

Bill of Rights Day has actually been a national holiday since Nov. 28, 1941, when President Franklin Delano Roosevelt designated Dec. 15 “Bill of Rights Day.” Roosevelt had big plans, envisioning flag-flying and ceremonies nationwide. Roosevelt observed that Adolf Hitler feared “our freedom of speech, press and religion.” Unfortunately, the attack on Pearl Harbor on Dec. 7 erased all the ambitious plans to mark the date. There’s no time to celebrate freedom when you’re fighting to preserve it.

That was almost 80 years ago, and America continues to take the Bill of Rights for granted. At just 500 words, it packs more than 20 rights into 10 amendments to the U.S. Constitution. Moreover, a promise of a Bill of Rights was the key to getting the Constitution ratified in the first place.

Given that there won't be cake or gifts or greeting cards, the best way to celebrate Bill of Rights Day is simply to reflect on its importance. And depending upon your personal priorities, some liberties may loom larger than others.

The National Rifle Association touts the Second Amendment as America's “first freedom.” That's either bad math or poetic license, but you get the point. If our government took those freedoms away, you might have to wrest them back with “the right to bear arms.”

Americans with a deep and abiding faith are grateful for the freedom to worship and be free of government interference with their faith.

Those who treasure personal privacy and the sanctity of their homes would be thankful for the Fourth Amendment protection against unreasonable searches and seizures.

Those who have been accused of a crime would welcome the fair-trial guarantees contained in the Sixth Amendment.

All of these liberties are critical to the kind of nation we are, founded on freedom and fairness.

I am particularly grateful, though, for the one-two punch of freedom of speech and freedom of the press in the First Amendment. Together they protect our free expression and safeguard the entire Bill of Rights.

The preamble to the Constitution set forth the goal of "a more perfect union." The phrase was both aspirational and wise. There was no way a fledgling country could get everything right, let alone draw up a blueprint that would guarantee the liberty of every American.

And of course, the Constitution didn’t. Slavery was left intact, and women were left without a voice or vote. As lofty as America’s ideals were, there were still inequities and injustices to address.

It would take centuries of free speech and press to illuminate and address the needs of this imperfect union. Although critics of the contemporary press — which includes newspapers, radio stations, television stations, websites and every other form of informational media — like to use phrases like “fake news,” the truth is that the newspapers of 1791 were far more biased than their modern descendants. They were largely political organs full of outrage, exaggeration and lies. Yet it was in that very environment that the American people demanded a free press be a part of the Bill of Rights. They saw it as a check on a new and powerful central government and a protection against abuse of the Constitution — and yes, the new Bill of Rights. Journalists who do their jobs well today are fulfilling the mission set forth for them in 1791.

The most impressive thing about the Bill of Rights is that a document written 229 years ago remains so vital, vibrant and essential.

The aggressive journalists empowered by the First Amendment have gone on to monitor and irritate every president from John Adams to Donald Trump. The assembled citizens who spoke out against slavery and demanded universal suffrage have contemporary counterparts demanding racial justice today. Those 10 amendments have served us well.

Of course, when it comes to patriotic holidays, none rivals Independence Day. But that holiday recalls a nation just starting out, committing in general terms to a nation founded on liberty.

On Dec. 15, 1791, the first generation of Americans fulfilled that promise. We could love our country, but also voice our concerns about its actions and priorities. That honest exchange of ideas — fueled by freedom of press, speech and assembly — can make for dissonance and division in our politics. But it also makes for the strongest and most enduring nation on the face of the earth.

Ken Paulson is the director of the Free Speech Center at Middle Tennessee State University. Learn more about the First Amendment at freespeech.center.