Record number of journalists jailed because of their work 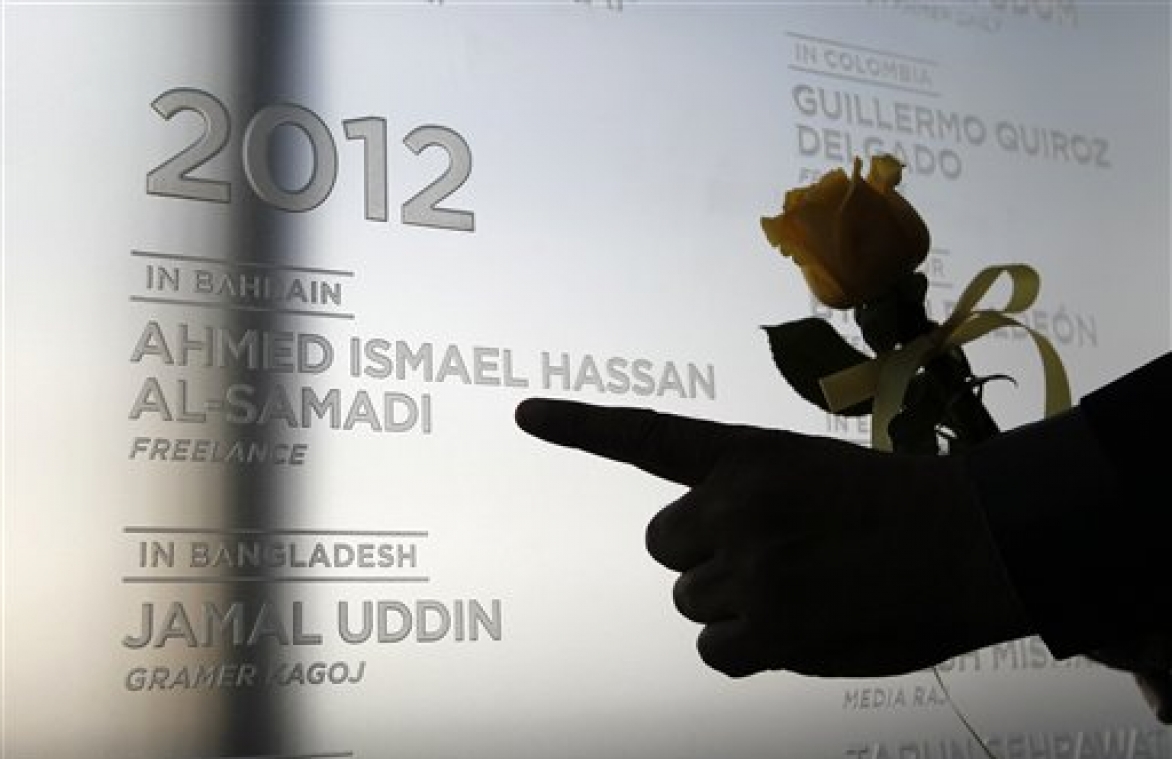 Ismaell Alsamadi points at the name of his son, journalist Ahmed Ismael Hassan Alsamadi, on May 13, 2013, during the Journalist Memorial Rededication of 88 journalists who died reporting the news in 2012, at the Newseum in Washington, D.C. Alsamadi was shot during a demonstration in Bahrain. (AP Photo/Jose Luis Magana)

NEW YORK (AP) — A record 274 journalists were in jail at the beginning of the month because of their work, nearly three dozen of them on charges of "false news," the Committee to Protect Journalists said on Dec. 15.

It has been five straight years where at least 250 journalists were in custody, which the committee says illustrates a crackdown by repressive governments. China is the top jailer, followed by Turkey and Egypt. Political unrest in Belarus and Ethiopia have led to big increases of reporters in custody there, the committee said.

So far this year, 29 journalists have been killed, the committee said. That's up from 26 last year, but represents a decrease from earlier in the last decade, where 74 journalists were killed in both 2012 and 2013.

At least in part because of the coronavirus, fewer journalists are out in conflict situations where they could be hit by crossfire, said Courtney Radsch, the committee's advocacy director. Twenty of the journalists killed so far this year were murder victims.

No journalists in the United States were killed and none were imprisoned at the beginning of the month. But 110 journalists in the U.S. were arrested and criminally charged in 2020, and around 300 were assaulted, many while covering protests in the wake of George Floyd's death, according to the U.S. Press Freedom Tracker.

The Committee to Protect Journalists has been concerned that President Donald Trump's criticism of "fake news" in the United States has influenced autocratic leaders in other countries. Jailings are up compared to several years past: The committee said there were 131 in 2005 and 92 in 2000.

The journalists' group hopes that President-elect Joe Biden can set a tone on the world stage by making a point of talking about press freedom.

Still, Radsch cautioned that "the world is not going to be undone all of a sudden just because we have a new U.S. president."

Forty-seven journalists were in jail in China, three of them for coverage related to China's response to the coronavirus pandemic, the committee said. There were 27 jailings in Egypt, at least three related to coronavirus coverage.

Journalists in Egypt and Honduras died after contracting COVID while in prison, the committee said.