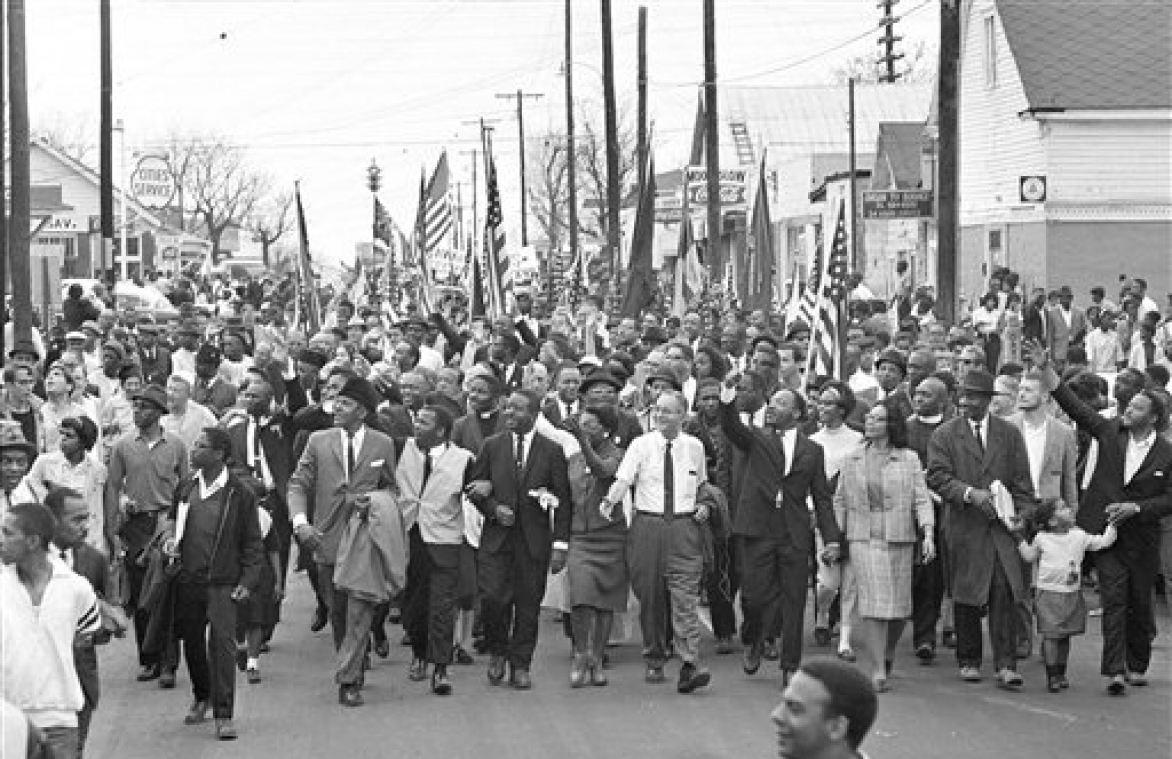 Dr. Martin Luther King Jr., fourth from right, waves as marchers stream across the Alabama River on the first of a five-day, 50-mile march to the state capitol at Montgomery, Ala., on March 21, 1965. (AP Photo)

This column expresses the views of Robert Bickel, professor emeritus of law at Stetson University College of Law, and Gene Policinski, senior fellow for the First Amendment, Freedom Forum.

When the Supreme Court declared in Brown v. Board of Education in 1954 that the segregationist doctrine of “separate but equal” was unconstitutional, our government, our society and our very selves were redefined.

With that decision, the court achieved equal status with the other two branches of government — legislative and executive — fulfilling the aspirations for our nation’s democracy.

In that watershed moment, a young Martin Luther King Jr. emerged as a fresh advocate and leader for a movement many hoped would use the high court’s decision to make democracy “real.”

King understood the power of the First Amendment and its guaranteed freedoms, especially the right to protest peacefully. He brought that power alive and helped realize the promise of Brown the following year when he spoke the words that gave the Montgomery, Ala., bus boycott its foundation:

“The only weapon that we have in our hands tonight is the weapon of protest. That’s all.”

With King’s words energizing a peaceful mass protest against racial injustice, the leaders and legions who were prompted to action in Montgomery after Rosa Parks was arrested for refusing to move to the back of a city bus set out to change the nation. They sparked social change and examination that continues today.

For those who want to better understand this and other touchstone events in the fight for civil rights, we have created a free online course, “The First Amendment and the Civil Rights Movement.” The lessons address important civil rights cases, with video interviews of leading figures and historical front pages of newspapers from the Newseum collection to set the scenes.

The course’s interdisciplinary, multimedia design makes it an excellent resource for teachers, public officials, social leaders and others who want to learn about the First Amendment’s roots in the nation’s search for racial justice over more than two centuries to “form a more perfect union.”

Because of the First Amendment, that mid-20th century movement of peaceful mass protest grew throughout the South and continued for a decade. The South’s resistance to Brown elevated the issue of racial segregation to a violation of the civil rights amendments. In turn, that propelled the federal courts at every level to reaffirm Brown in its most expansive terms — with a free press and free speakers tracking every move.

These cases challenged the courts from within to oppose those Southern district and appellate judges who openly espoused resistance to Brown. The Doctrine of Interposition — which allowed states to stand between the U.S. Constitution, the Bill of Rights and federal law — had to be overturned once and for all as an unconstitutional view of states’ rights.

The protests and petitions of the 1950s and 1960s led the White House and Congress to live up to their duty to enforce the human rights at stake in Brown, which required bipartisan political commitment and action. The result was the passage of the 1964 Civil Rights Act and the 1965 Voting Rights Act, crowning moments in congressional history.

The Black Lives Matter movement is today’s version of Selma, Ala., where nonviolent marchers in support of voting rights for Black Americans were met on the Edmund Pettus Bridge with billy clubs and tear gas. As David Halberstam wrote in his book “The Fifties,” the earlier movement educated the news media, and the media educated America. The First Amendment freedoms powered that education, then and now, by providing a free press and protecting the rights of those who marched as they sought to touch the conscience of the nation.

The First Amendment is a primary tool for those who seek to revitalize in the 21st century the efforts made in the last century to finally fulfill the promises of freedom and equality in the Constitution and the Bill of Rights.

Robert Bickel, professor emeritus of law at Stetson University College of Law, and Gene Policinski, senior fellow for the First Amendment at the Freedom Forum, are authors of “The First Amendment and the Civil Rights Movement,” created with the support of Stetson University and the Freedom Forum. The online course is available to all at no charge.