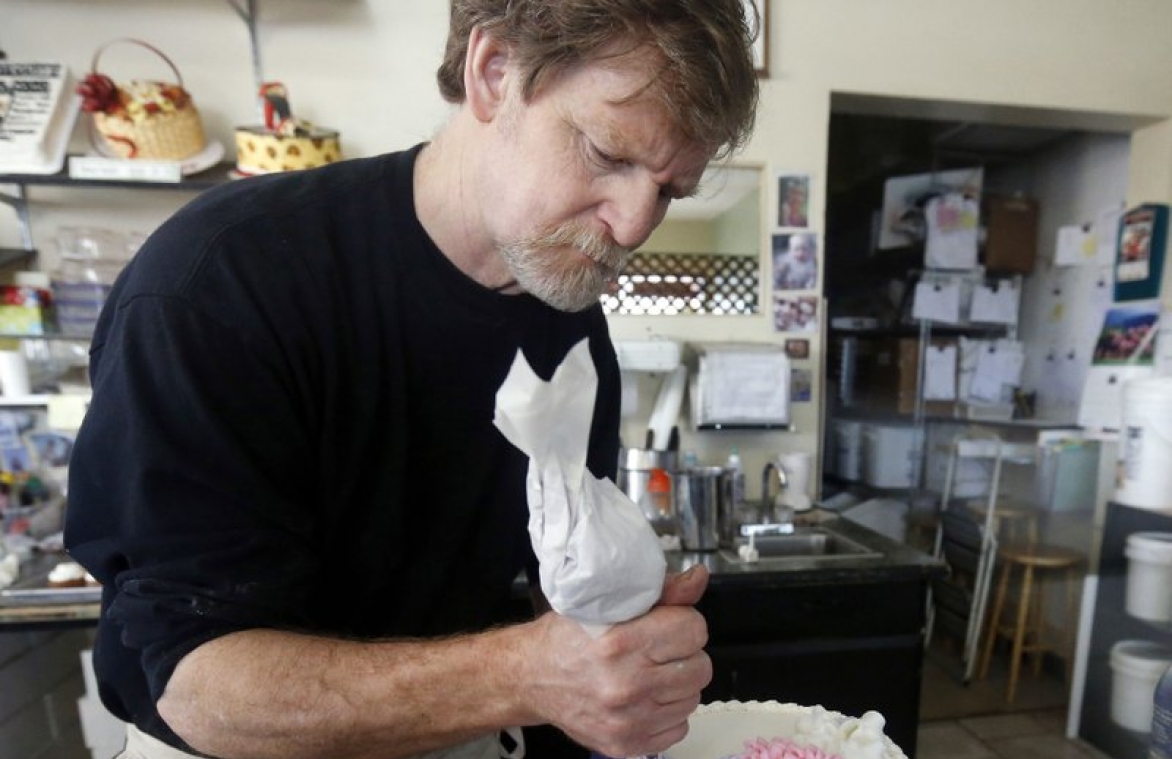 In this 2014 file photo by The Associated Press, Masterpiece Cakeshop owner Jack Phillips decorates a cake inside his Lakewood, Colo., shop. This week, the Supreme Court overturned a Colorado decision that said Phillips, based on his religious beliefs, violated the state's anti-discrimination laws when he refused to design a wedding cake for a gay couple. The court said Phillips had a First Amendment right to freely exercise his religion and could not be compelled to "speak" in favor of gay marriage.

Yesterday, the Court, by a 7-2 margin, sustained the Petitioner’s Free Exercise claim in Masterpiece Cakeshop v. Colorado Civil Rights Commission. Even so, there was much in the various opinions that either indirectly or directly addressed the Free Expression claims raised in the case.  The sketch below, replete with eight take away points, discusses that very issue.

Two First Amendment Claims:   “The freedoms asserted here are both the freedom of speech and the free exercise of religion. The free speech aspect of this case is difficult, for few persons who have seen a beautiful wedding cake might have thought of its creation as an exercise of protected speech. This is an instructive example, however, of the proposition that the application of constitutional freedoms in new contexts can deepen our understanding of their meaning.”

Two Interrelated First Amendment Claims: “[Petitioner Phillips] argues that he had to use his artistic skills to make an expressive statement, a wedding endorsement in his own voice and of his own creation. As Phillips would see the case, this contention has a significant First Amendment speech component and implicates his deep and sincere religious beliefs. In this context the baker likely found it difficult to find a line where the customers’ rights to goods and services became a demand for him to exercise the right of his own personal expression for their message, a message he could not express in a way consistent with his religious beliefs.”

“Since the State itself did not allow those marriages to be performed in Colorado, there is some force to the argument that the baker was not unreasonable in deeming it lawful to decline to take an action that he understood to be an expression of support for their validity when that expression was contrary to his sincerely held religious beliefs, at least insofar as his refusal was limited to refusing to create and express a message in support of gay marriage, even one planned to take place in another State.”

Viewpoint Discrimination: “[T]he Commission’s treatment of Phillips’ case violated the State’s duty under the First Amendment not to base laws or regulations on hostility to a religion or religious viewpoint.” [emphasis added]

KAGAN CONCURRENCE (Joined by Breyer): #2 — No Expressive Conduct in this Case

No Expressive Conduct: “The cake requested was not a special “cake celebrating same-sex marriage.” It was simply a wedding cake—one that (like other standard wedding cakes) is suitable for use at same-sex and opposite-sex weddings alike. See ante, at 4 (majority opinion) (recounting that Phillips did not so much as discuss the cake’s design before he refused to make it). And contrary to JUSTICE GORSUCH’S view, a wedding cake does not become something different whenever a vendor like Phillips invests its sale to particular customers with ‘religious significance.' ”

“A vendor can choose the products he sells, but not the customers he serves—no matter the reason. Phillips sells wedding cakes. As to that product, he unlawfully discriminates: He sells it to opposite-sex but not to same-sex couples. . . .” [emphasis added]

Expression Without Words: “To suggest that cakes with words convey a message but cakes without words do not—all in order to excuse the bakers in Mr. Jack’s case while penalizing Mr. Phillips—is irrational. Not even the Commission or court of appeals purported to rely on that distinction.”

“Like ‘an emblem or flag,’ a cake for a same-sex wedding is a symbol that serves as “a short cut from mind to mind,” signifying approval of a specific ‘system, idea, [or] institution.'”

Compelled Expression: “Nor would it be proper for this or any court to suggest that a person must be forced to write words rather than create a symbol before his religious faith is implicated.”

Though Chief Justice John Roberts’ First Amendment free speech voting record is very speech protectiive, in this case he elected not to join the Gorsuch concurrence. Why?

Expressive Conduct: “The conduct that the Colorado Court of Appeals ascribed to Phillips—creating and designing custom wedding cakes—is expressive. Phillips considers himself an artist. The logo for Masterpiece Cakeshop is an artist’s paint palate with a paintbrush and baker’s whisk. Behind the counter Phillips has a picture that depicts him as an artist painting on a canvas. Phillips takes exceptional care with each cake that he creates—sketching the design out on paper, choosing the color scheme, creating the frosting and decorations, baking and sculpting the cake, decorating it, and delivering it to the wedding. . . . To [Mr. Phillips], a wedding cake inherently communicates that ‘a wedding has oc­curred, a marriage has begun, and the couple should be celebrated.’ Wedding cakes do, in fact, communicate this message. . . . Accordingly, Phillips’ creation of custom wedding cakes is expressive. The use of his artistic talents to create a well-recognized symbol that celebrates the beginning of a marriage clearly communicates a message—certainly more so than nude dancing, Barnes v. Glen Theatre, Inc., or flying a plain red flag, Stromberg v. California . . .” [emphasis added]

No Evidence of Communicating a Message Required: “The dissent faults Phillips for not ‘submitting . . . evidence’ that wedding cakes communicate a message. Post, at 2, n. 1 (opinion of GINSBURG, J.). But this requirement finds no support in our prece­dents. This Court did not insist that the parties submit evidence detailing the expressive nature of parades, flags, or nude dancing.”

Compelled Affirmation Prohibited: “Forcing Phillips to make custom wedding cakes for same-sex marriages re­ quires him to, at the very least, acknowledge that same- sex weddings are “weddings” and suggest that they should be celebrated—the precise message he believes his faith forbids. The First Amendment prohibits Colorado from requiring Phillips to “bear witness to [these] fact[s],”Hurley, 515 U. S., at 574, or to “affir[m] . . . a belief with which [he] disagrees,” id., at 573.”

Obergefell no Bar to Free Expression Claim: [T]he fact that this Court has now decided Obergefell v. Hodges, 576 U. S. ___ (2015), [does not] somehow diminish Phillips’ right to free speech. “It is one thing . . . to con­clude that the Constitution protects a right to same-sex marriage; it is something else to portray everyone who does not share [that view] as bigoted” and unentitled to express a different view. Id., at ___ (ROBERTS, C. J., dis­senting). This Court is not an authority on matters of conscience, and its decisions can (and often should) be criticized. The First Amendment gives individ­uals the right to disagree about the correctness of Obergefell and the morality of same-sex marriage. Obergefell itself emphasized that the traditional understanding of marriage ‘long has been held—and continues to be held— in good faith by reasonable and sincere people here and throughout the world.’ (majority opinion). If Phillips’ continued adherence to that under­ standing makes him a minority after Obergefell, that is all the more reason to insist that his speech be protected.”

Limiting Reach of Obergefell: “In Obergefell, I warned that the Court’s decision would ‘inevitabl[y] . . . come into conflict” with religious liberty, “as individuals . . . are confronted with demands to partic­ipate in and endorse civil marriages between same-sex couples.’ 576 U. S., at ___ (dissenting opinion). This case proves that the conflict has already emerged. Because the Court’s decision vindicates Phillips’ right to free exercise, it seems that religious liberty has lived to fight another day. But, in future cases, the free­dom of speech could be essential to preventing Obergefell from being used to “stamp out every vestige of dissent” and “vilify Americans who are unwilling to assent to the new orthodoxy.” Id., at ___ (ALITO, J., dissenting).” [emphasis added]

It is notewortthy that only Justice Gorsuch was willing to sign onto the Thomas opinion. Though Justice Alito’s supportive langauage was quoted, he declined to sign onto this opinion.  Same with the Chief Justice who in the course of oral arguments in the case stated: “when the Court upheld same-sex marriage in Obergefell, it went out of its way to talk about the decent and honorable people who may have opposing views.” Even so, he remained silent on this issue.

“Phillips submitted no evidence showing that an objective observer understands a wedding cake to convey a message, much less that the observer understands the message to be the baker’s, rather than the marrying couple’s. Indeed, some in the wedding industry could not explain what message, or whose, a wedding cake conveys. . . . And Phillips points to no case in which this Court has suggested the provision of a baked good might be expressive conduct.”

Note that the Court’s other two liberals (Justices Kagan and Breyer) did not join Ginsburg’s dissent. Why?