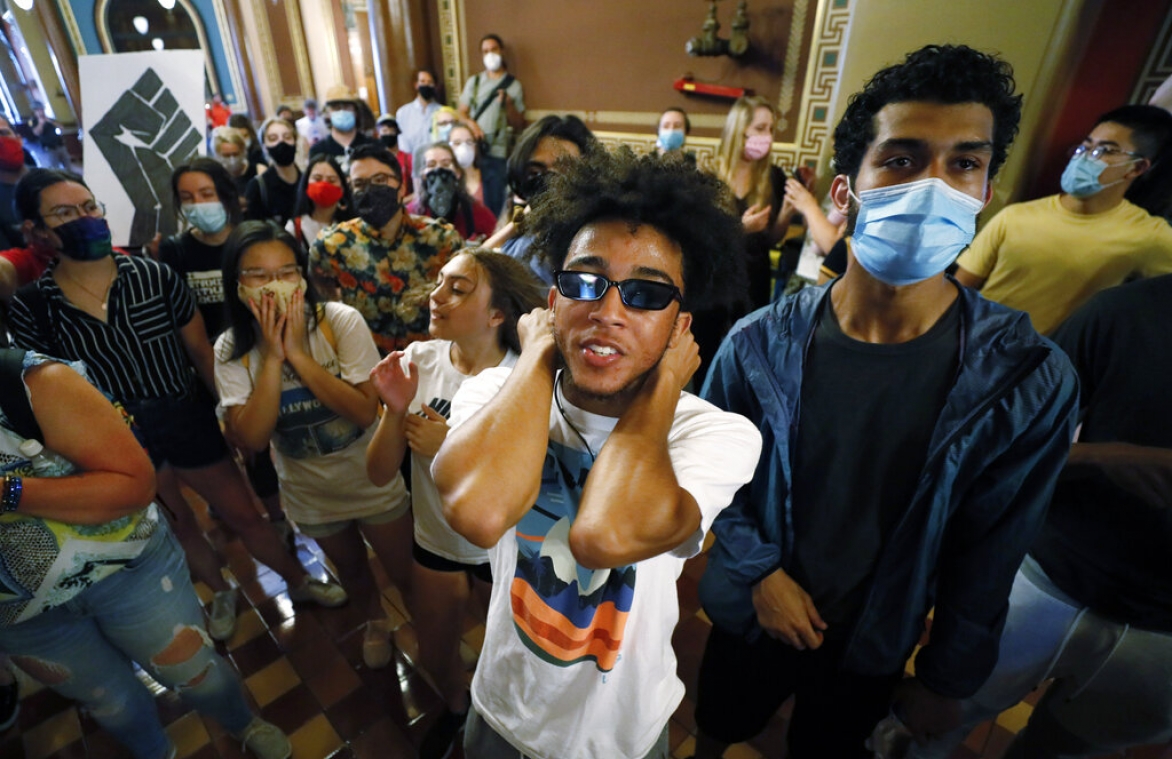 IOWA CITY, Iowa (AP) — An Iowa journalist faces trial Monday, March 8, on charges stemming from her coverage of a protest against racial injustice, a case that prosecutors have pursued despite international condemnation from free press advocates who say she was just doing her job.

The case of Des Moines Register reporter Andrea Sahouri, who was pepper sprayed and arrested while reporting on a clash between protesters and police, will highlight an aggressive response by Iowa authorities against those who organized and attended protests that erupted last summer and occasionally turned violent.

Sahouri and her former boyfriend are charged with failure to disperse and interference with official acts, misdemeanors that could bring fines and up to 30 days in jail. They face an estimated two-day trial at Drake University in what the U.S. Press Freedom Tracker says could be the first for a working journalist nationwide since 2018.

Sahouri's newspaper, the Iowa Freedom of Information Council and Amnesty International are among press advocates that have demanded Polk County drop the charges, which they call an abuse of power that violate the Constitution's First Amendment.

"This is outrageous. Reporting at a protest scene as a working member of the media is not a crime. It is a right that must be protected," Amnesty International said.

But Des Moines police and County Attorney John Sarcone's office argue that Sahouri wasn't wearing press credentials and appeared to be an active participant in an unlawful assembly, saying journalists do not have a free pass to ignore dispersal orders.

Sahouri, recently honored by the Iowa Newspaper Association as one of the state's best young reporters, has continued to cover public safety while the charges have loomed.

While 126 journalists were arrested or detained during 2020's unrest, most either weren't charged or had charges dropped, the Press Freedom Tracker says. Fourteen still face charges.

The determination to prosecute Sahouri has baffled observers, who note Iowa's courts have a backlog of felony cases due to the coronavirus pandemic. Critics say authorities seem to be seeking a conviction to justify an officer's decision to use force unnecessarily against a reporter known for building trust with crime victims and underrepresented communities.

"It's like somebody with their hand in the cookie jar: They can't admit that they made a mistake," said Des Moines civil rights attorney Glen Downey, who is not involved in Sahouri's case. "The case is important because of the journalism aspect, but it's also emblematic of how they are treating all the protesters."

Sahouri, 25, was covering a Black Lives Matter protest at Merle Hay mall when tensions escalated between participants and police. Her boyfriend, Spenser Robnett, accompanied her for safety reasons.

Sahouri covered the protest live on Twitter, reporting that officers charged into a shoe store with rifles and shot tear gas to disperse the crowd.
Sahouri said she was running from the gas when Robnett was hit with a projectile and she stopped to check on him. That's when officer Luke Wilson approached, shot pepper spray into her face and restrained her with zip ties, she says.

Sahouri repeatedly identified herself as press but was nonetheless taken to jail. She reported her arrest live from the back of a police van.

Wilson has claimed he was unaware Sahouri was a reporter until he was detaining her. That's when Robnett intervened, saying she worked for the Register and tried to pull her away, according to Wilson, who says he failed to activate his body camera.

Des Moines Register executive editor Carol Hunter said Sahouri's lack of press credentials, which she had left in her car, is a "red herring" because police knew immediately she was a journalist and a press badge isn't required to enjoy constitutional protections. Reporters must be free to witness protests and hold participants and police accountable, Hunter said.

"Freedom of the press rests on newsgathering," she said. "This really is an attack on a fundamental part of being able to bring people the news."

The newspaper is funding Sahouri's defense, which is led by former U.S. Attorney Nick Klinefeldt.

Prosecutors intend to show jurors text messages between Sahouri and protest leader Matè Muhammad from a week after her arrest. Her lawyers say the texts show a reporter's routine contacts with a source, while prosecutors are expected to paint her as an ally.

Muhammad, who has been fighting charges stemming from protests, said he didn't know Sahouri when she was arrested but the two have since developed a professional relationship. He called her "extremely diligent" in vetting information and gathering different perspectives.