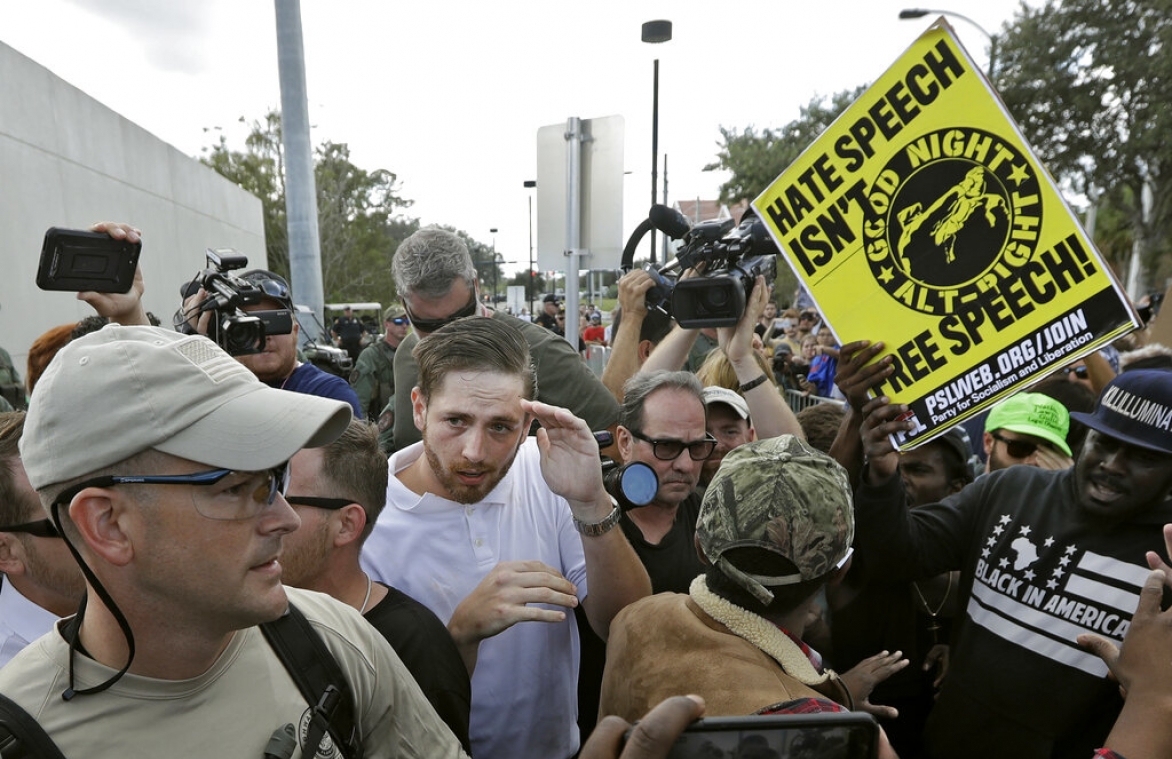 In this Oct. 19, 2017, file photo, a supporter of white nationalist Richard Spencer, center in white shirt, tries to cover up as he clashes with the crowd after a speech by Spencer at the University of Florida in Gainesville. Florida Republicans are spearheading a legislative effort that they argue would protect free speech at the state's public universities. The proposal would prevent universities from "shielding" students from differing perspectives even if the broader campus community finds those views offensive. (AP Photo/Chris O'Meara)

Florida is among about a dozen states debating legislation over free speech on campuses, many of the measures pursued by Republicans concerned about conservative views being drowned out by liberal voices.

The measure would take stock of any bias by requiring colleges and universities to identify the prevailing political views on campuses statewide. The results of the surveys, the bill's advocates said, would give a clearer picture of whether intellectual freedom on those campuses truly exists.

The bill's sponsor suggested that diversity should not be based on physical characteristics but should also encompass what he called "viewpoint diversity." Proponents have suggested that campuses have fostered environments where liberal ideology is allowed to flourish at the expense of conservative views.

"When you value people that look different but think the same, that's not diversity. That's conformity," said Rep. Spencer Roach, who said it was time to ask "whether our institutions are truly a marketplace for the exchange of ideas."

The results of that survey, he said, could be the basis for future policy decisions, although it was unclear what additional measures the findings could spawn.

Roach and other Republicans argue that campuses sometimes are too preoccupied with "shielding" students from differing perspectives, especially those that the broader campus community finds offensive.

In recent years, free speech has become an incendiary issue on campuses across the country, sparking high-profile clashes in which protesters have shut down or heckled conservative speakers, including at the University of California, Berkeley.

In 2017, the University of Florida rejected a request for Richard Spencer, a well-known white supremacist, to speak on its campus because of concerns of violence. The university later reversed its decision after it was sued under the First Amendment, but Spencer's speech was drowned out by protesters.

Critics in Florida are countering that the measure could have unintended and even dangerous consequences, with one Democratic lawmaker raising concerns over clashes between opposing groups.

"The idea is advanced that our colleges and our universities are teaching liberal views," said Rep. Geraldine Thompson, a Democrat and retired college administrator. She suggested that survey findings could be used to later mandate certain curricula. "This survey will give someone a basis to say we need to be focusing on these ideas, these viewpoints more so than others."

More disturbingly, she said, it could prevent college officials from restricting who has access to campuses, saying that groups like the Ku Klux Klan could march through campuses like Florida A&M University, one of the country's historically black colleges and universities.

"How about the responsibility of universities not to invite altercations, not to disrupt the learning environment?" Thompson asked.

"At the end of the day, we are here to help and protect our students," said Rep. Amber Mariano, a Republican who was first elected to the Florida House in 2016 when she was a student attending the University of Central Florida. "There are biases in our classrooms, in our higher education institutions — not in every classroom, not every professor, and not every student experiences these biases, but they are there."

The Senate version is expected to receive a vote by the full chamber soon.