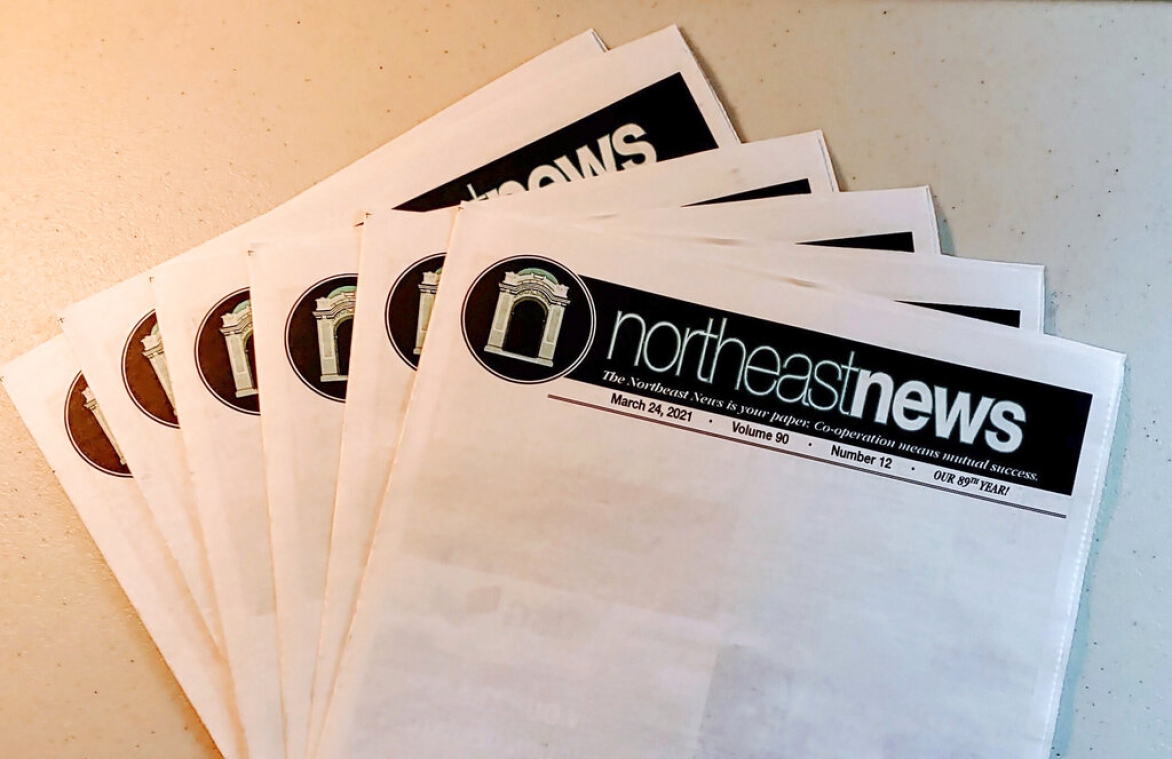 Copies of the March 24, 2021, edition of Northeast News, featuring a blank front page appear in Kansas City, Mo., on March 26, 2021. The newspaper chose to leave the front page of its March 24 issue blank to show community members what they'd miss if the newspaper folded. (Northeast News via AP)

NEW YORK (AP) — Stories are back on the cover of Kansas City's Northeast News this week after the newspaper intentionally printed a blank front page of its previous edition to show community members what they'd miss if the newspaper folded.

On last week's cover of the newspaper, distributed each Wednesday in one of the Missouri city's grittier neighborhoods, residents were told about the local ironworkers who repaired a fence at a historic cemetery for free.

In the past week, the 89-year-old newspaper has received more than $3,000 in pledged donations, including one from Florida after the blank front page received national attention. A handful of new advertisers have emerged, along with other ideas to keep the Northeast News afloat, said Michael Bushnell, publisher and co-owner.

"We never expected this to blow up like it did," Bushnell said. "In the end, thank God it did."

The idea for the blank page was cooked up in a staff meeting, coupled with a decision not to post any news online or answer office phones for 24 hours.

Bushnell was personally inundated with texts and calls when the paper was distributed last week: "Are you aware there's nothing on the front page?" "Your printer might have made a mistake." He directed friends to open the paper, where managing editor Abby Hoover's column explained why it was done.

Because of the pandemic, two local laundromats, a grocery store and charter school had stopped advertising, making $2,700 in monthly revenue vanish.

Without any changes, the paper had about a 60-day lifespan, she wrote.

If it goes, there's nothing to replace it. The big-city Kansas City Star has a bigger area to follow and its own economic worries, and Northeast News staffers usually only see Star reporters on the scene of a murder or bad accident.

No one else takes the day-to-day pulse of the neighborhood, Hoover said in an interview.

"People kind of take for granted what community news does," she said. "We host forums with candidates, sponsor community clean-ups. There's so much more than showing up, taking notes and going home."

Dan Smith, owner of the Eleos Coffee House in northeast Kansas City, was one of the people who texted Bushnell.

Northeast News is distributed in Eleos. Smith is an advertiser despite his own tough times; Eleos closed for two months due to COVID-19. He said he appreciates the support the newspaper gives to local businesses and its staff members' personal dedication to the neighborhood.

"It really is part of the glue of the community," Smith said. "If you take that out, I think we would all feel a little more like individual islands."

Northeast News is hardly alone. About a quarter of the nation's newspapers ceased operations over a 15-year period, the vast majority community weeklies, said Penelope Muse Abernathy, a Northwestern University journalism professor  who tracks the industry.

A survey taken last October found more than 60 newspaper shut-downs tied to the pandemic, and Abernathy said she has since learned of more than a dozen more. If the 2008 recession is any guide, newspapers will face some of their toughest problems in the next two or three years when immediate government relief wears out, she said.

Abernathy admires the Northeast News' visual plea. "It's a nice, sophisticated way to remind people what's at stake," she said.

Bushnell is trying all sorts of things to keep operating.

After one banker told him Northeast News wouldn't get any more than its initial $12,000 COVID relief payment from the government, he's found a more aggressive, and optimistic, banker. He's received a $5,000 journalism grant from Google and another low-cost loan from the government. He's exploring going non-profit. While Northeast News doesn't charge for subscriptions or have a paywall on its website, he's looking at ways to give benefits to people who voluntarily pay for a subscription.

And, late March 31, Bushnell learned that the El Mercado Fresco grocery store — which had pulled advertising late last year — is coming back.