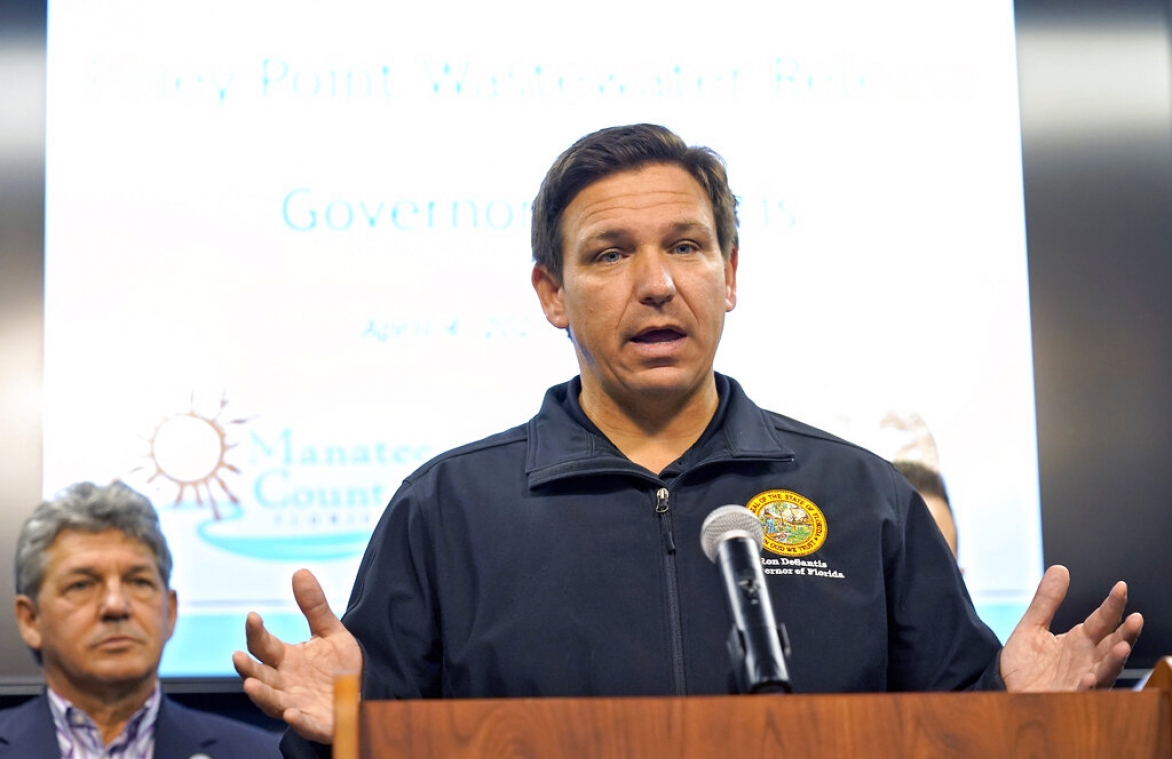 FORT LAUDERDALE, Fla. (AP) — Florida Gov. Ron DeSantis attacked YouTube and its parent company Google on April 12, accusing the tech giant of censorship for its decision last week to remove from its platform video of a coronavirus discussion he organized where his panel criticized lockdowns and some mask wearing as ineffective.

DeSantis said YouTube's contention that video of the March 18 panel violates its ban on the posting of disinformation is an attempt to stifle dissent against the federal government's pandemic response. That discussion included Dr. Scott Atlas, a radiologist who was a coronavirus adviser to former President Donald Trump, and other physicians who support DeSantis' decision to open Florida's economy with few restrictions.

The attack is part of a bigger war DeSantis and other Republicans are waging against social media giants, including Facebook and Twitter, contending they discriminate against conservatives.

"Google/YouTube has not been throughout this pandemic repositories of truth and scientific inquiry, but have instead acted (as) enforcers of a narrative, a big tech council of censors in service of the ruling elite," DeSantis said during a Tallahassee press conference with Atlas and other doctors who were on his earlier panel.

YouTube says it took down the DeSantis panel video because some participants said children should not wear masks because they are ineffective at that age and a possible health hazard. YouTube said that contradicts U.S. government guidelines that say children 2 and older should wear masks in public and when around people they don't live with.

"YouTube has clear policies around COVID-19 medical misinformation to support the health and safety of our users," the company said in a statement Monday. "We removed this video because it included content that contradicts the consensus of local and global health authorities regarding the efficacy of masks to prevent the spread of COVID-19."

DeSantis wants the Florida Legislature to pass a bill that could make it harder for the companies to remove users they say violate their rules. Critics contend the proposal would have little impact as the companies transcend the state's borders and would be challenged as violating the companies' First Amendment rights.

Atlas compared YouTube's decision removing the video to the Soviet Union and China, where communist governments banned opinions the rulers disagreed with.

"There is nothing more dangerous than being able to censor what is said in a country because you are never even going to hear the truth," Atlas said.

YouTube and its supporters counter that it is a private business and not a government body and is under no obligation to host information it feels violate its rules and standards. The company said Monday it doesn't discriminate.

"Our policies apply to everyone, and focus on content regardless of the speaker," it said.

Criticism of the governor's statements came quickly from Agriculture Commissioner Nikki Fried, a Democrat and potential challenger next year. In a statement, she called his comments "unhinged, dangerous rhetoric."

"Over the course of a year in which 2 million Floridians have been sickened, 34,000 have died, and 1 million have lost jobs, this Governor has blamed everyone including the media, Hispanic farmworkers, China, and 'Big Tech,' while taking no responsibility for hiding data, silencing critics, and lying to Floridians," she said.

DeSantis has long faced criticism from Fried and other Democrats for his handling of the pandemic, saying he allowed the state to be too open too quickly. One recent example was spring break, where tens of thousands of college students from around the country and globe crowded into Miami Beach with few masks and no social distancing. The city imposed a curfew to curtail the crowds.

DeSantis contends Florida has fared better medically than many states with stronger restrictions.

Florida, overall, is near the middle of states in COVID-19 deaths per capita, with a rate of 159 per 100,000 since the pandemic began 13 months ago. Some states that had tougher lockdowns like New York and New Jersey have much higher rates of about 260 per 100,000 — but were also hit harder early in the pandemic before restrictions could take affect and before medical treatments for the disease were improved.
California, which DeSantis also likes to cite as a lockdown failure, has a slightly lower death rate of 153 per 100,000.

Over the past week, Florida's daily death rate per capita has been lower than those three states.

DeSantis on April 12 also touted the state's vaccination efforts. According to the Florida health officials, 7.2 million residents have received at least one dose, about 40% of adults. About 4.4 million are fully vaccinated. That's 25% of adults.

But black residents remain grossly underrepresented — while 17% of Floridians are black, only about 6.5% of those who have received at least one shot have identified as black. That number is likely somewhat low as 1 in 7 people vaccinated have declined to identify their race.