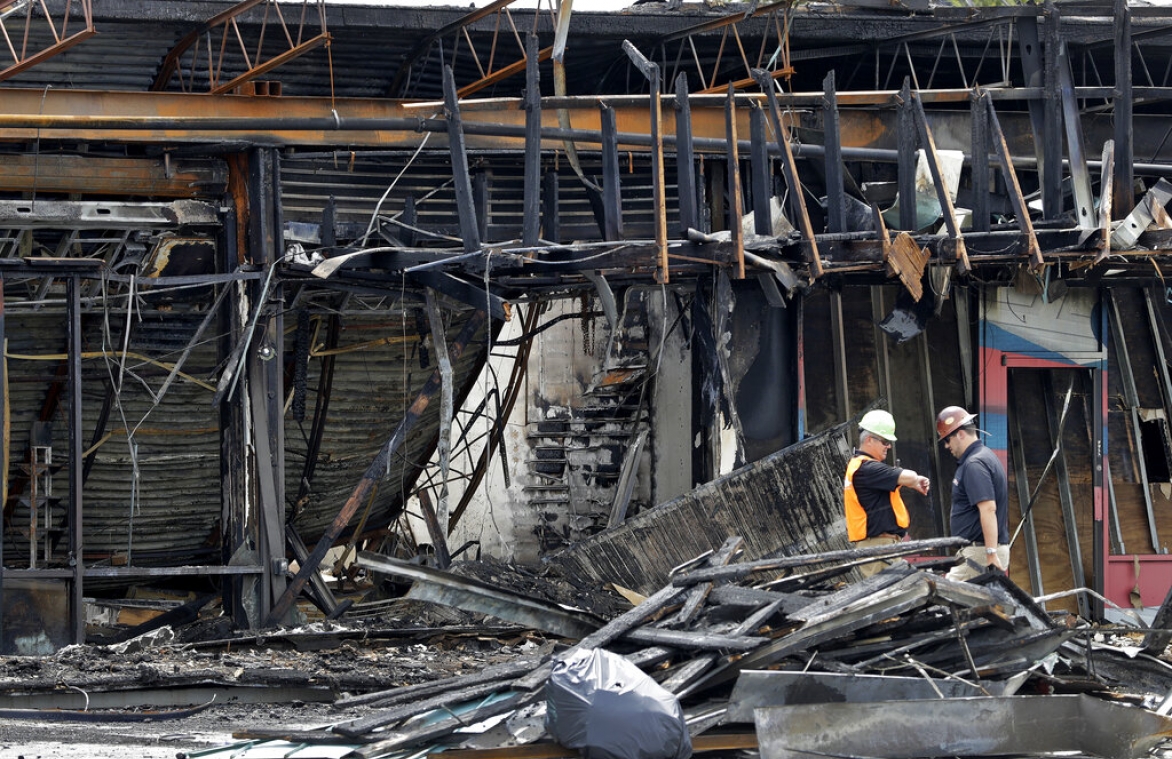 Two workers inspect damage to a sporting-goods store June 1, 2020, in Tampa, Fla., after the establishment was looted and burned by protesters during a riot. Several counties across Florida issued curfews to curb large crowds gathering to protest the killings of black people by police. (AP Photo/Chris O'Meara)

TALLAHASSEE, Fla. (AP) — Florida's Republican-controlled Legislature approved stiffer penalties against violent protesters on April 15, handing a major legislative victory to Gov. Ron DeSantis, who began campaigning for the measure last year after a summer of turmoil across the country over the killings of Black people by police.

A divided Florida Senate approved an anti-riot bill as the trial of a Minneapolis police officer, Derek Chauvin, was underway for the death of George Floyd, a black man whose death under Chauvin's knee triggered waves of protests.

The measure was sent to Florida's Republican governor as new protests erupted this week in a Minneapolis suburb after another fatal police shooting of a black man.

During weeks of debate, the spirits of the civil rights movement — and the specter of racism — wafted through hearing rooms, as bill opponents invoked the names of civil rights icons, including the Rev. Martin Luther King Jr.

"Can I tell you that this bill is not about racism? Not entirely, I can't know," said GOP Sen. Ed Hooper, who joined the Republican majority in advancing the bill to the governor. "But I do believe in my heart that, at the end of the day, we are a nation and a country of law and order."

When lawmakers introduced the bill earlier this year, some supporters cast it as a response to the Jan. 6 insurrection at the U.S. Capitol by supporters, mostly white, of former President Donald Trump.

But critics debunked that narrative and instead called the legislation an assault against the Black Lives Matter movement, as well as an attempt to curtail the right to free speech and to peaceably assemble.

The genesis of the measure dates to a Sept. 21 press conference held by the governor in which he was joined by Senate President Wilton Simpson and House Speaker Chris Sprowls to condemn the tumults in cities across the country and what he referred to as attacks on law enforcement.

After the bill's final passage, DeSantis said he looked forward to signing the measure into law.

"This legislation strikes the appropriate balance of safeguarding every Floridian's constitutional right to peacefully assemble, while ensuring that those who hide behind peaceful protest to cause violence in our communities will be punished," the governor said in a statement.

The measure drew intense passions over the months, as community activists from across the state gathered in the state Capitol to implore lawmakers to turn down the effort.

From the start, the legislation appeared cleared for passage by Republican leaders. What came before the state Senate for final approval on April 15 was the same measure already approved by the House, which cleared the way for the measure to head to the governor's desk. It would become law immediately upon signing.

When the bill is signed into law, penalties would be enhanced for crimes committed during a riot or violent protest. It would allow authorities to hold arrested protesters until a first court appearance. And it would establish new felonies for organizing or participating in a violent demonstration.

The proposal would also make it a second-degree felony to destroy or demolish a memorial, plaque, flag, painting, structure or other object that commemorates historical people or events. That would be punishable by up to 10 years in prison.

"Rights have limits, and violence is where the line is drawn," said Republican Sen. Danny Burgess, who carried the bill in the Senate. "This bill is about preventing violence."

But some community organizers saw it differently, saying it was designed to muzzle dissent.

Christina Kittle, an organizer of the Jacksonville Community Action Committee, warned that the new law could escalate clashes between police and demonstrators.

"It's been a blow to our morale, for sure," she said. "I'm not sure it's going to be a setback, but this was created to intimidate people and to keep people from coming out."

The American Civil Liberties Union said the new law would give police broad discretion over what constitutes a demonstration and a riot.

"The bill was purposely designed to embolden the disparate police treatment we have seen over and over again directed towards Black and brown people who are exercising their constitutional right to protest," said Micah Kubic, the executive director of ACLU of Florida.

Sen. Darryl Rouson, a former St. Petersburg chapter president of the NAACP who joined every Democrat and a lone Republican in voting against the bill, said the new law wouldn't deter anyone from protesting a just cause.

"This is not going to stop people from rising up," Rouson said. "This won't stop anything, except those who are afraid. I'm not afraid," he said. "I just want to say to people, keep on knocking, keep on protesting, keep on rising in spite of an attempt to stifle voices."