Assistant football coach fired over tweet sues to get job back 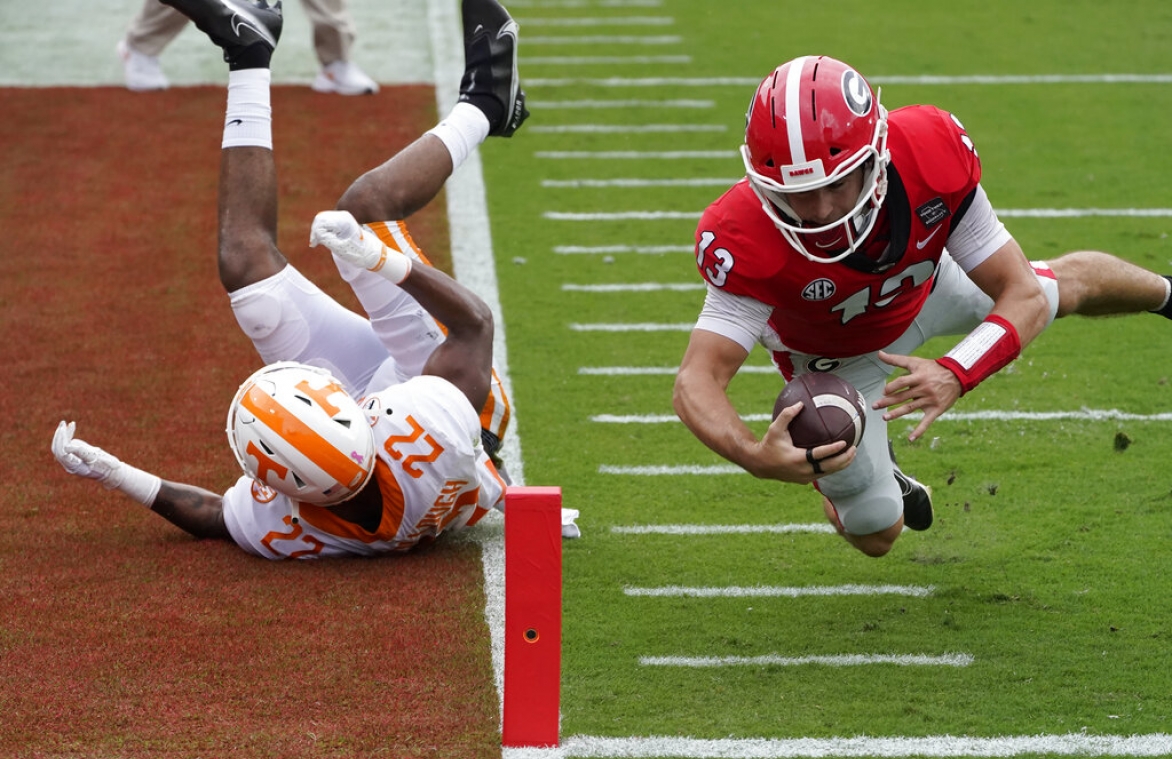 Georgia quarterback Stetson Bennett (13) dives past Tennessee defensive back Jaylen McCollough (22) to score a touchdown in the first half of an NCAA college football game Saturday, Oct. 10, 2020, in Athens, Ga. (AP Photo/John Bazemore)

A Chattanooga football assistant coach fired over a social media post disparaging the state of Georgia and voting-rights advocate Stacey Abrams is suing to get his job back along with back pay and damages. He contends his First Amendment rights were violated.

Chris Malone says he was forced to resign Jan. 7 in the lawsuit filed April 27 in the Eastern District of U.S. District Court. Malone is suing Chancellor Steven Angle, athletic director Mark Wharton and coach Rusty Wright individually and in their roles at the University of Tennessee-Chattanooga.

"In most states, employers are allowed to be controlling and vindictive when it comes to social media," Malone's attorney, Doug Churdar, said Thursday. "It's different for government or public employers. They cannot ignore the First Amendment."

Chattanooga declined to comment April 29 because of the pending litigation.

The lawsuit argues Malone made the social media post on his own time on his own Twitter account as a private citizen and did not need permission or approval. Malone has coached approximately 20 years at UMass, VMI, James Madison, Old Dominion, Virginia State and Chattanooga.

In a tweet caught by screen grabs, Malone posted on the night of Jan. 5: "Congratulations to the state GA and Fat Albert @staceyabrams because you have truly shown America the true works of cheating in an election, again!!! Enjoy the buffet Big Girl!! You earned it!!! Hope the money is good, still not governor!"

Malone deleted the tweet about 30 minutes later after three former players responded negatively, according to the lawsuit. The assistant coach's Twitter account was deleted the night of Jan. 6.

The lawsuit alleges Malone heard nothing about the post from Wright until the coach called him late on the afternoon of Jan. 6. Malone says Wright told him later the matter had gone "over his head" before calling him on the morning of Jan. 7 to email his resignation.

Chattanooga announced later that day that Malone had been fired. Wharton said in a statement the post was brought to his attention the night before. Wharton did not refer to Malone by name but called the social media post "totally inappropriate" and "appalling." Wright said the post violated the program's standards.

Only the head football coach and head men's and women's basketball coaches under contract at Chattanooga. Tennessee is a right-to-hire state, meaning anyone can be fired at any moment for any reason.