World Press Freedom Day: Pakistani journalists' group 'will not surrender this cause' 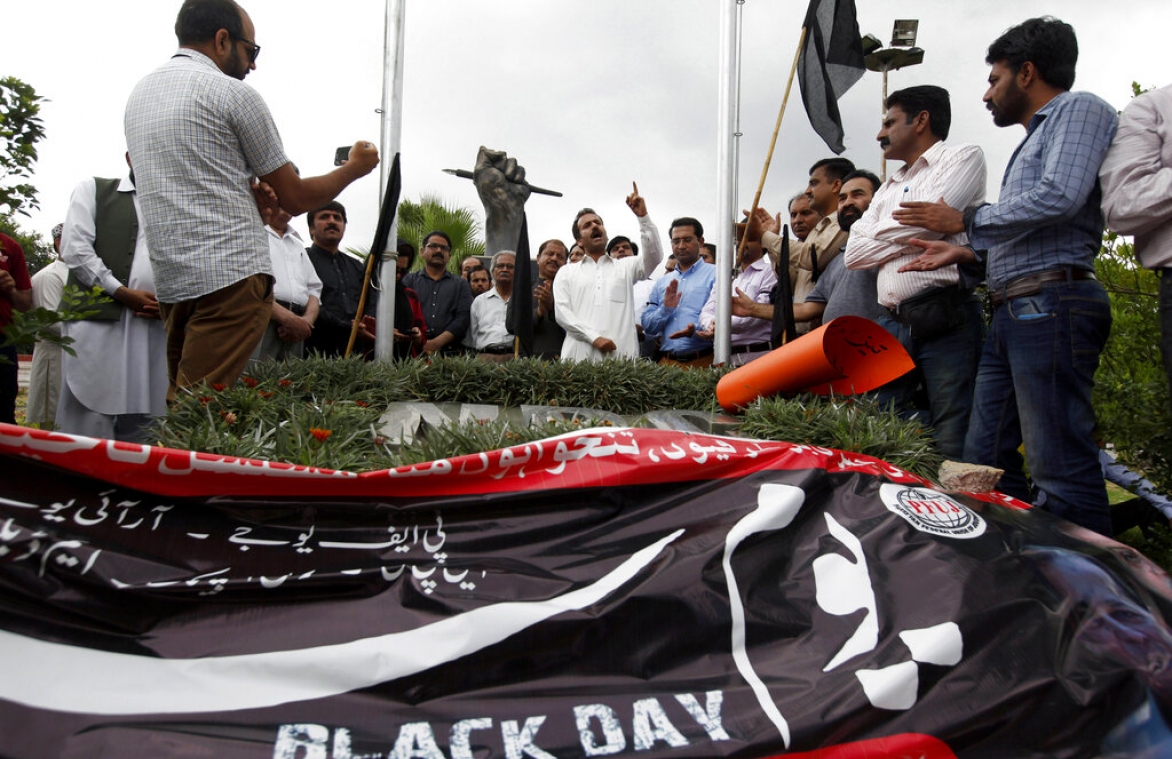 In this July 16, 2019, file photo, Members of Pakistan Federal Union of Journalists take part in a demonstration to denounce rampant censorship, in Islamabad, Pakistan. A committee of journalists in Pakistan said on May 3, 2021, that the news media increasingly faces censorship, attacks and harassment. The Pakistan Federal Union of Journalists vowed to keep up the struggle for press freedom in a country that's long been a deadly place for journalists. (AP Photo/Anjum Naveed)

ISLAMABAD (AP) — The news media is facing growing censorship, attacks and harassment in Pakistan that are threatening freedom of the press, a committee of journalists said today, May 3, World Press Freedom Day.

The government said there are no curbs on journalists in the country.

But Pakistan has long been a dangerous place for journalists. There were 148 documented attacks or violations against journalists in Pakistan from May 2020 to April 2021 — an increase over previous years, according to The Dawn, the country's English-language newspaper. It said these incidents included six murders, seven attempted assassinations, five kidnappings, 25 arrests or detentions of journalists, 15 assaults and 27 legal cases registered against journalists.

In an editorial marking World Press Freedom Day, the newspaper said the space for journalists in Pakistan was shrinking, and "a media in chains cannot hold the powerful to account and serve public interest as it is meant to do".

Pakistan has long been a deadly place for journalists. In 2020, it ranked ninth on the Committee to Protect Journalists' annual Global Impunity Index, which assesses countries where journalists are murdered regularly and their killers go free. According to the CPJ, Bangladesh, Russia and India are ahead of Pakistan. Although the Pakistan government says it supports freedom of speech, rights activists often accuse Pakistan's military and its agencies of harassing and attacking journalists.

On May 3, President of Pakistan Federal Union of Journalists Shahzada Zulfiqar and Secretary-General Nasir Zaidi said freedom of the press is their hallmark and they "will not surrender this cause at any cost." They said journalists were also facing cuts in pay and thousands had become jobless.

Mazhar Abbas, who often reports for Pakistan's independent Geo Television, told The Associated Press that curbs on media and attacks on journalists increased in recent years. So far, he said, it's not known whether the state has punished those linked to the abduction or harassment of journalists.

He said the country's media-regulatory body issued more than 12,000 notices to media people, newspapers, and news channels. Abbas said media in Pakistan was facing censorship for which the state uses different tactics, including telling media through the media regulatory body what can be reported and what cannot be reported. News channels are taken off air by the regulatory body if press advice is not complied with, he said.

However, Fawad Chaudhry, Pakistan's information minister, said in a statement that Pakistan's government regards the freedom of the press as a "fundamental, democratic and constitutional right."

He did not address the allegations by the leaders of the journalists' association.