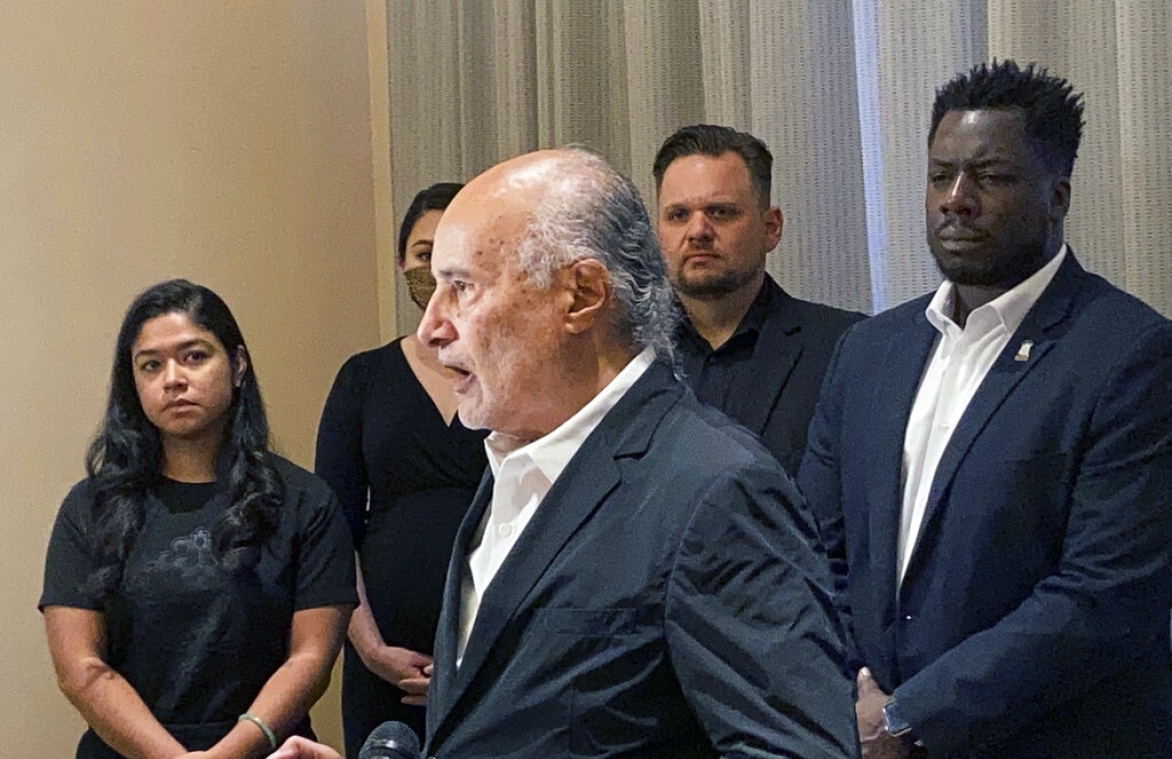 Attorney Billy Murphy speaks at a news conference after filing a lawsuit alleging Phoenix police officers retaliated against 124 citizens protesting nearly a year ago by arresting them on trumped-up charges that were all quickly dismissed in Phoenix, Ariz., May 28, 2021. The woman to the far left is Maxima Guerrero Sanchez, one of the plaintiffs. The rest are attorneys. A city spokesman declined to comment on the lawsuit’s allegations but said the city was committed to protecting constitutionally protected rights of its residents and visitors. (AP Photo/Jacques Billeaud)

PHOENIX (AP) — A lawsuit filed May 28 alleges that Phoenix officers retaliated against 124 people at a protest of police violence nearly a year ago by arresting them on trumped-up criminal charges that were quickly dismissed.

Lawyers who filed the lawsuit said the actions of the officers chilled the free-speech rights of protesters, contending officers were partially motivated "by the desire to silence and disrupt plaintiffs' actual or perceived protected anti-police-violence views."

The lawsuit was filed against the city of Phoenix, Police Chief Jeri Williams and other police officials by 23 people who were arrested during the May 30, 2020, protest in downtown Phoenix.

Demonstrators were protesting George Floyd's death in Minneapolis and Dion Johnson's death in metro Phoenix as officers were trying to arrest them.

The suit seeks unspecified monetary damages and class-action status to cover the other 101 people who were arrested. The demonstrators also were requesting court orders that would bar Phoenix police from using chemical irritants against demonstrations and declare that the protesters in question were officially cleared of the allegations.

City spokesman Dan Wilson refused to comment on the allegations, but said the city was committed to protecting constitutional rights of its residents and visitors. Wilson also said the city has hired a consulting firm to examine police policies related to public demonstrations.

The lawsuit said authorities had cut and pasted identical language when filing court records that described the allegations against each person who was arrested. It said police declared the protest to be unlawful without cause, chased down protesters, shot them with pepper spray, fired at them with rubber bullets and detained them for hours in poorly ventilated police vehicles without access to water or bathrooms.

The 124 cases were thrown out by judges when those arrested made their first court appearance, the lawsuit said.