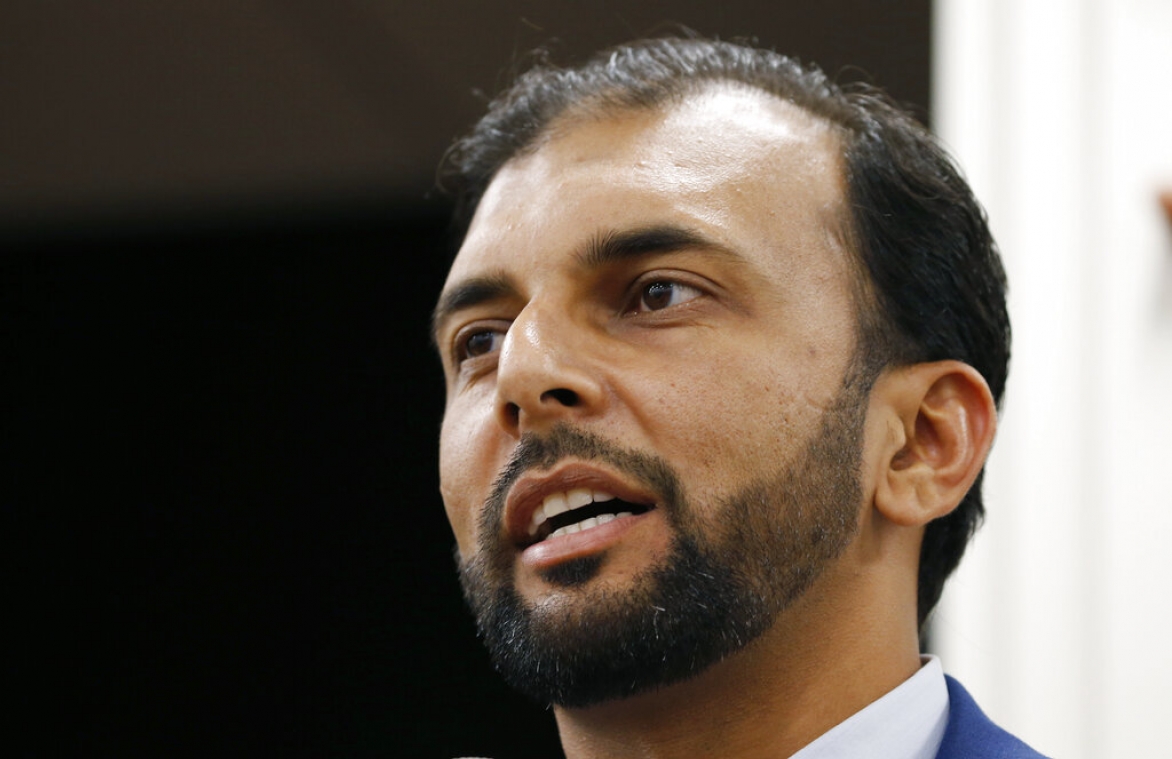 This Oct. 8, 2019, file photo shows Democratic candidate for the 28th district for the Virginia Senate, Qasim Rashid, in Fredericksburg, Va. A federal appeals court on June 4, 2021, upheld the conviction of a North Carolina man who posted an anonymous threat on social media to lynch Qasim Rashid, a Muslim-American political candidate from Virginia. (AP Photo/Steve Helber)

A federal appeals court on June 4 upheld the conviction of a North Carolina man who posted an anonymous threat on social media to lynch an American Muslim political candidate from Virginia.

The March 2018 tweet included a picture of a lynching and read, "VIEW YOUR DESTINY." Rashid posted a screenshot of the threatening tweet and reported it to the FBI.

The panel upheld U.S. District Judge Max Cogburn Jr.'s refusal to dismiss Vandevere's indictment and acquit him without a trial.

Vandevere, 54, of Black Mountain, appealed after a jury in Asheville, N.C., convicted him in December 2019 of interstate communication of a threat to injure a person. Last June, Cogburn sentenced Vandevere to 10 months in prison.

Vandevere is serving his sentence at a low-security prison in Loretto, Pa., that has a minimum-security satellite camp and is scheduled to be released on Oct. 5, according to the federal Bureau of Prisons' website.

"We note first that a reasonable recipient familiar with the context would have felt threatened by the message and would not have construed it as a joke," the panel's opinion says.

The judges also noted that Vandevere specifically directed the tweet at a single person, albeit in a public forum, and wasn't communicated "in a manner to engage anyone in public discourse regarding his political beliefs."

"Finally, viewing the tweet in the context in which it was received, Vandevere's statement would indicate to a reasonable recipient that Vandevere had a serious intent to do harm," the panel added.

The judges ruled without holding a hearing for Vandevere's appeal, saying it wouldn't have helped them decide the case.

Rashid, a Democrat, lost his November 2019 bid to defeat an incumbent Republican state senator in Virginia. Prosecutors have said Rashid's political campaign started well after the threat was made "and had no bearing on the threat."

Authorities also accused Vandevere of posting an anti-Semitic threat on a Florida synagogue's Facebook page. A rabbi at Ramat Shalom Synagogue contacted the FBI after somebody using the name Bob Smith posted a "disturbing" comment in response to the rabbi's post showing support for the Parkland, Fla., high school where a gunman killed 17 people earlier that month, the agent wrote.

Investigators linked Vandevere's telephone number to the same Twitter account — with the handle "DaDUTCHMAN5" — that posted the threat against Rashid. The post was accompanied by a black-and-white photograph of the infamous 1915 lynching of a Jewish man, Leo Frank, in Marietta, Ga.