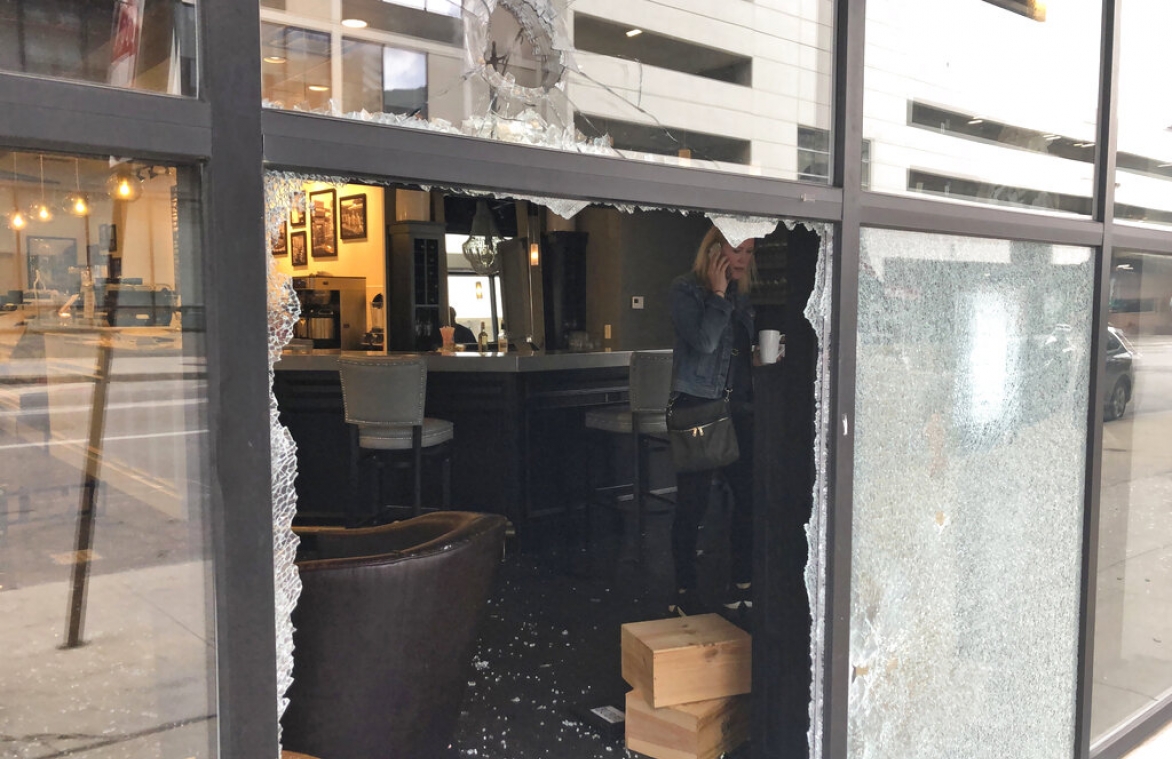 Monica Thomas, franchise owner of Winan's Chocolates + Coffees + Wine, talks on the phone inside her smashed-up shop on May 29, 2020, in Columbus, Ohio. The damage occurred as protesters angry over the death of George Floyd in Minneapolis police custody turned out for a demonstration in Columbus that began peacefully but turned violent, with windows smashed at the Ohio Statehouse and storefronts along surrounding downtown streets. (AP Photo/Andrew Welsh-Huggins)

Special prosecutor Kathleen Gerber and independent investigator Rick Wozniak announced the first charges against two officers and a sergeant with the Columbus Division of Police in an ongoing investigation into the division's handling of days of intense protests that engulfed the city last May and June.

The misdemeanor charges follow a federal judge's ruling in April that the division mishandled the protests and used force against protesters without provocation.

The special prosecutors were hired by the city to conduct the investigation.

"I was asked by the City of Columbus to independently evaluate the allegations of police misconduct from last summer's protests so that both citizens and police officers are held to the same standard of accountability," Garber said in a statement. "We appreciate the community's patience over the past year while we have made continued attempts to interview witnessing officers and identify officers committing the alleged misconduct during the protests."

Columbus Public Safety Director Ned Pettus welcomed the investigation and its results, saying "this is important, necessary work." He added: "Answers and accountability are what the people of Columbus demand, and deserve."

District Court Judge Algenon Marbley granted a preliminary injunction April 30 against the city's police force, barring officers from using tear gas, pepper spray, wooden bullets and other "nonlethal force," against nonviolent protests. Marbley said most participants of last summer's protests were peacefully protesting or observing when some officers used such nonlethal responses. There is "a mountain of evidence" that protesters were targeted while trying to follow police orders to leave the demonstrations, he wrote.

"This case is the sad tale of police officers, clothed with the awesome power of the state, run amok," Marbley wrote in his decision.
The ruling was in favor of 26 protesters who filed a class-action lawsuit in July against the division, claiming they were brutalized by officers during the demonstrations last year.

The city attorney's office said it has also prosecuted nearly 100 civilians for "violent, aggressive behavior" during the protests, including for threatening behavior toward police.

The investigation by the special prosecutors into other allegations of Columbus police misconduct during the protests remains open.

Also in April, a $250,000 review commissioned by the Columbus City Council found that the city was unprepared for the size and energy of the protests and that most police officers felt abandoned by city leadership during that time. The report found the city had no advance plan for handling such protests, and suffered from a lack of coordination and even regular communication among city leaders once the protests began.

The division has been under immense pressure not only for its handling of last year's protests but for a number of high-profile, fatal shootings of black men and children since December.

Mayor Andrew Ginther requested in April that the Department of Justice review the division, capping several painful months for the city, culminating most recently with the April 20 fatal shooting of 16-year-old Ma'Khia Bryant as she swung a knife at a woman. Bryant was black and the rookie officer who shot her was white.