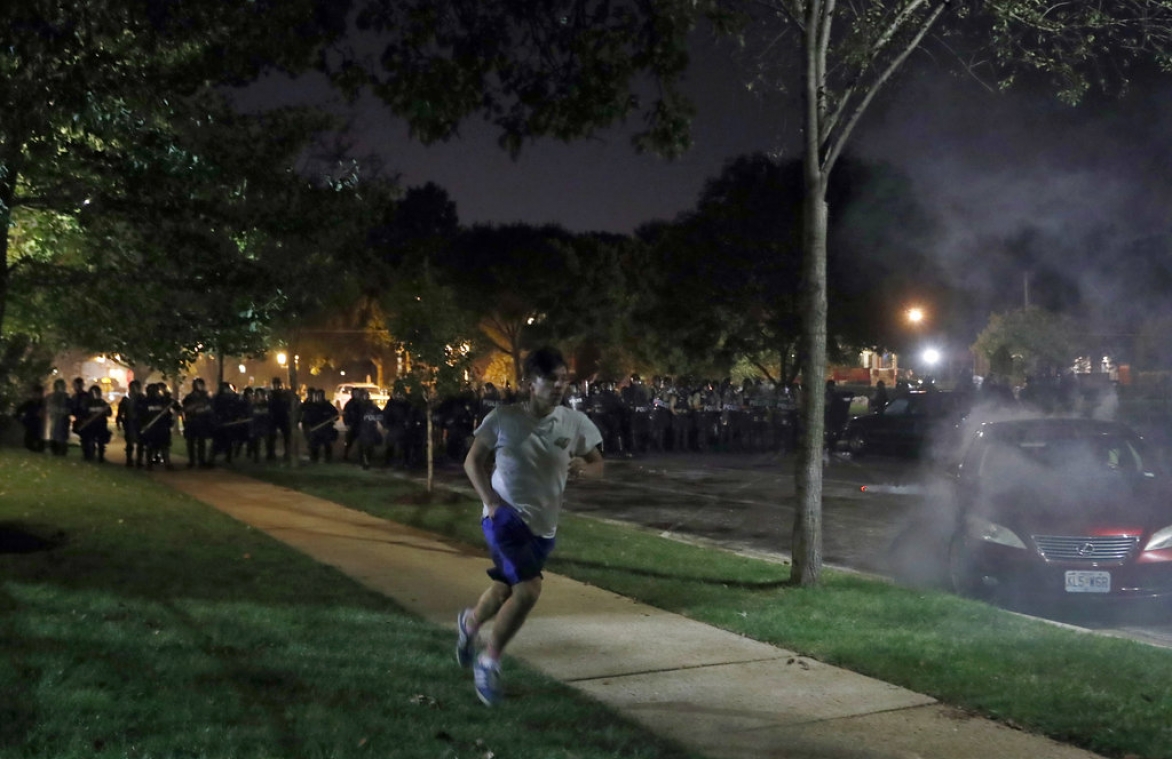 In this Sept. 15, 2017, file photo, a protester runs from the police in St. Louis, as demonstrators rally around the home of St. Louis Mayor Lyda Krewson, after a judge found Jason Stockley, a white former St. Louis police officer, not guilty of first-degree murder in the death of Anthony Lamar Smith, a black man, who was fatally shot after a high-speed chase in 2011. (AP Photo/Jeff Roberson)

A police officer who used force and arrested a now-deceased documentary filmmaker during a protest is not entitled to qualified immunity, a federal appeals court has ruled. The ruling allows excessive force and First Amendment retaliation claims to proceed against the officer.

On Sept. 17, 2017, Drew and Jennifer Burbridge covered protests in downtown St. Louis that occurred after a police officer’s acquittal in the death of Anthony Lamar Smith. The Burbridges, husband and wife, acting in their role as documentary filmmakers, were video recording the protests when a dispersal order was issued.

The Burbridges said they did not hear the dispersal order and police officers arrested Drew Burbridge, pepper sprayed him twice, and allegedly struck him several times. After their criminal charges were dismissed, the Burbridges sued several St. Louis police officers, including Officer Marcus Biggins, for excessive force under the Fourth Amendment and for retaliation under the First Amendment.

Biggins filed a motion to dismiss based on qualified immunity, a doctrine that insulates government officials from liability when they do not violate clearly established constitutional-law principles. Biggins contended that he did not use excessive force and that if the excessive force claim failed, then the First Amendment retaliation claim must fail also. A federal district court denied Biggins qualified immunity.

On appeal, a three-judge panel of the 8th U.S. Circuit Court of Appeals agreed. Sadly, Drew Burbridge died after an accident during the period of the appeal, and Jennifer Burbridge, as personal representative of his estate, filed a motion to be substituted as the party plaintiff.

The 8th Circuit reasoned that Biggins was not entitled to qualified immunity because a reasonable factfinder could determine that he had used excessive force. A First Amendment retaliation claim requires that a plaintiff show that (1) he engaged in First Amendment-protected activity, and (2) that a government official took adverse action against him that would chill a person’s First Amendments rights.

Biggins also argued that because he did not use excessive force, he took no adverse action against Burbridge and the First Amendment retaliation claim must fail.

But the 8th Circuit panel held June 25 in Burbridge v. City of St. Louis that a reasonable jury could find that Biggins used an unreasonable amount of force.

The panel also wrote that “a reasonable jury could conclude that Officer Biggins’s use of excessive force was done in retaliation for Drew’s First Amendment activity.” Thus, the panel concluded that the district court’s denial of qualified immunity was proper and the lawsuit could proceed.