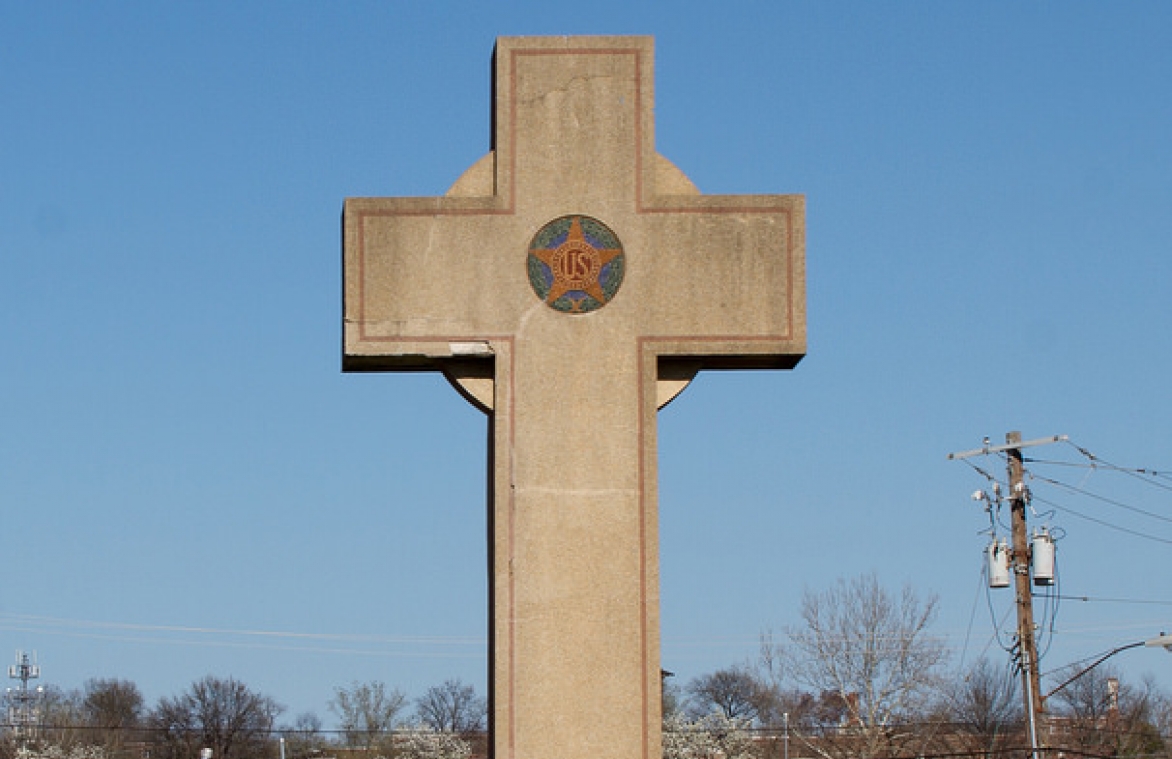 This cross, known as the Peace Cross, was erected in 1925 to honor men from Prince George's County, Maryland, who had died during fighting in World War I. Later the state  acquired the land and has maintained the monument, which sits in the center of a busy traffic circle, ever since. (Photo by David via flickr, CC BY 2.0)

Though the cross has been there for more than 90 years, the 4th U.S. Circuit Court of Appeals ruled last year that the cross violated the Establishment Clause because it amounted to an impermissible endorsement of religion.

Now, the case goes to the High Court, giving the justices the opportunity to explain the meaning of these ten words.

Some believe that this Latin cross – immense in size and immersed in Christianity – represents the epitome of the government advancing and elevating the Christian religion over other religions and non-religion. Others view the passive monument primarily as a civic supporting of war veterans.

An interesting aspect of this case concerns what the justices might say about what is still the leading test for Establishment Clause cases in the lower courts – the so-called Lemon test named after the case Lemon v. Kurtzman (1971), one of several leading First Amendment tests from the Burger Court.

In Lemon, Chief Justice Warren Burger wrote: “First, the statute must have a secular legislative purpose; second, its principal or primary effect must be one that neither advances nor inhibits religion. Finally, the statute must not foster an excessive government entanglement with religion.”

The Lemon test has met with significant criticisms from Court members through the years. Perhaps most famously, Justice Antonin Scalia disparaged the Lemon test as “a ghoul in a late-night horror movie” that “stalks our Establishment Clause jurisprudence.” Justice Clarence Thomas has called the Lemon test “utterly indeterminate.” Yet, it survives and even thrives in the lower courts.

The Cato Institute, in its amicus brief, also calls on the Court to abandon Lemon: “The Court should now squeeze Lemon out of its jurisprudence—and shouldn’t let stare decisis stop it from doing so.”

However, the test does have its defenders. The Muslim Advocates, in their amicus brief, call the Lemon test, though a “frequent punching bag,” remains “a remarkably stable test that has been in near-unanimous use in the past 25 years, and indeed throughout the 47 years since Lemon was decided.”

The justices could inter the Lemon test or they could decide the case without referencing the test. If the justices don’t employ the Lemon test, it will remain interesting to see if the Court takes an approach rooted in history and tradition, focuses on whether there is actual religious coercion under a coercion test, or takes a route that emphasizes neutrality.

In any event, those concerned about how religion and government interact or intersect should pay close attention to the Court’s upcoming decision in American Legion v. American Humanist Association.