Policinski: Mandating free speech on campus could have opposite effect of government surveillance and review 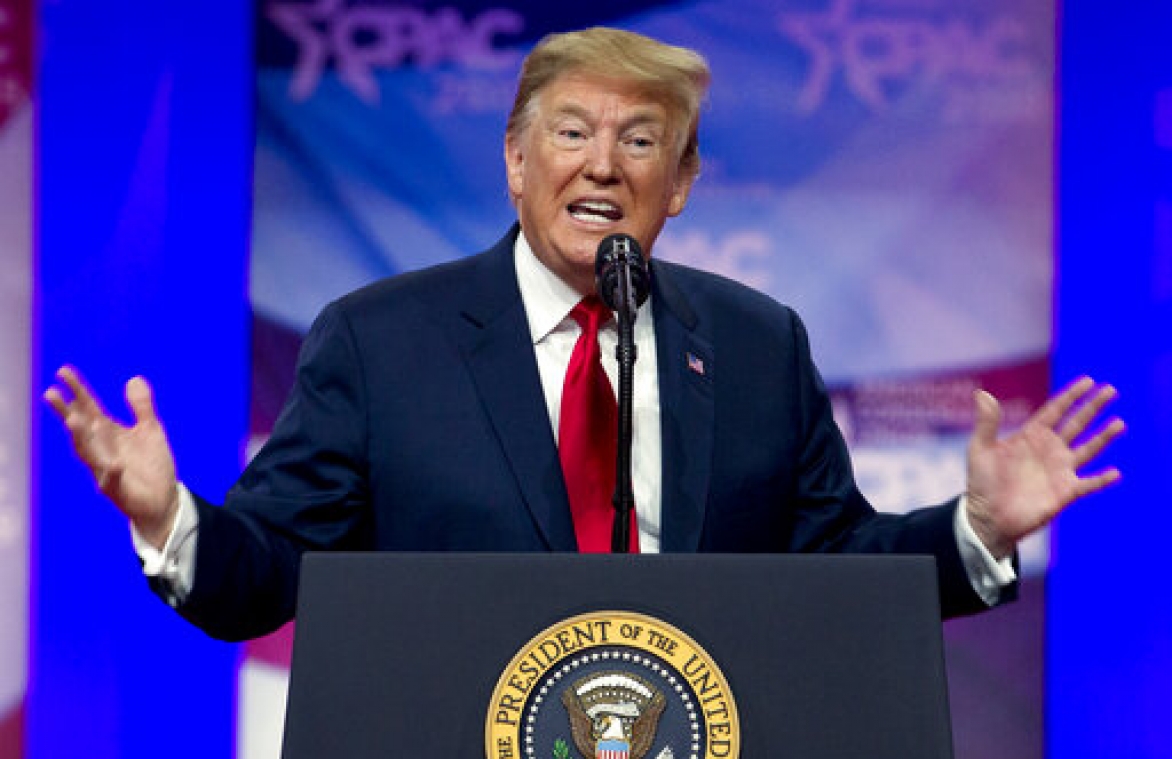 In this March 2, 2019, photo, President Donald Trump speaks at Conservative Political Action Conference in Oxon Hill, Md. Trump’s proposed executive order to protect free speech on college campuses follows a growing chorus of complaints from members of Congress and others that the nation’s universities are attempting to silence conservative voices by heckling, disinviting and otherwise discouraging their presence. (AP Photo/Jose Luis Magana. Used with permission from The Associated Press)

At first hearing, President Trump's recent announcement of a planned presidential order to mandate free speech on college campuses might seem to be just what free-expression advocates would support.

However, regrettably, they should not. Keep reading, please.

Taking a shortcut through the First Amendment in the name of free speech is not a good idea — and that's what Trump's approach will be, no matter how admirable the stated goal of encouraging and protecting the rights of all in university communities to speak freely.

Trump's approach is to tie freedom of speech to federal funding for universities: "If they want our dollars, and we give it to them by the billions... Free speech. If they don't, it will be costly. That will be signed soon," he told the Conservative Political Action Conference annual convention.

Conservatives have long complained — in my view, with justification at some higher-ed institutions — that liberal academics have created an atmosphere where views of faculty or outside speakers from "the right" are unwelcome. In recent years, a number of high-profile, controversial speakers claiming conservative credentials have been heckled, harassed or prevented from speaking.

In 2017, conservative author Ann Coulter canceled a speech at the University of California, Berkeley, amid fears of violent student protest. At Texas Southern University, Houston, a speech by Sen. John Cornyn, R-Texas, was canceled because of student opposition.

In announcing his initiative last weekend, Trump cited a Feb. 19 incident in which a man recruiting for a conservative group was punched by one of two men who confronted him at UC Berkeley. But even that example raises questions about how Trump's proposed "carrot and stick" approach would work and whether it is appropriate there or elsewhere.

Neither the recruiter nor his assailant was reported to be connected to the university. The attacker was arrested, as existing law provides, regardless of where the punch was thrown. Presumably, local justice will run its course without need of a federal, campus-focused "backup."

Deciding which incidents result in loss of funds could cause problems

How would — and should — a university be held accountable for the actions of non-university persons? How many incidents, and what kinds of incidents, must occur to rise to the level of a "free speech penalty" that will punish a campus community of thousands or tens of thousands of students? One, two, 10? Who decides and by what measure? Does a punch count 10 times more on the "penalty tally" than a shouted insult?

And what if the punch takes place on a private university campus? Do we want government bureaucrats imposing "free speech" rules on those institutions now constitutionally outside the government's purview?

Conservatives and liberals alike would historically seem to stand together in opposing government intervention or control over such private enterprises. We ought not hysterically surrender such rights without considering what might be the next "justified" need to trample the independence of non-public colleges and universities.

Should colleges be punished for the actions of a few?

Another, larger question: Just how widespread is the conflict over conservative speakers, or the entire issue of liberal versus conservative campus speech conflicts? In recent years, as the Freedom Forum Institute has gathered information, made campus visits and convened discussions nationwide, a few observations have emerged: At the vast majority of colleges and universities, speakers of all stripes come and go without objection — the larger battle is not student protest, but student distraction and disinterest regardless of subject matter.

Perhaps 50 campuses out of 4,000-plus higher-education institutions have been embroiled in controversies that directly engage free speech. Granted, in that small group, a number are high-profile or highly-respected institutions. Worrisome, but not worthy of a blanket government surveillance and review system that would be required to fairly impose such draconian penalties on entire campuses for what are likely the actions of a few.

Rather, let us say openly and clearly that colleges should be held by all of us to the high standard of being marketplaces of ideas. Make that criterion one when considering what college to attend or where to make an alumni donation.

Some would say academic freedom means the right to evaluate and exclude some ideas — to focus on the proven and accepted. However, that can quickly morph into intellectual ossification — the collegiate equivalent of what the French scholar Alexis de Tocqueville warned in the 1830s would be the greatest danger to the United States' new and innovative commitment to free expression and democracy: The "tyranny of the majority," in which alternative views would cease to be heard.

Let us follow principles already set out by some leaders in the academic world that decry overt or hidden censorship and disavow the false gods of safety, security and "ideas just too dangerous to be heard."

As to the latter, yes, there are indeed dangerous ideas and inflammatory speakers with no goal other than self-promotion. But it is a futile and dangerous tactic to attempt to suppress a bad idea or arbitrarily extinguish a flame-throwing speaker — particularly in the Internet Age.

Better to propose a new idea and listen to anyone with ideas worth considering — on or off campus.

Gene Policinski is president and chief operating officer of the Freedom Forum Institute. He can be reached at gpolicinski@freedomforum.org, or follow him on Twitter at @genefac.