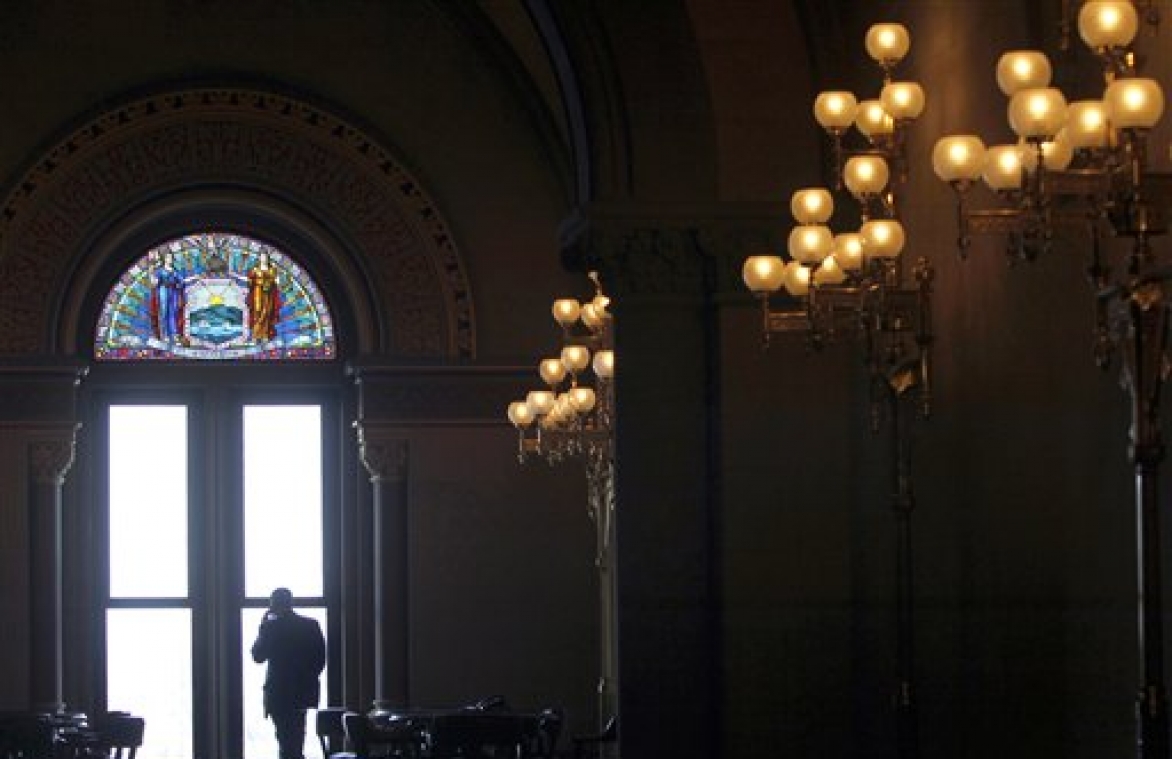 In this Jan. 10, 2011 file photo, a man talks on a phone outside the Assembly Chamber at the Capitol in Albany, N.Y. In Albany, the budget process is often compared to the old Soviet Politburo - but, some say, more secretive and more in the red. Despite a reform bill that passed two years ago, legislative leaders still craft budget bills behind closed doors and send them out for a quick vote. (AP Photo/Mike Groll, File, used with permission from The Associated Press.)

This is Sunshine Week, a celebration of open government records that should rank up there with National Random Acts of Kindness Week and Mother’s Day for universal support.

Sadly, that’s not the case. This week was designed to remind Americans that they have a right to inspect public records and attend public meetings. That should be a no-brainer. Despite our political polarization, there’s a grand total of no one who thinks government spending should go unchecked and unexamined.

Yet governments continue to ignore or circumvent access laws, and legislatures try to find new exceptions to the access laws that do exist. Despite the value of open records and open meeting laws, there’s little public pressure to force politicians to be more transparent. The result is that legislators can make the public’s business as private as possible and not suffer consequences at the ballot box.

If the phrase “Sunshine Week” was intended to convey the sanitizing effect of doing the public’s business in public, there’s a more apt weather metaphor these days. The quest for freedom of information is facing “a polar vortex,” according to Tim Franklin, a Freedom of Information Act advocate and senior associate dean at Northwestern University’s Medill School of Journalism.

Support for access to government records and meetings is arguably at its lowest in decades, Franklin says: “We’re at the biggest crossroads for FOI probably since the federal FOI was enacted in the ‘60s.”

And that’s dangerous. Think about it. The outcome of local, state and national legislative elections are determined more than ever by special interests with big budgets looking to influence the way laws and regulations are written. At a time when we need to know much more about how our government makes decisions, we’re seeing efforts to limit access and, in turn, scrutiny.

Lawmakers and policymakers are pretty emboldened and taking a lot of things which have been traditionally public and making sure that’s no longer the case,” says Mark Horvit, associate professor at the University of Missouri School of Journalism and the former executive director of Investigative Reporters and Editors.

A win for open records is now under attack

Horvit offers a glaring example. In Missouri, advocates for access to public information won a rare victory at the polls in November, when voters overwhelmingly passed a constitutional amendment requiring that legislative records and proceedings be open to the public. Changing the state constitution of course, is a very big deal, trumping any potential tampering by legislators. But it appears the lawmakers don’t grasp that.

The Missouri House has now approved an exemption to the state’s public records law that would keep the public from seeing any document containing “advice, opinions and recommendations” concerning pending legislation.

“In other words, pretty much any communication with a state legislator would become none of the public’s business, unless that legislator thinks so," wrote Ray Hartmann in the Riverfront Times. “That’s an outrageous notion, even for a state legislature traditionally known to regard ethics as a contagious disease. But to have it come on the heels of a constitutional amendment to the contrary, passed with a victory margin of 569,480 votes, is actually fairly spectacular."

It’s not surprising that a free press is pushing hard against efforts to conduct the public’s business in secret. It always has.

A free press is the antidote to secrets

But there was a time when news organizations had the revenue to take those battles to court and win. “The biggest trend that worries me is … local and regional news organizations not having the wherewithal to challenge government officials to get access to records and meetings,” says Medill's Franklin. “I think it’s a huge problem.”

Compounding the challenge is that much of the public sees freedom of information as something that benefits the news media and not them. They’re not inclined to support access for the press, particularly when the president of the United States calls the news media the “enemy of the people” and rails against “fake news.”

Of course, the irony is that access to government records can be the very best way to establish the truth and accuracy of a news article.

How can we fight back? Three modest suggestions:

► Subscribe to your local newspaper. That’s the best way to fund the fight for information.

► Remind your legislators, particularly at the state level, that sunshine laws and open public meetings requirements are important to you. They haven’t heard enough of that.

► Remember that we pay government employees’ and public officials’ salaries through our taxes. They work for us, not the special interests, and we have every right to know exactly what they’re doing with our investment.

Ken Paulson is the dean of the College of Media and Entertainment at Middle Tennessee State University, director of MTSU’s new Free Speech Center and a member of USA TODAY's Board of Contributors. Follow him on Twitter: @kenpaulson1