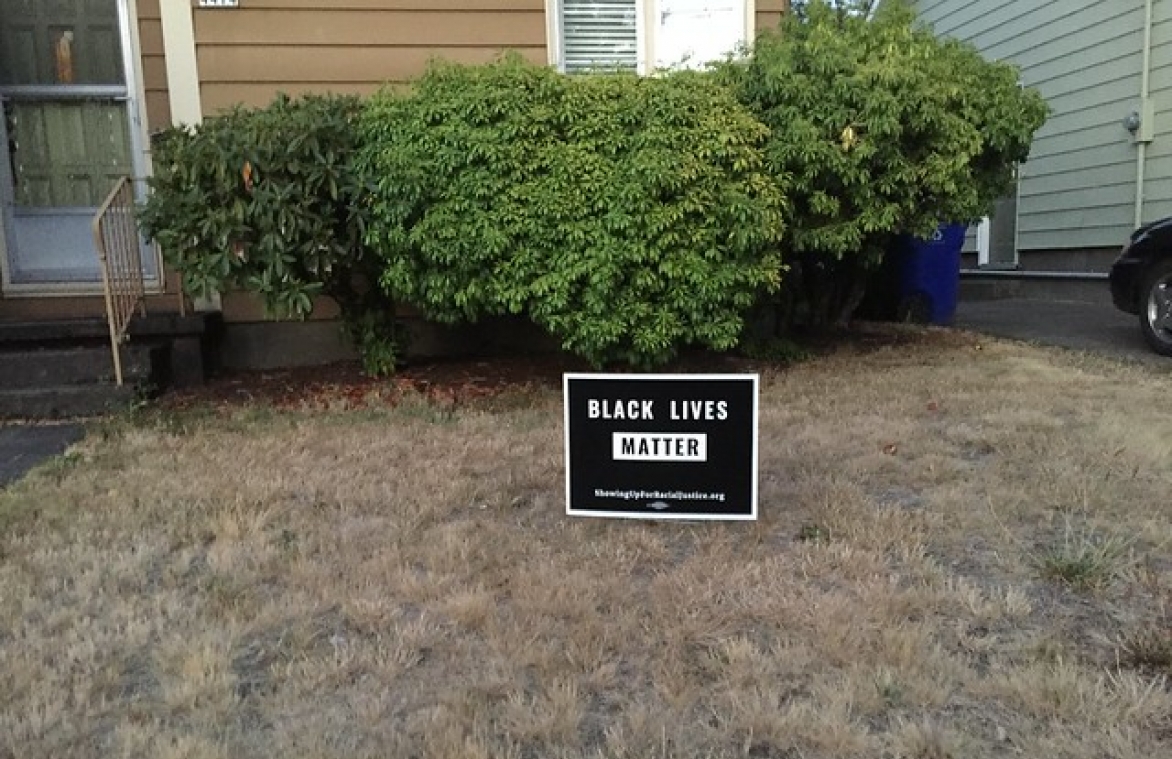 A Missouri man who received a summons charging him with violating his town's sign ordinance took the town to court. He had three signs in his yard in the St. Louis suburb of Bel-Nor, including a Black Lives Matter sign. The city only allowed one sign and one flag. The 8th Circuit Court found the sign ordinance was a violation of free speech rights outlined in the First Amendment. (Photo of a Black Lives Matter sign by FriedArt via Flickr, CC BY 2.0)

A Missouri town ordinance that limited residents to one freestanding sign and one flag violates the First Amendment, a three-judge panel of the 8th U.S. Circuit Court of Appeals has ruled in Wilson v. City of Bel-Nor.

The appeals court determined that the law was an impermissible content-based restriction on speech that was not narrowly tailored.  The court panel also ruled the ordinance was substantially overbroad.

Lawrence Wilson, a resident of the town, challenged the ordinance after he received an information and summons charging him with violating the city’s sign ordinance.   Wilson had three signs in his yard – two signs were political campaign signs and the third was a “Black Lives Matter” sign.

Any poster, object, devise [sic] or display, situated outdoors, which is used to advertise, identify, display, direct or attract attention to an object, person, institution, organization, business, product, service, event, idea, belief or location by any means, including but not limited to words, letters, figures, designs, symbols, colors, logos, fixtures, cartoons or images.

Another section of the ordinance defined a flag as “any fabric or bunting containing distinctive colors, patterns or symbols used as a symbol of a government or institution.”

On appeal, the three-judge panel of the 8th Circuit unanimously reversed.   The panel reasoned that the definitional sections of the ordinance “show that the content of a flag or sign determines whether it is a flag or sign.”    The appeals court reasoned that “applying the ordinary meaning of ‘government or institution,’ a fabric with a Cardinals logo is a ‘sign,’ while a fabric with an Army logo is a ‘flag.’”

The panel determined that the ordinance draws distinctions based on the message of the sign or flag and, thus, is content-based.

Under First Amendment jurisprudence, content-based laws are subject to strict scrutiny.  This means that the government must prove that it has a compelling governmental interest in the ordinance that is very narrowly drawn.

The town argued that it is a small town with a lot of schools, small residential lots, and many narrow streets.  As such, the town contended the ordinance was important for traffic safety and aesthetics.  The 8th Circuit panel disagreed, finding that the town failed to show a “genuine nexus” or connection between the regulation and its purported interests.

The panel also determined that the law was unconstitutionally overbroad, as the town’s ordinance would apply to a “Welcome Home” banner on a garage, an ADT security window sticker, Christmas lights, or even Happy Birthday balloons on the front door of a home.

The panel also emphasized the importance of residential signs, citing the Supreme Court’s decision in City of Ladue v. Gilleo (1994).  “Due to the special significance of the right to speak from one’s own home, severe restrictions of this right do not afford adequate alternatives,” the panel wrote.