News
November 3, 2021 by The Associated Press 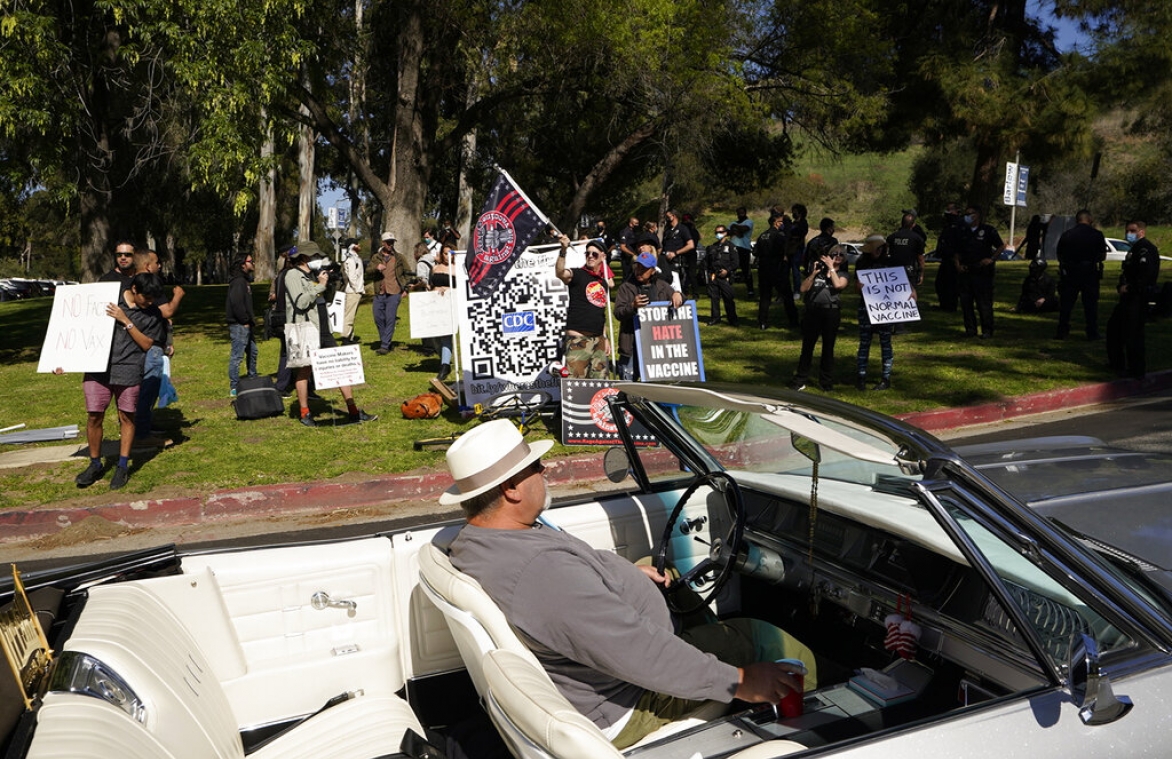 SACRAMENTO, Calif. (AP) — A federal judge has thrown out California's new 30-foot buffer zone designed to restrict protests at coronavirus vaccination sites, though his ruling left in place other parts of a new state law despite arguments that it infringes on free speech.

The law that took effect Oct. 8 makes it illegal to come within 30 feet of someone at a vaccination site "for the purpose of obstructing, injuring, harassing, intimidating, or interfering with that person."

U.S. District Judge Dale Drozd ruled Oct. 30 that the 30-foot limit, which is contained in what he called the law's "uncommon definition of 'harassing,'" is too restrictive.

So he issued a temporary restraining order barring the state from enforcing the "harassing" portion of the law, while leaving in place the ban on obstructing, injuring, intimidating or interfering.

Those other portions of the law "appear to more precisely target the harms that the Legislature sought to prevent and further the state's interest in ensuring that Californians can freely access vaccination sites," he ruled.

Opponents said the bill is written so broadly that it includes any vaccine and can also apply to anti-abortion protesters.

Alliance Defending Freedom sued on behalf of Right to Life of Central California, which is located next to a Planned Parenthood abortion clinic that offers the HPV vaccine against the human papillomavirus, but not vaccinations against COVID-19. The anti-abortion group said the law, as written, would block its members from approaching women on the public sidewalk and street outside its own building and even in its own parking lot.

The problem in California, the most populous state, lies with the law's definition of harassing, which "is far broader than the dictionary definition of the word 'harass,'" Drozd said in his 28-page decision.

It includes approaching within 30 feet of a person or vehicle, without consent, "for the purpose of passing a leaflet or handbill to, displaying a sign to, or engaging in oral protest, education, or counseling with, that other person in a public way or on a sidewalk area."

Moreover, the state attorney general's interpretation of the law, in court filings and oral arguments, "is so vague that it is conducive to different and conflicting interpretations on what conduct is even prohibited by its terms," Drozd wrote.

California Attorney General Rob Bonta's office, which defended the law, said it would "continue to defend the law and work to ensure that any Californian who would like to be vaccinated is able to obtain their COVID-19 vaccine without intimidation."

"There can be no doubt that access to COVID-19 vaccines is essential to 'stemming the spread of COVID-19,' and that a state's interest in ensuring its citizens can access and obtain COVID-19 vaccinations is compelling," Dozd wrote, though he said it is less clear whether that should apply to all vaccines.

"Despite these undeniable facts, the court recognizes that the COVID-19 vaccines have been a subject of controversy and protest," he wrote.

Violators could face up to six months in jail and a fine up to $1,000. But lawmakers included an exemption for picketing during a labor dispute, which Drozd said created another legal conflict.

Both sides claimed victory after the initial decision.

"Free speech won the day not just for our client, Right to Life, but for every other speaker in California," Alliance Defending Freedom Senior Counsel Denise Harle said in a statement. She said the law's exemption for labor picketing created a "double standard in restricting pro-life outreach while permitting other types of speech."

Democratic Sen. Richard Pan, a pediatrician, prominent vaccination proponent and author of the bill, said the judge "ultimately ruled against anti-vaccine extremists who attempt to obstruct and interfere with vaccination delivery."

Crystal Strait, board chairwoman of bill proponent ProtectUS, said in an email that the ruling "is a step in finding balance between dangerous/reckless behavior of extremists and the first amendment."

"Creating speech-free zones around every drug store, stand-alone health clinic, and supermarket in the state in order to re-assure the occasional customer seeking a vaccine of some kind is hardly a narrowly drawn restriction on speech," the foundation's lawsuit contends.

The foundation's request for a restraining order in that case has yet to be decided.