'We have to be there': AP photographer recalls Capitol siege

News
January 6, 2022 by The Associated Press 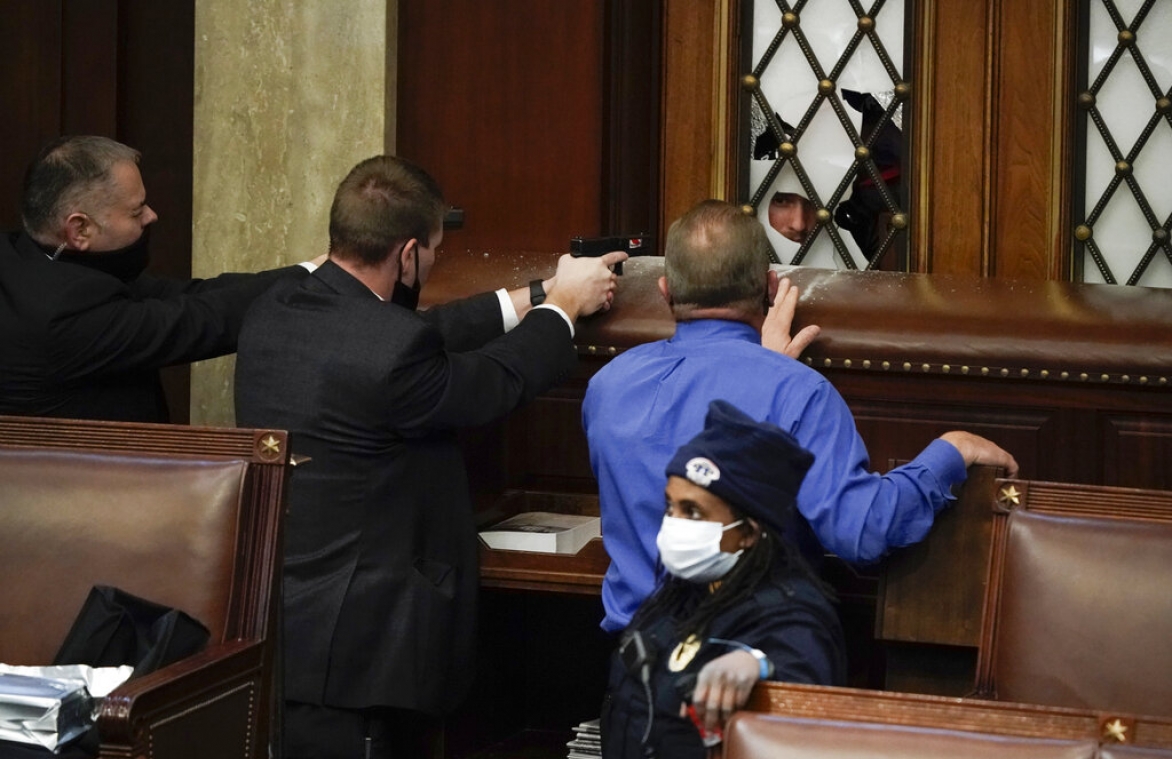 Police with guns drawn watch as rioters try to break into the House Chamber at the U.S. Capitol on Wednesday, Jan. 6, 2021, in Washington, D.C. AP Photo/J. Scott Applewhite

By J. SCOTT APPLEWHITE, Associated Press
WASHINGTON (AP) — The U.S. Capitol was under siege. By Americans.

Editor's note: It was Jan. 6, 2021, on Capitol Hill in Washington, D.C., and Associated Press photographer J. Scott Applewhite was in the middle of it all — and was the eyes of the world in some respects. His camera recorded images that we are still gazing at today. Here, he remembers some moments that stood out to him — moments that, so many months later, he is still digesting as a photojournalist and as an American.
___

"The Capitol has been breached!" the Capitol Police officer shouted to lawmakers. Tear gas was in the Rotunda. "Get out your escape hoods and prepare to evacuate!" the officer said.

Glass was breaking in the main door to the chamber of the House of Representatives — the very door where you see the president enter for the State of the Union address. Quickly, the police and a few lawmakers grabbed benches and cabinets and barricaded the door.

From the officers came loud commands: Evacuate. Now. Stragglers were not tolerated — members of Congress, staffers, journalists, all.
But the move to safety was not immediate. Because they didn't know what was on the other side of the door.

You could hear the growl of the mob just outside. In the chamber, the officers were focused, their guns aimed. And I was trained on the door as well — with a telephoto zoom.

I was pretty sure I was right where I was supposed to be. I kept my lens focused on that reinforced door. Then: There was an eye, trying to see inside — the face of one of the rioters wearing a Trump hat. What he did not see were the guns aiming inches from his face.

I kept steady and held tight on that spot.
___

When the breach of the Capitol was announced and evacuation began, it was a chaotic and uncertain process. Evacuate to where? The mob was on the other side of the doors.

Eventually, the officers announced that tear gas had been deployed in the nearby Rotunda. All were instructed to don escape hoods that were stashed under the seats. That was part of the preparedness in the wake of 9/11. I didn't put one on because I needed to see to use my camera.

Andy and I were both in the balcony that overlooks the House chamber. Andy had been on a side where some members of Congress were watching and the police presence was plentiful. I had been on the opposite side with about 30 reporters and photographers. The officers eventually pushed everyone out.

Andy must have been among the last. He said the final frame he shot in the chamber was one of me sitting alone in the House press gallery. Andy caught the terror in the faces of elected members of Congress as they dived for cover. When police rushed the members out, Andy kept his camera up, capturing rioters held at gunpoint by tactical officers outside the chamber.

The Capitol is where I work every day, and I am a familiar face to most police. When those on the chamber floor shouted up at me to get out, I told them I was fine and refused to leave. This is what we do: We stay and report.

One got more belligerent until another officer, a special agent in the protection division who guards the leadership, intervened. He shouted over, "Scotty's OK!" Two words is all it took (that and the obvious — they had their hands full with a mob on the other side of door).

The officer, in plain clothes, was Lt. Michael Byrd. Moments later, outside the House chamber, he shot and killed unarmed protester Ashli Babbitt as she climbed through a broken window of a barricaded door leading to the Speaker's Lobby.
___

From that point on, I was the only journalist and the only person remaining in the balcony to witness the standoff in the House chamber.
When the mob began to break the glass in the door, I could barely see the face of one of the rioters. The cops and a new congressman with a law enforcement background tried to de-escalate the situation even as guns were pointed at the hole in the glass.

The room was pretty dark. I was looking through a long zoom lens usually used outdoors for shooting sports or wildlife. I had brought it along for a little extra reach — closeups of faces and details during Electoral College voting, which is normally illuminated with TV lights.

The siege at the chamber door lasted about 45 minutes, until tactical units moved the intruders away. I was then able to move around the balcony above the House floor to record the deserted room and the debris. The gavel used by House Speaker Nancy Pelosi sat on the dais, surrounded by discarded emergency escape hoods and debris.

After the lawmakers and press evacuated, those doors were secured. For another two hours, I was locked in. Then an FBI tactical team swept through and threw me out of the building.

The joint session of the House and Senate resumed about 9 p.m. Andy Harnik and I persevered through the night and finished about 3 a.m. I went back to my office in the Senate Dirksen building, ate some soup and slept from 5 to 7 a.m. Then we started the next day's coverage.

People have given me a lot of applause in the past year for what I did on Jan. 6, 2021, for the photos I took, for refusing to leave during the final evacuation. But I want to make one thing clear: I was simply doing my job. As were so many of my colleagues.

AP photographers John Minchillo and Julio Cortez suffered the brunt of the riot as they bravely threw themselves between the mob and the police. Manny Ceneta maneuvered his way around the Senate side of the Capitol to capture Trump supporters as they were stopped outside the chamber. Freelancer Jose Luis Magana took the photos of demonstrators scaling the wall of the west side of the Capitol. Jacquelyn Martin and Carolyn Kaster were also at the Trump rally and the march to the hill.

I was working directly with Washington photo editor Jon Elswick, who expedited my photos to the wire. Jon was patient with me because I was sending lots of pictures in a short time. This is usually not good form; we normally use judgment and discretion in how many we send in a short time so that the photo desk isn't overwhelmed.

In this case, I told Jon I was going to move as much as I could. Why? My previous experience in conflict zones and working around the military and police reminded me that my cameras might be destroyed by the mob or my disks confiscated by police. The ability to transmit from the camera ensured that the AP — and the world — would get the photos.

The fact is, I never really came face-to-face with the mob, except through a telephoto lens. And it really did take every one of us to record this story. Most of us in the Capitol that day — Getty, Reuters, AFP and others — couldn't move around without interference from the mob or the Capitol Police. Each of us covered what we could.

The result, if you will, was like a mosaic — views from different photographers all around the Capitol that composed a more complete picture.

I've witnessed plenty of violence and upheavals before, coups and revolutions, when I was doing conflict coverage abroad, but I am still shocked to experience it here. It was Americans attacking America.
___

What I saw, and what my camera captured, during the standoff at the House chamber a year ago was this: a place where a line was drawn — with courage, duty and guns.

And though they ultimately failed, in a very real way the rioters succeeded. It was an hour of anarchy, with an unchecked mob bringing one of the country's most sacred ceremonies — and the peaceful transfer of power — to a screeching, scary halt.

I often think about what might have happened if Pelosi had not called the Electoral College back immediately. Postponing a few days might have seemed the normal thing, but that didn't happen. The rioters had mostly escaped the police. Donald Trump was still in the White House for two more weeks. Jan. 6 was one of the longest days in our short American history. Imagine how long 14 more days might have been.

I've been at this a while, and I've learned: Some moments are hard to look at and some are hard to look away from. But whatever the moment might be, the job of the photojournalist — the responsibility — is to show people what they can't see on their own.

To do that, we have to be there.

J. Scott Applewhite is a longtime Associated Press photographer in Washington who has covered seven administrations since 1981. He marked his 40th anniversary with the AP the day before the Capitol attack.