Biden shied away from news conferences, interviews in Year 1 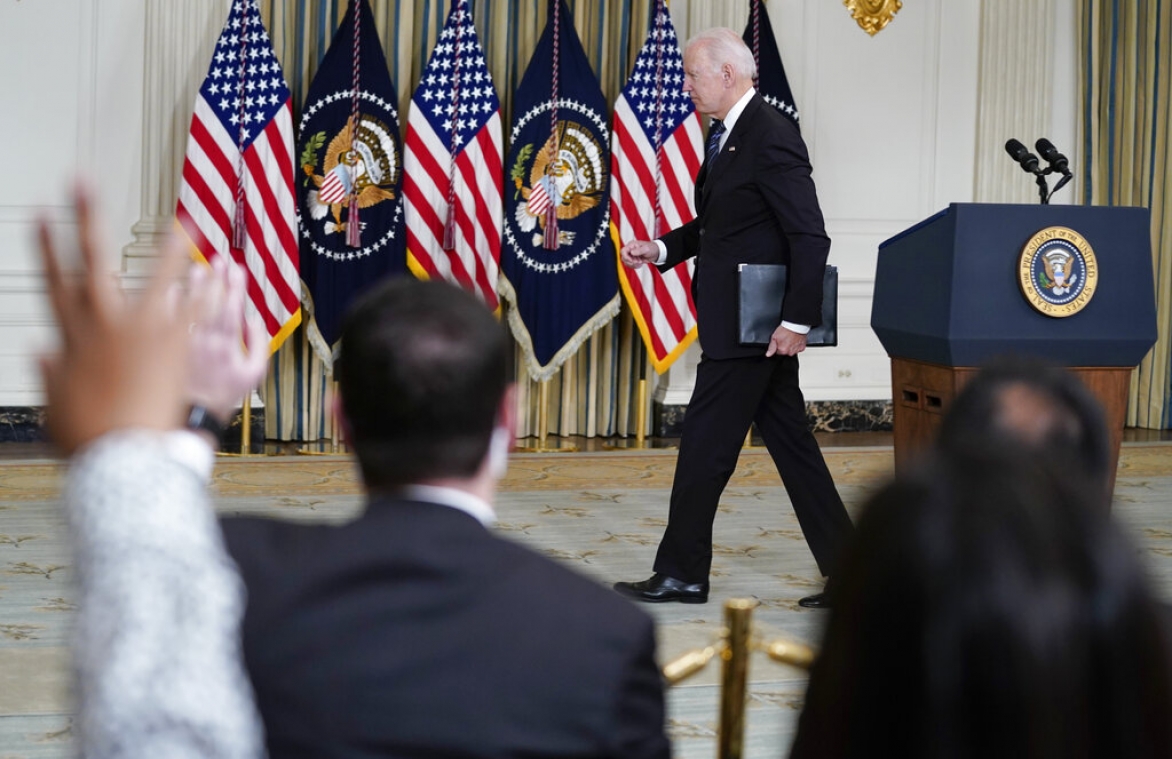 WASHINGTON (AP) — In what's become a familiar scene, President Joe Biden lingered after delivering a recent speech on the pandemic as reporters fired a barrage of questions.

He bristled at a query about the shortage of COVID-19 rapid tests, answered another about omicron-spurred travel restrictions and sidestepped a third about whether Sen. Joe Manchin failed to keep his word when he torpedoed Biden's social services and climate spending plan.

"I'm not supposed to be having this press conference right now," Biden said at the end of a meandering response that didn't directly answer the question about Manchin.

Seconds later, Biden turned and walked out of the State Dining Room, abruptly ending what's become his preferred method for his limited engagements with the press.

The dynamic has the White House facing questions about whether Biden, who vowed to have the most transparent administration in the nation's history, is falling short in pulling back the curtain on how his administration operates and missing opportunities to explain his agenda.

Biden does more frequently field questions at public appearances than any of his recent predecessors, according to new research published by Martha Joynt Kumar, a professor emerita in political science at Towson University and director of the White House Transition Project. He routinely pauses to talk to reporters who shout questions over the noise of Marine One's whirring propellers as he comes and goes from the White House. He parries with journalists at Oval Office photo ops and other events. But these exchanges have their limitations.

"While President Biden has taken questions more often at his events than his predecessors, he spends less time doing so," Kumar notes. "He provides short answers with few follow-ups when he takes questions at the end of a previously scheduled speech."

Biden has done just 22 media interviews, fewer than any of his six most recent White House predecessors at the same point in their presidencies.

The 46th president has held just nine formal news conferences — six solo and three jointly with visiting foreign leaders. Ronald Reagan, whose schedule was scaled back early in his first term in 1981 after an assassination attempt, is the only recent president to hold fewer first-year news conferences, according to Kumar. Reagan did 59 interviews in 1981.

Former President Donald Trump, who regularly pilloried the media, did 92 interviews in his first year in office, more than two dozen of those with friendly interlocutors at Fox News. But Trump also held lengthy sessions with ABC News, The Associated Press, The New York Times, Reuters and other outlets whose coverage he impugned throughout his presidency.

The White House has fielded requests from news outlets — and complaints from the White House Correspondents' Association — for Biden to do more one-on-one interviews and formal news conferences.

Press Secretary Jen Psaki has pushed back, arguing that a formal news conference with "embroidered cushions" on journalists' seats is unnecessary since Biden answers questions several times a week.

But those exchanges often don't allow for follow-up questions, and Biden can ignore questions he might not want to answer.

"Fleeting exchanges are insufficient to building the historical record of the president's views on a broad array of public concerns. We have had scant opportunities in this first year to learn the president's views on a broad range of public concerns," said Steven Portnoy, president of the White House Correspondents' Association and a reporter for CBS New Radio. "The more formal the exchange with the press, the more the public is apt to learn about what's on the man's mind."

The president has answered questions at 55% of events where he's delivered remarks or an address, more than even two of the more loquacious presidents, Bill Clinton (48%) and Trump (41%). White House officials pointed to such frequent interactions with reporters as evidence that Biden has demonstrated a commitment to transparency. Officials also suggested that the pandemic has also affected the number of interviews and news conferences in the administration's first year.

"I think that we have been very transparent," White House Deputy Press Secretary Karine Jean-Pierre said. "I don't think you can just piecemeal and I think you have to look at it as a whole."

Trump had regular and sometimes lengthy exchanges, with reporters as a thwapping Marine One awaited him on the South Lawn. Biden has continued the tradition of "chopper talk," a nickname coined by late-night host Stephen Colbert for strained exchanges, though he tends to keep the exchanges brief.

At other moments, Biden has used the exchanges to drive the news cycle. Asked after a private visit with Pope Francis at the Vatican in October whether they discussed abortion, Biden said it didn't come up. But then he quickly pivoted to asserting that Francis told him he was "a good Catholic and I should keep receiving communion." The entire back-and-forth with reporters lasted about a minute.

The administration has put a premium on finding ways to speak to Americans where they are as it tries to maximize the president's limited time for messaging efforts, according to a White House official who spoke on the condition of anonymity to discuss the administration's communications strategy.

To that end, Biden has been interviewed by YouTube personality Manny Mua and went on the "The Tonight Show" to push his domestic agenda and encourage people to get vaccinated. The White House believes such platforms can help the president more easily reach middle-class workers or young Americans who aren't glued to the cable networks or The New York Times.

Biden has also leaned on celebrities with big social media followings — including actress and songwriter Olivia Rodrigo and Bill Nye the Science Guy — who have done videos with Biden to help bolster his vaccination push and plug his major domestic spending initiatives.

Biden is hardly the first president to look beyond the mainstream news media to try to connect with the public.

Trump frequently called in to Fox News' opinion shows, directly reaching his base without the filter of journalists.

Brian Ott, a Missouri State University communications professor who studies presidential rhetoric, said the scarcity of Biden news conferences and interviews with mainstream news media may help explain why Biden's approval ratings are near historic lows even though most polls show that much of his domestic agenda remains popular with a majority of Americans.

While pop culture and social media offer opportunities to connect with a segment of America, Ott said, the president's connecting to the electorate through traditional broadcast and print news outlets — and holding formal news conferences — will be critical to correcting that disconnect.

"The presidency has always been a predominantly rhetorical enterprise," Ott said. "You can't drive an agenda without vision casting and part of that has to go through the mainstream press."