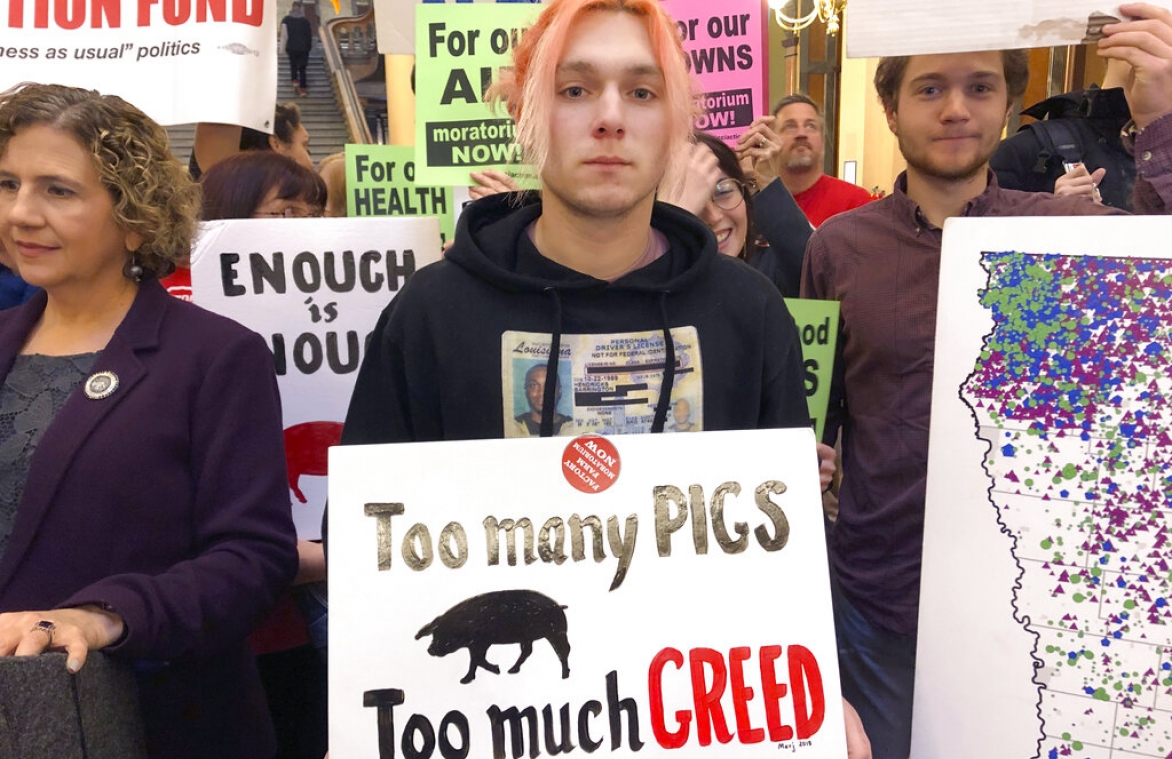 Gabriel Shubert, of San Diego, Calif., a Grinnell College student, attends a rally against the expansion of hog farms in the state at the Iowa Capitol in Des Moines, Iowa, Jan. 23, 2020. AP Photo/David Pitt

DES MOINES, Iowa (AP) — A federal judge has struck down an Iowa law that seeks to stop animal-welfare groups from secretly filming livestock abuse, the latest in a decade of legislative measures and judicial rejections.

The decision March 14 rejected the law approved by Iowa lawmakers in March 2019 that created a trespass charge punishable by up to a year in jail for those who use deception to gain access to a farm to cause physical or economic harm. A temporary court order will prevent enforcement of the law, and the restriction is expected to soon become permanent.

The state can appeal to the 8th U.S. Circuit Court of Appeals.

The case is one of many so-called ag-gag laws that have surfaced in the U.S. in recent years that pit the right of farmers to protect their property from trespassers against animal-welfare advocates. Farmers argue intruders could track in disease and want to portray their livestock practices unfairly, while animal-welfare groups say producers don't want the public to see how farm animals are treated.

Judge Stephanie Rose said the Legislature has a right to determine whether agricultural facilities are entitled to legal protections, but the First Amendment to the U.S. Constitution does not allow the government to ignore free-speech protections and keep out only those with certain points of view.

"To be sure, some of the investigations may violate other laws. However, the state of Iowa may not single out individuals for special punishment based on their critical viewpoint of agricultural practices, which they have sought to do" with the challenged law, she wrote.

She pointed out that the groups that sued the state want to shine a light on issues of public concern, such as animal abuse, food safety and agricultural working conditions. Those groups have included the Animal Legal Defense Fund, People for the Ethical Treatment of Animals and the Center for Food Safety.

Cristina Stella, a lawyer with the Animal Legal Defense Fund, said it's important that courts have recognized that undercover investigations produce information that is valuable for the public to understand how their food is made. That includes treatment of animals, workers and the impact on the environment.

"These topics are really vital for the public to know about, for the public to understand what is happening in our country and to have their choices reflect the information that they receive about them," said Stella, whose organization has brought lawsuits challenging ag-gag laws in many states.

Such laws have been struck down in Iowa, Kansas, Utah and Wyoming, and some provisions have been rejected in Idaho. Lawsuits are continuing in Arkansas, North Carolina and Iowa.

Iowa alone has passed four such laws since 2012 and all but one remain tied up in legal battles or appeals. Significant portions have been struck down by courts, while a few provisions that enhance the penalties for trespassing in farms and meat-production facilities have survived.

Some states have passed such laws that haven't been challenged, and in those states undercover investigations have been deterred, Stella said.

Farmers and sympathetic lawmakers said laws are needed to enforce the basic right of livestock producers to control who enters their property and barns, said Eldon McAfee, a former farmer and a lawyer who has represented legislators defending the laws.

"Do we have a right on our own as producers to restrict who comes into our facilities, just to say no, you can't come in there? Yes, we do have that right," he said.

He said livestock farmers aren't hiding anything. Instead, he argues, they don't trust the activists to portray accurately how animals are treated.

In a heavily agricultural state like Iowa, where farmers raise millions of pigs each year for meat and chickens for eggs, protecting a huge segment of the state's economy from bad publicity is a priority.

However, shining a spotlight on modern livestock practices has arguably led to changes. For example, public concern about the living conditions of egg-laying hens has been key to a shift in the last 10 years of 4% of eggs coming cage-free hens to 28%. That figure is expected to increase to about 70% in the next four years.