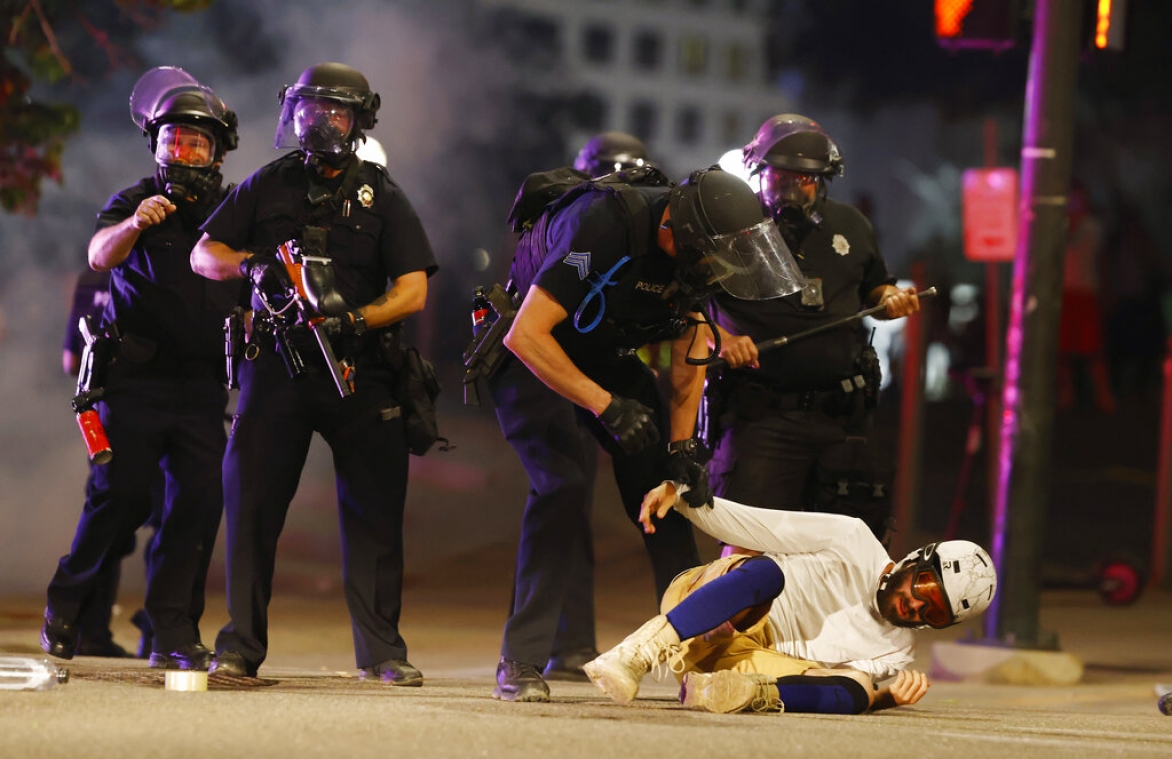 Denver police officers prepare to take away a man who fell May 28 after they used tear gas and rubber bullets to disperse a protest outside the state Capitol in Denver over the death of George Floyd. AP Photo/David Zalubowski, file

DENVER (AP) — Jurors on March 25 found police used excessive force against protesters, violating their constitutional rights, during demonstrations over the killing of George Floyd two years ago, ordering the city to pay a total of $14 million in damages to a group of 12 who sued.

The jury of two men and six women, largely white and drawn from around Colorado, returned its verdict after about four hours of deliberations. The verdict followed three weeks of testimony and evidence that included police and protester videos of incidents.

Lawyers involved believed it was the first trial in a lawsuit challenging officer tactics during the 2020 protests that erupted around the nation over the police killing of Floyd and other black people.

The protesters who sued were shot at or hit by everything from pepper spray to a Kevlar-bag filled with lead shot fired from a shotgun. Zach Packard, who was hit in the head by the shotgun blast and ended up in the intensive care unit, received the largest damage amount — $3 million.

One of the protesters' lawyers, Timothy Macdonald, had urged jurors to send a message to police in Denver and elsewhere by finding the city liable during closing arguments.

"Hopefully, what police departments will take from this is a jury of regular citizens takes these rights very seriously," he said after the verdict.
Elisabeth Epps, a lawyer and activist who was one of the protesters who sued, said the attorneys for the city gaslighted the protesters during the trial, questioning their account of what happened. At one point, a lawyer for Denver called her a "professional protester" after she testified that she had attended protests since she was a child and had received training about how to respond to being tear-gassed. She grew emotional talking about what it meant to have the jury side with the protesters.

The protesters said the actions of police violated their free-speech rights and rights to be protected from unreasonable force. Jurors found violations of both rights for 11 of the protesters and only free-speech violations for the other. The protesters claimed Denver was liable for the police's actions through its policies, including giving officers wide discretion in using what police call "less-lethal" devices, failing to train officers on them, and not requiring them to use their body-worn cameras during the protests to deter indiscriminate uses of force.

During the trial, Denver admitted that mistakes were made at the protests, which it says were unprecedented in their size, duration and amount of violence and destruction. Over 80 officers were injured as protesters hurled rocks, water bottles and canned food at them, and the state Capitol, the hub of the protests, incurred $1.1 million in damage, according to the city.

Lawyers for the protesters who sued stressed they were not accused of being violent themselves.

One of Denver's lawyers, Lindsay Jordan, told jurors that the city had planned a large training in crowd control in spring 2020 because of the upcoming presidential election, but it was canceled because of COVID-19. She stressed that mistakes made by officers during the protests did not automatically equate to constitutional violations, noting thousands of people returned to exercise their free-speech rights despite the force police used over the five days of demonstrations.

"The violence and destruction that occurred around the community required intervention," she said.

Five Denver police officers have been disciplined for their actions during the protests, according to the department. Another officer, who was new and still on probation, was fired during the protests after posting a photo of himself and others dressed in tactical gear on social media with the comment, "Let's start a riot."

Aggressive responses from officers to people protesting police brutality nationally have led to financial settlements, the departures of police chiefs and criminal charges.

In Austin, Texas, officials have agreed to pay over $13 million to people injured in protests in May 2020, and 19 officers have been indicted for their actions against protesters. Last month, two police officers in Dallas accused of injuring protesters after firing less-lethal munitions were charged.

However, in 2021, a federal judge dismissed most of the claims filed by activists and civil liberties groups over the forcible removal of protesters by police before then-President Donald Trump walked to a church near the White House for a photo op.