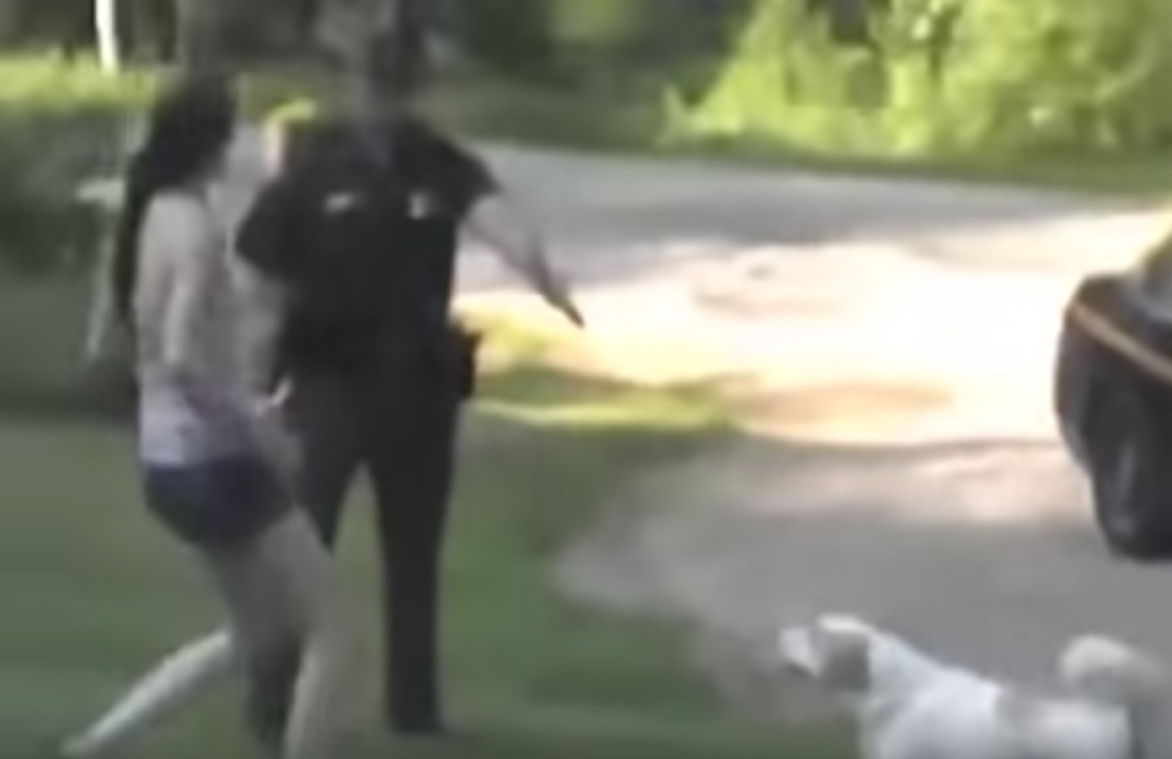 Screenshot of video posted on YouTube showing Tiffanie Hupp challenging a West Virginia state trooper who was at the house after a complaint by a neighbor about the family's dog. A panel of the 4th Circuit U.S. Court of Appeals reinstated Hupp's civil rights claims, in part because the judges questioned whether the trooper had the authority to arrest Hupp for obstruction when she objected to the trooper's threat to shoot the dog.

A state trooper may have violated the constitutional rights of a woman when he arrested her after she objected to the trooper's threatening to shoot her father-in-law’s dog, a federal appeals court has ruled.

Two state troopers came to the home of Clifford Myers in Waverly, W.Va., in response to a complaint about a dispute between Myers and a neighbor, over Myers’ husky-Akita mix. The neighbor contended that Myers’ dog had killed several cats and terrified the neighbors’ family members. Myers said these contentions were not true.

When the troopers came to Myers' house, one of the troopers, Trooper Seth Cook, pointed his gun at the dog. Tiffanie Hupp, Myers’ daughter-in-law, ran outside the home to object to Cook’s drawing of his weapon.

A verbal dispute of some sort took place between Cook and Hupp. Cook later testified that Hupp was cursing and screaming at him. Cook and another state trooper arrested Hupp for obstruction.

Hupp’s husband, Ryan, recorded the incident with his cellphone. Upon learning of this recording, Cook entered the home and confiscated the cellphone and other electronic devices.

A jury later acquitted her of the criminal charge. After this acquittal, Hupp and other family members sued the state troopers, including Cook, primarily for violating their Fourth Amendment rights to be free from unreasonable searches and seizures and also for excessive force.

A federal district court dismissed the civil rights claims based on qualified immunity – a doctrine that insulates government officials from liability unless they violate clearly established constitutional or statutory rights.

On appeal, a three-judge panel of the 4th U.S. Circuit Court of Appeals reinstated the constitutional claims in part because the judges questioned whether Cook had the authority to arrest Hupp for obstruction.

According to the panel, individuals have the right to challenge police authority as long as they do not engage in fighting words – defined by the U.S. Supreme Court as words which by their very utterance inflict injury or cause an immediate breach of the peace.

Cook testified that Hupp approached him in an aggressive manner and did not comply with his verbal order. She told the officer she did not have to listen to him on her own property. Hupp countered that she said, “Whoa, whoa, don’t do that, stop.”

“Even if Trooper Cook’s testimony is to be believed – that Hupp told him that he could not tell her what to do on her property – such language is a challenge to the trooper’s authority and does not constitute … menacing language,” the panel wrote in Hupp v. Cook.

“While a reasonable jury could credit Trooper Cook’s version of the interaction, it could instead believe Hupp that no fighting or insulting words or other opprobrious language was used,” the panel wrote.

The appeals court decision seems sound. Law enforcement officials should not arrest people merely because they questioned the authority of officers. Absent threats or other menacing conduct, people have the right to question authority in a free society.