Perspective
April 26, 2022 by The Associated Press 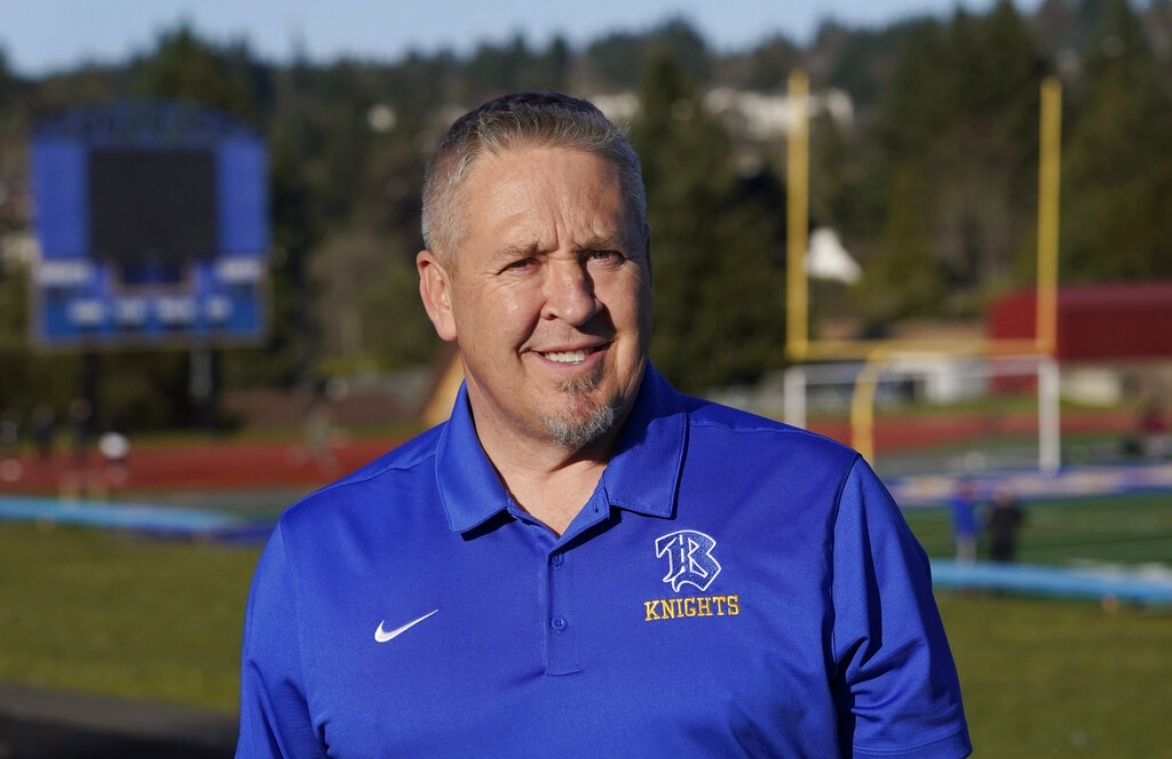 The Supreme Court has consistently banned school-sponsored prayer in public K-12 schools, whether at the start of the school day, during graduation ceremonies or before football games. Under the Equal Access Act, the Supreme Court has affirmed that students may organize prayer and Bible-study clubs during non-instructional hours. Even so, school staff and outside adults may not actively participate.

Lower courts have mostly forbidden public school teachers from openly praying in the workplace, even if students are not involved. Yet the Supreme Court has not directly addressed such a case – until now.

Kennedy v. Bremerton School District, a case from Washington state, for which oral arguments were heard on April 25, 2022, could usher in more religious activities by teachers and other staff in public schools.

At issue is whether a school board violated the rights of Joseph Kennedy, a football coach it suspended, and whose contract it did not renew, because he ignored its directive to stop kneeling in silent prayer on the field after games. Kennedy claims that the board violated his First Amendment rights to freedom of speech and freedom of religion, along with his rights under the Civil Rights Act, which prohibits employment discrimination.

The Supreme Court faces two key questions: whether prayers public school employees say in front of students are protected by their First Amendment rights; and, if they are, whether educational officials must still prohibit them in order to avoid promoting particular religions and violating the establishment clause.

From my perspective as a specialist in education law, the case is noteworthy because the high court should resolve sticky questions surrounding whether public school employees can pray when supervising students, or if doing so crosses the line and becomes impermissible government speech.

Kennedy v. Bremerton also reflects the inherent tension between the First Amendment's two clauses on religious freedom: The free-exercise clause protects individuals' right to practice their faiths as they wish, while the establishment clause forbids the government from "establishing" a religion.

In other words, a tension exists between public employees' right to religious expression within the boundaries of the law and employers' needs to avoid violating the establishment clause.

Facts of the case
In 2008, Kennedy, a self-described Christian, worked as head coach of the junior varsity football team and assistant coach of the varsity team at Bremerton High School. He initially knelt on the 50-yard line after games, regardless of the outcome, offering a brief, quiet prayer of thanks.

While Kennedy first prayed alone, eventually most of the players on his team, and then members of opposing squads, joined in. He later added inspirational speeches, causing some parents and school employees to voice concerns that players would feel compelled to participate.

The school board directed Kennedy to stop praying on the field because officials feared that his actions could put it at risk of violating the First Amendment. The government is prohibited from making laws "respecting an establishment of religion, or prohibiting the free exercise thereof" – generally understood as meaning public officials cannot promote particular faiths over others.

In September 2015, school board officials notified the coach that he could continue delivering his inspirational speeches after games, but they had to remain secular. Although students could pray, he could not. Even so, a month later Kennedy resumed his prayers. He had publicized his plans to do so, and was joined by players, coaches and parents, while reporters watched.

Bremerton's school board offered accommodations to allow the coach to pray more privately, which he rejected. At the end of October, officials placed him on paid leave for violating their directive, and eventually chose not to renew his one-year contract. He filed a suit in August 2016.

Lower-court rulings
The coach's suit raised two major claims – namely that the school board violated his rights to freedom of speech and religion. However, the 9th U.S. Circuit Court of Appeals twice rejected Kennedy's claims, in 2017 and 2021, resulting in his appeal of the second case to the Supreme Court.

The 9th Circuit denied Kennedy's claim that he had the right to private free speech on the field, reasoning that because he was a public employee, reasonable observers could have assumed his prayer had the school board's support. In particular, the court found that he acted as a public employee, not a private citizen. The court did explain that educators are free to display their faith on their own time, such as when Kennedy sat in the stands as a fan during a game after he was suspended.

Turning to Kennedy's freedom-of-religion claim, the appeals court was satisfied that the school board's restrictions on his activity met a well-established principle: Public officials have to demonstrate a compelling government interest before they can limit someone's fundamental rights, such as freedom of religion, and the restrictions must be narrowly tailored to achieve that interest.

The 9th Circuit also rejected the coach's claims under Title VII of the Civil Rights Act of 1964, which prohibits employment discrimination on the basis of race, religion, sex or national origin. Nor did the court accept his claims that the board failed to accommodate him, or that officials retaliated against him in not renewing his contract.

Decision ahead
As part of its analysis, the Supreme Court is likely to consider whether the coach risked sending the message he was acting with the school board's approval, as a form of protected speech, or if his prayers were unprotected private speech.

In addition, the court may address whether Kennedy failed to act as a role model, as is expected of educators. Courts consistently agree that school employees who work with students forgo some rights by virtue of their positions. For example, the 7th Circuit affirmed that a school board in Indiana could dismiss a teacher who violated its policy by not remaining neutral about current events in class.

As in Kennedy, boards can choose not to renew the contracts of employees who violate their policies. But until now, public employees on the job who ignored their employer's lawful policies have been unable to claim that they were exercising their rights to freedom of religion or speech as a defense. It remains to be seen whether the Supreme Court will acknowledge that educators cannot ignore lawful directives at work, in order to avoid unduly influencing their students, or whether the justices will open the door to granting teachers greater freedom of expression.

Judging from the oral arguments, it is difficult to know how the justices will rule – especially when, as Justice Stephen Breyer observed, "One of my problems in this case is the parties seem to have different views of the facts."

However, members of the Court more favorable to accommodating religion seem willing to allow educators greater freedom to express their views in school settings – as suggested by Justice Neil Gorsuch's musing, "If we thought that the School District misunderstood the establishment clause teachings of this Court, what should we do?" If so, this would signal a significant change.

As is often the case in high-profile disputes, the Supreme Court is expected to rule in late June or early July. While the case is unlikely to end disagreements over public employees' prayer as free speech, in my view, the justices will likely walk a fine line in balancing the interests of educators who wish to pray at work and school boards seeking to avoid violating the Constitution.