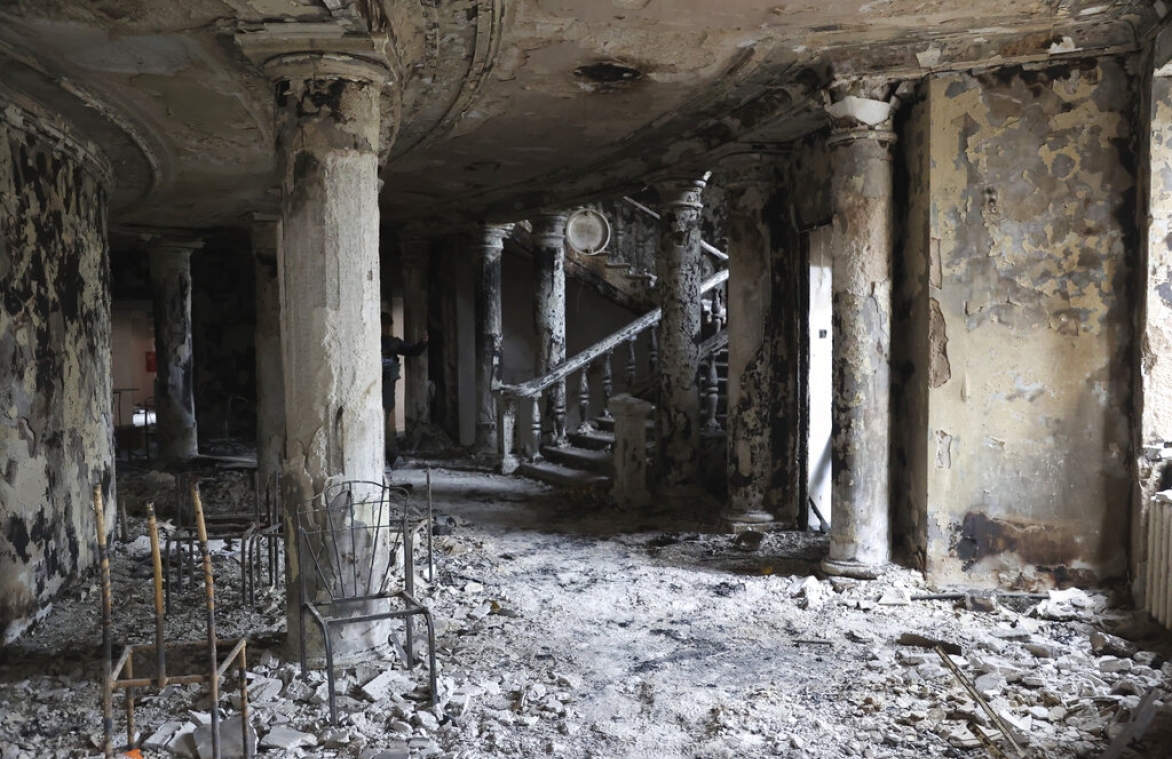 Debris covers the inside of the Donetsk Academic Regional Drama Theatre after a March 16, 2022, bombing in Mariupol, Ukraine, in an area now controlled by Russian forces, Monday, April 4, 2022. The bombing of the theater that was used as a shelter stands out as the single deadliest known attack against civilians to date in the war. AP Photo/Alexei Alexandrov

NEW YORK (AP) — One of the more striking pieces of journalism from the Ukraine war featured intercepted radio transmissions from Russian soldiers indicating an invasion in disarray, their conversations even interrupted by a hacker literally whistling "Dixie."

It was the work of an investigations unit at The New York Times that specializes in open-source reporting, using publicly available material like satellite images, mobile phone or security camera recordings, geolocation and other internet tools to tell stories.

The field is in its infancy but rapidly catching on. The Washington Post announced last month it was adding six people to its video forensics team, doubling its size. The University of California at Berkeley last fall became the first college to offer an investigative reporting class that focuses specifically on these techniques.

Two video reports from open-source teams — the Times' "Day of Rage" reconstruction of the Jan. 6, 2021, Capitol riot and the Post's look at how a 2020 racial protest in Washington's Lafayette Square was cleared out — won duPont-Columbia awards for excellence in digital and broadcast journalism.

The Ukraine radio transmissions, where soldiers complained about a lack of supplies and faulty equipment, were verified and brought to life with video and eyewitness reports from the town where they were operating.

At one point, what appears to be a Ukrainian interloper breaks in.

"Go home," he advised in Russian. "It's better to be a deserter than fertilizer."

The Times' visual investigations unit, founded in 2017 and now numbering 17 staff members, "is absolutely one of the most exciting areas of growth that we have," said Joe Kahn, incoming executive editor.

The work is meticulous. "Day of Rage" is composed mostly of video shot by protesters themselves, in the heady days before they realized posting them online could get them into trouble, along with material from law enforcement and journalists. It outlines specifically how the attack began, who the ringleaders were and how people died.

"Looking to us for protection, they instead became some of the last victims in America's longest war," the report said.

"There's just this overwhelming amount of evidence out there on the open web that if you know how to turn over the rocks and uncover that information, you can connect the dots between all these factoids to arrive at the indisputable truth around an event," said Malachy Browne, senior story producer on the Times' team.

"Day of Rage" has been viewed nearly 7.3 million times on YouTube. A Post probe into the deaths at a 2021 Travis Scott concert in Houston has been seen more than 2 million times, and its story on George Floyd's last moments logged nearly 6.5 million views.

The Post team is an outgrowth of efforts begun in 2019 to verify the authenticity of potentially newsworthy video. There are many ways to smoke out fakes, including examining shadows to determine if the apparent time of day in the video corresponds to when the activity supposedly captured actually took place.

"The Post has seen the kind of impact that this kind of storytelling can have," said Nadine Ajaka, leader of its visual forensics team. "It's another tool in our reporting mechanisms. It's really nice because it's transparent. It allows readers to understand what we know and what we don't know, by plainly showing it."

Still new, the open-source storytelling isn't bound by rules that govern story length or form. A video can last a few minutes or, in the case of "Day of Rage," 40 minutes. Work can stand alone or be embedded in text stories. They can be investigations or experiences; The Times used security and cellphone video, along with interviews, to tell the story of one Ukraine apartment house as Russians invaded.

Leaders in the field cite the work of the website Storyful, which calls itself a social media intelligence agency, and Bellingcat as pioneers. Bellingcat, an investigative news website, and its leader, Eliot Higgins, are best known for covering the Syrian civil war and investigating alleged Russian involvement in shooting down a Malaysian Airlines flight over Ukraine in 2014.

The Arab Spring in the early 2010s was another key moment. Many of the protests were coordinated in a digital space and journalists who could navigate this had access to a world of information, said Alexa Koenig, executive director of the Human Rights Center at the University of California at Berkeley's law school.

The commercial availability of satellite images was a landmark, too. The Times used satellite images to quickly disprove Russian claims that atrocities committed in Ukraine had been staged.

Other technology, including artificial intelligence, is helping journalists who seek information about how something happened when they couldn't be on the scene. The Times, in 2018, worked with a London company to artificially reconstruct a building in Syria that helped contradict official denials about the use of chemical weapons.

Similarly, The Associated Press constructed a 3D model of a theater in Mariupol bombed by the Russians and, combining it with video and interviews with survivors, produced an investigative report that concluded more people died there than was previously believed.

AP has also worked with Koenig's team on an investigation into terror tactics by Burma's military rulership, and used modeling for an examination on the toll of war in a neighborhood in Gaza. It is collaborating with PBS' Frontline to gather evidence of war crimes in Ukraine and is further looking to expand its digital efforts. Experts cite BBC's "Africa Eye" as another notable effort in the field.

As efforts expand, Koenig said journalists need to make sure their stories drive the tools that are used, instead of the other way around. She hears regularly from news organizations looking to build their own investigative units and seeking her advice — or her students. Berkeley grad Haley Willis is on the team at the Times.

It feels, Koenig said, like a major shift has happened in the past year.

Browne said the goal of his unit's reporting is to create stories with impact that touch upon broader truths. A probe about a Palestinian medic shot by an Israeli soldier on the Gaza strip was as much about the conflict in general as her death, for example.

"We have similar mandates," the Post's Ajaka said, "which is to help make sense of some of the most urgent news of the day."