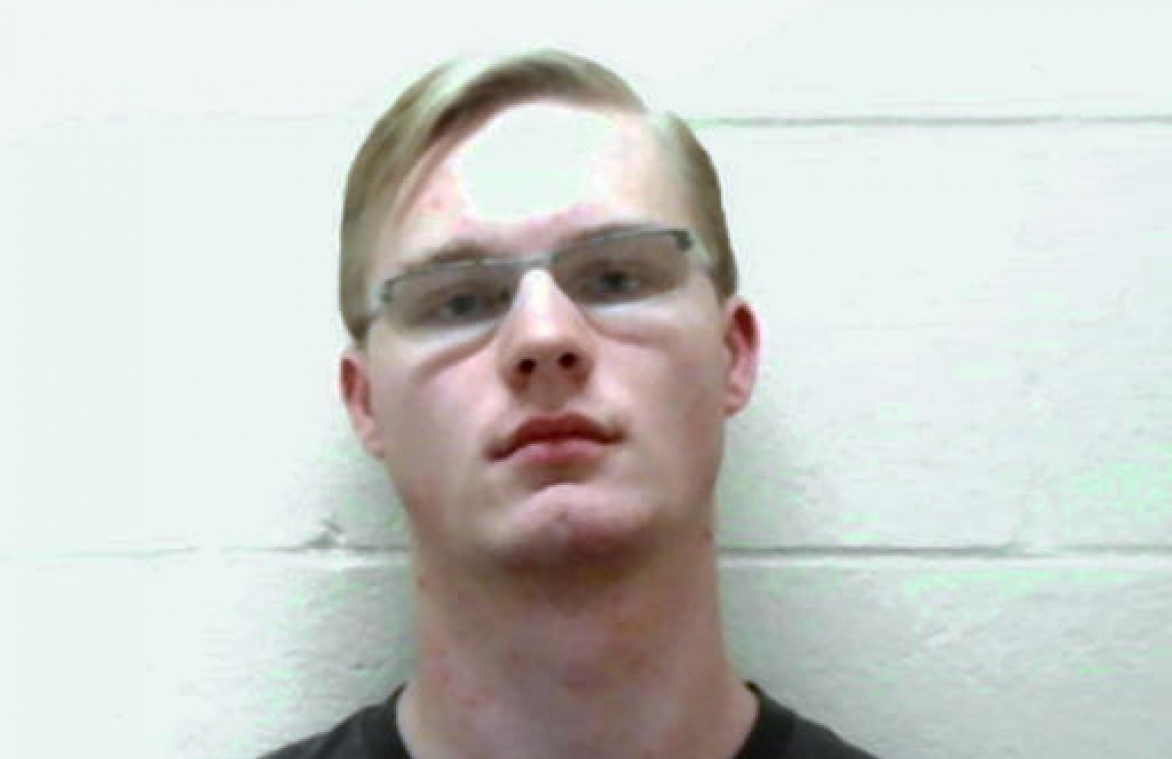 The Connecticut Supreme Court rejected the free-speech claims by former Central Conecticut State University student Austin Haughwout, who was expelled from the university in 2015 for violating the student code of conduct related to threatening behavior, including talking about guns and shooting people on campus. This June 2016 booking photo released by the Clinton Police Department of Haughwout was in relation to a later incident in which he was arrested on charges that included assault on police officers, interfering with police, risk of injury to a child, enticing a minor by computer, possession of child pornography and attempting fourth-degree sexual assault. (Clinton Police Department via The Associated Press)

University officials did not violate the First Amendment when they expelled a student for talking about guns and shooting persons on campus even though the statements may well have been nothing more than jokes, the Connecticut Supreme Court has ruled.

Officials at Central Connecticut State University expelled Austin Haughwout after a student complained that Haughwout talked about gun violence, made shooting gestures with his hand, talked about a person on his hit list, showed digital photographs of bullets, and remarked that he had loose bullets at his house.

Campus police interviewed a few other students who also remarked that Haughwout talked about guns but said that they thought he made the statements jokingly.  However, a couple of students said they also felt alarmed by some of his comments.

Campus police applied for an arrest warrant charging Haughwout with threatening in the second degree, but the state’s attorney declined the application saying there was not probable cause.  That didn’t stop campus police and officials, however, as they charged Haughwout with violating four provisions of the student code of conduct related to intimidation or threatening behavior; harassment; disorderly conduct; and offensive or disorderly conduct.

A hearing panel consisting of two administrators and one professor recommended expulsion.  The university upheld this punishment.

Haughwout then sued, alleging a violation of his free-speech rights under the U.S. and Connecticut constitutions.  He contended that he was being punished for his position on gun rights.

A trial court dismissed his lawsuit, reasoning that school officials were justified in punishing Haughwout for uttering true threats.

On appeal, the Connecticut Supreme Court affirmed in Haughwout v. Tordenti.  According to the state high court, the key inquiry was “whether an objective listener would readily interpret the statement as a real or true threat.”

The court determined that in the context of school shootings, Haughwout’s statements collectively amounted to a true threat.

Haughwout contended that he was merely joking and uttering hyperbole.  He pointed out that several students said they thought he was joking.  However, the court also noted that “some of those same students nevertheless were sufficiently perturbed to contact the university police.”

The court also partially relied on Haughwout’s repeated statements that he had ready access to weapons and ammunition.

“Accordingly, we conclude that the trial court correctly determined that the plaintiff’s statements were true threats that were not protected by the First Amendment,” the court concluded.

The Connecticut Supreme Court relied extensively on several K-12 high school decisions to support its decision that Haughwout uttered a true threat. The decision also seems to place heavy reliance on the fact that school shootings have occurred throughout the country at places like Columbine and Sandy Hook.