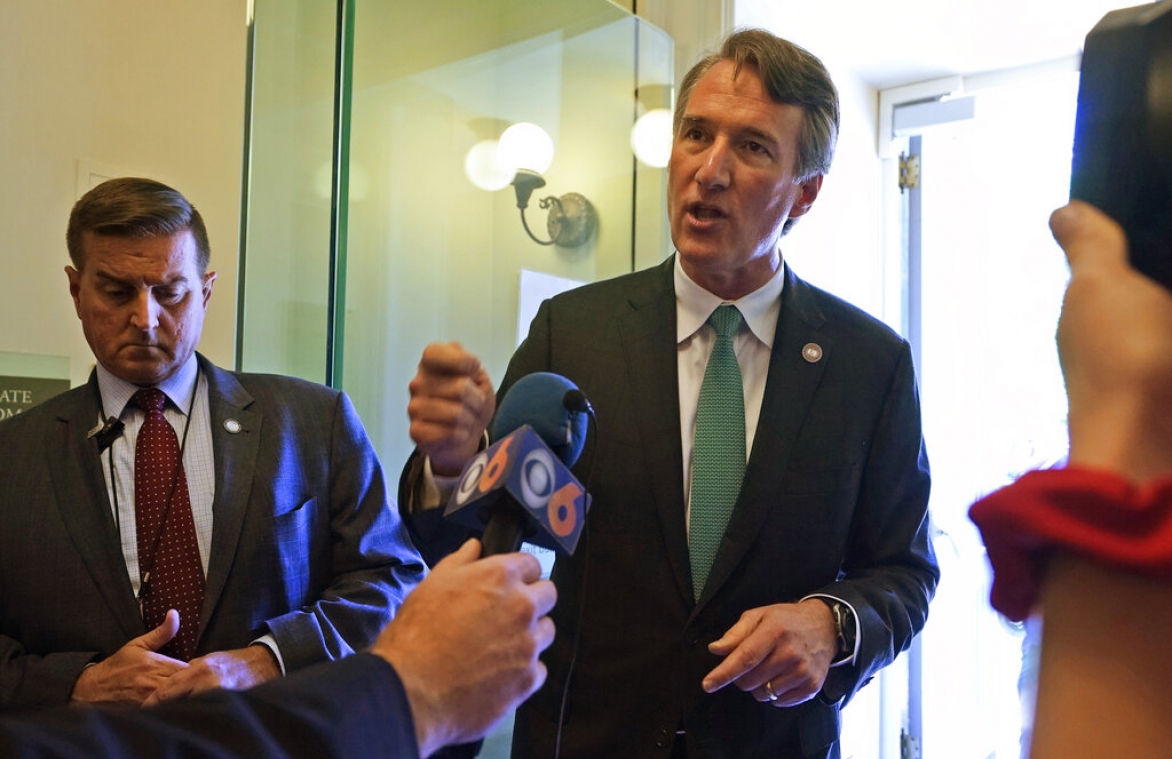 Virginia Gov. Glenn Youngkin, right, speaks to the news media after leaving a meeting of the Senate Republican caucus at the Capitol on April 27, 2022, in Richmond, Va. AP Photo/Steve Helber, file

FALLS CHURCH, Va. (AP) — Fairfax County officials have rebuffed a request from Virginia Gov. Glenn Youngkin to establish a security perimeter around the neighborhoods of U.S. Supreme Court justices living in the county after some have faced protests outside their homes.

Youngkin, a Republican, made the request May 11 in a letter to the county board of supervisors. "I fundamentally believe such demonstrations and picketing should not be allowed at the Justice's (sic) homes as they are meant to intimidate and influence the Justices," he wrote.

Three Supreme Court justices — Samuel Alito, Amy Coney Barrett and Clarence Thomas — live in the county. Justices living in and outside the county have been confronted with protests outside their homes since a draft of Alito's opinion that would overturn the Roe v. Wade abortion-rights decision was leaked.

Fairfax County Board of Supervisors Chairman Jeff McKay said Youngkin's request for a security perimeter is unnecessary and improper. He said establishing a perimeter would amount to creating an unconstitutional neighborhood "checkpoint" that would infringe on First Amendment protest rights. He also noted that protests that have occurred outside Alito's home in the Fort Hunt neighborhood have been peaceful. A federal law prohibits "pickets or parades" with the intent to influence a judge.

"We will enforce laws that serve to protect persons and property," McKay wrote. "Our officers are equally committed to protecting the First Amendment guarantees afforded to those who gather to exercise their freedom of speech."

Fairfax County Police, for their part, said through a spokeswoman that they're providing extra staffing in response to reports of planned protests "to maintain the safety and security of the public, while ensuring First Amendment rights are protected."

Youngkin also joined Maryland GOP Gov. Larry Hogan in calling on federal law enforcement entities to "take the lead and provide sustained resources" to protect the justices and ensure the neighborhoods are secure in the weeks and months ahead.

In a letter addressed to U.S. Attorney General Merrick Garland, the governors called on the Department of Justice to enforce the federal law that bars "pickets or parades" aimed at influencing a judge.

Separately, 25 Republican attorneys general wrote to Garland, citing the same law and urging him to prevent protesters "from attempting to intimidate" the justices.