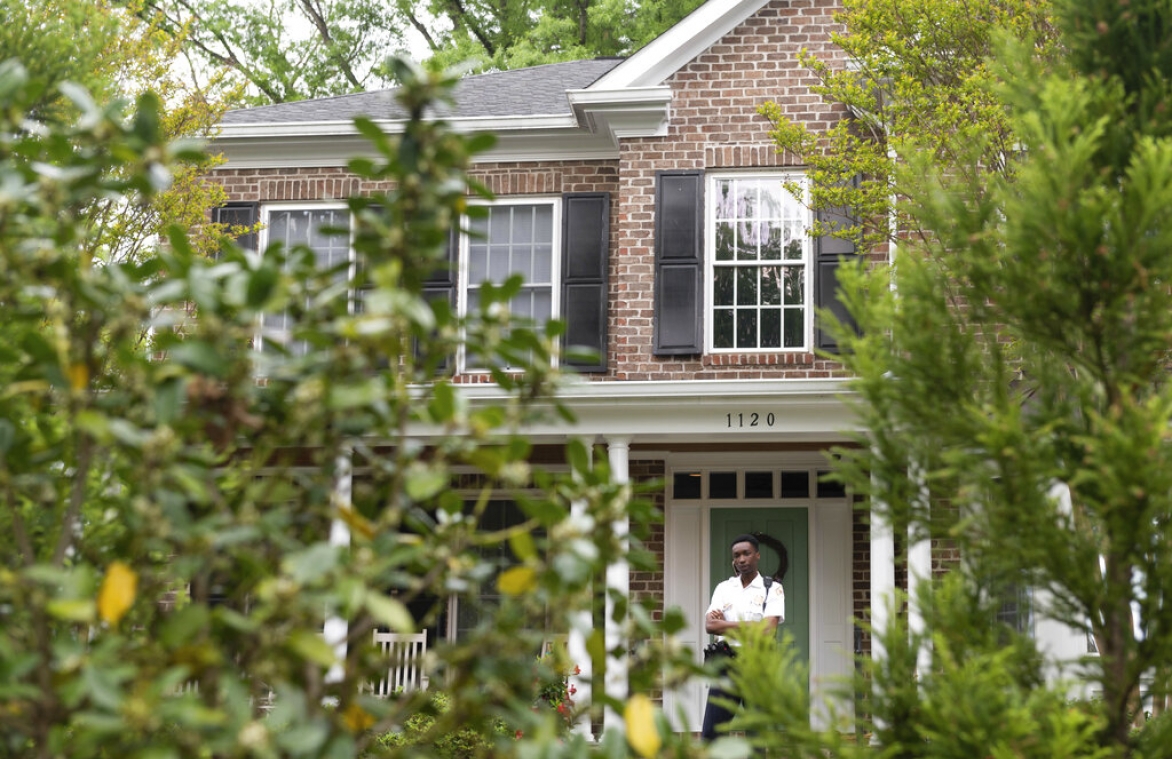 U.S. Supreme Court police stand outside the home of Justice Samuel Alito on May 5, 2022, in Alexandria, Va. AP Photo/Kevin Wolf

WASHINGTON, D.C. – Noisy protests outside the homes of conservative Supreme Court justices, in response to the leaked draft opinion indicating that the court is poised to overturn Roe v. Wade, raise at least two good questions. Are the protests a smart strategy? And are they legal?

The answer to both is: probably not.

To the extent that the abortion-rights protests are aimed at changing any minds before the Court hands down its final decision, they are likely to have the opposite effect. None of the justices is going to want to be perceived as having caved to political pressure, or to encourage similar demonstrations in their neighborhoods over other hot-button issues.

Court watchers say that of the majority who tentatively lined up behind Justice Samuel Alito’s draft opinion, Justice Brett Kavanaugh is the one most likely to be persuaded to back an alternative ruling that would uphold the Mississippi law in question (limiting abortions to the first 15 weeks of pregnancy) without formally reversing the 1973 Roe decision that legalized abortion nationwide. But it’s hard to see how the protests outside Kavanaugh’s home in Chevy Chase, Md., would make him more inclined to alter his position.

“As a strategy to change what the decision actually holds, I think it’s going to backfire,” Tabatha Abu El-Haj, an expert on protest rights at Drexel University’s law school, told me. “Once that we know that the draft was written to overturn Roe, any opinion that comes out that does not formally overturn Roe, and seems to be a product of political protest, is going to make the court seems more political, not more like an institution of law.”

(Long-time Washington residents remember how an ill-conceived pressure campaign can backfire. The “Justice for Janitors” movement of the mid-1990s, which supported better wages and benefits for custodial workers, attracted widespread sympathy at first. Then the activists decided it would be a good idea to block rush-hour traffic to call attention to their cause. This civil-disobedience tactic produced thousands of irate commuters who cheered the protesters’ arrests.)

The pro-choice protests at the justices’ homes illustrate the need to balance Americans’ cherished rights to speak freely and assemble peacefully with the importance of protecting the nation’s legal system from intimidation and harassment.

The residential picketing appears to run afoul of a 1950 federal law — Title 18, Section 1507, of the U.S. Code — that makes it illegal to picket or parade outside a jurist’s home “with the intent of influencing any judge.” Violations are punishable by a fine and up to a year in prison.

The constitutionality of the statute hasn’t been directly tested. But similar state and local laws have survived First Amendment scrutiny as long they focus on the time, place and manner of assembly, rather than the content of the views being expressed.

Whether the current protests violate the law is one thing; whether the protesters should be arrested is another. Prosecutors have wide discretion over what crimes that choose to prosecute. To win a conviction, they would have to prove an intent to influence.

“I think we are in a gray area, because it’s not clear what the protesters’ purpose is,” El-Haj says. “Is it really because they think they are going to pressure Brett Kavanaugh to change his mind? Or is it more general outrage at the courts?”

Protesters outside Kavanaugh’s home have waved placards with messages such as “Don’t like me at your house? Get out of my uterus.” At Alito’s home in Alexandria, Va., about 100 people marched and chanted “Abort the Court!” But rumors that Alito was forced to vacate to an undisclosed location for his safety were unsubstantiated.

As of this writing, local authorities have shown restraint. In Montgomery County, Md., where Kavanaugh and Chief Justice John Roberts live, police are telling protesters that, if they want to avoid arrest, they need to keep moving and avoid major disruptions.

As long as the protests remain peaceful and reasonably small, “it’s not in anyone’s interest to have people put in handcuffs and dragged away,” says Susan Gluck Mezey, a constitutional law expert at Loyola University Chicago.

Republicans, including some who’ve supported protests against abortion clinics and providers, are urging the Justice Department to take a harder line on the residential protests. Top Senate Democrats, meanwhile, are divided on the tactic.

Majority Leader Chuck Schumer of New York, where rough-and-tumble politics is as much part of the scene as bagels and the tabloids, said, “There’s protests three, four times a week outside my house. The American way to peacefully protest is okay.” But Dick Durbin of Illinois, the No. 2 Democrat in the Senate, said, “I think it’s reprehensible. Stay away from the homes and families of elected officials and members of the court.”

Some loss of privacy is, of course, part of the price of public service. But the law gives judges an extra layer of insulation, and the residential picketing is part of a troubling trend in which protesters converge on homes and disrupt the lives of people they disagree with, along with their families and their neighbors. Legal or not, it represents more incivility at a time when civility is already in short supply.