Speech and mass murder: Stay clear of the constitutional badlands 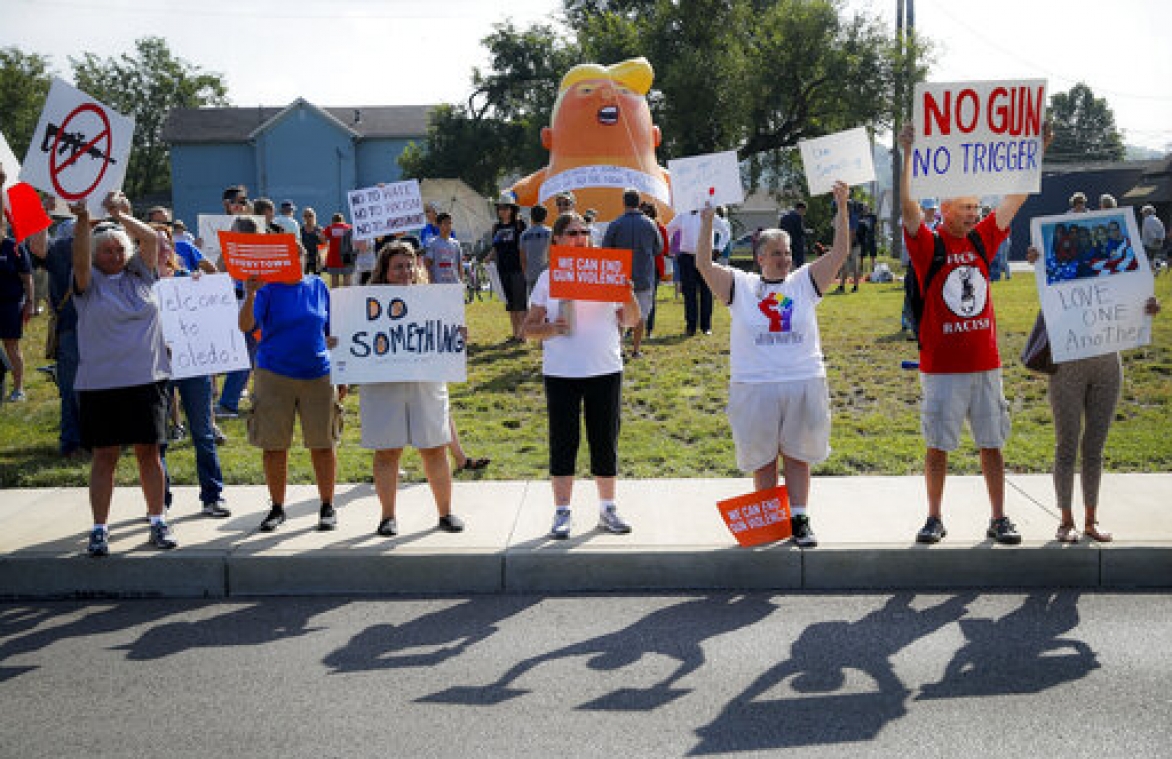 In two shootings within 13 hours, two young men wielding guns and grievances snuffed out the lives of 31 people, wounded many more, and left their families as well as a nation in shock and sadness. Desperate cries for our leaders to “Do something!” about the mass shooting carnage in El Paso and Dayton on Aug. 3-4 quickly rose to a roar.

The pain and outrage is no surprise and the calls for action have been growing increasingly insistent as the blood has flowed more freely and awfully in this nation’s streets, malls, event venues, and elsewhere. 2019 is barely past the halfway mark, and already we have endured more than 250 of these mass-murder rampages. More than 1,250 human beings, young and old, have been killed or wounded.

The resulting public discussion has focused mostly on the availability and lethality of guns, but there is a parallel debate targeting another cherished right: our freedom of speech. If that debate takes a wrong turn, we could find ourselves on a dangerous trek into the constitutional badlands.

The El Paso shooter posted a hate-filled screed on the web site called 8chan just before he went on his killing spree. He was the third mass shooter to post a rant on the site just in the last six months. The site has served as a forum for content considered so vile that it wasn’t tolerated elsewhere. On Aug. 5, however, it went dark after its web service provider canceled service. It is expected to find another provider soon.

The existence of such platforms and such content alarms many Americans.

Also on Aug. 5, President Trump addressed the nation and laid part of the blame for this uniquely American plague of mass shootings on video games and social media. A parade of White House officials, members of Congress, and pundits followed suit, asserting that social media platforms and video games were complicit in inciting these and other shooters. Those pronouncements were amplified by intense cable and others news coverage.

Meanwhile, federal law enforcement officials were making it known that First Amendment protections for free expression were preventing them from employing the same investigative tools against domestic terrorism that they use to combat foreign-based terrorism.

We’ve been down this road before

This urge to explain the inexplicable by attacking expression is not new, of course. Often, however, justification put forward for suppressing speech as a solution for violence has put reason on the rack.

Nevertheless, very few forms of human expression have escaped such scrutiny. It has threatened art, print, comic books, movies, radio, television, and video games. Since the Payne Fund studies on movie violence began in the 1920s, social scientists have conducted and published study after study on media violence, provoking a multitude of legislative hearings and a steady stir among the punditocracy.

Earlier this week, a senior research analyst for the Southern Poverty Law Center labeled Twitter an “absolute cesspool” of hate. He asserted that there was a “direct correlation between the rise of hate groups and the frequent attacks.”

As it has been with all the others forms of expression, it’s one thing to accuse social media of causing violence. It is quite another to make the case.

There is a wide gulf between social science and social suspicion. Coming up with a convincing methodology to demonstrate a causal connection between expression and violent action thus far has eluded us. Inevitably, these attempts to prove or persuade — by repetition if not by credible methodology or hard evidence — that violence in the media causes violence in life have failed.

Proposals to halt hate and violence by controlling media content advocating illegal acts must struggle to overcome more than just the First Amendment. In addition to lacking an appreciation for free-speech principles, they are burdened by a distrust of individual and parental responsibility, and a dependence on social scientists and others who flirt with causation rather than prove it.

Still many social media platforms fear what may be coming.

In recent years, several platforms, including Twitter, Google, Facebook, and YouTube, have scrambled to head off the possibility of criminal and civil penalties under federal law enacted after 9/11. Those laws could target “coordinating” with or providing “material support” to terrorists using their platforms, even though they have policies against such use or may not be aware of it.

Despite decades of free-expression agitation, however, the courts have held that, for the most part, the First Amendment protects this sort of speech, even far out on the fringe.

The Supreme Court has handed down a number of decisions that address how far the First Amendment goes in protecting this type of expression. Under current interpretations and applications of those rulings, however, the prospect of any new proposals to constrain advocacy of terror, hate, or violence could be problematic for social media platforms.

In 1969, the Supreme Court invalidated an Ohio criminal-syndicalism statute that prohibited speech advocating “the duty, necessity, or propriety of crime, sabotage, violence, or unlawful methods of terrorism.” The ruling in Brandenburg v. Ohio held that it would not be consistent with the First Amendment for the government to punish speech advocating law-breaking and violence in the abstract.

Significantly though, Bradenburg declined to extend the free-speech clause’s protection to speech that was directed toward inciting “imminent lawless action” and was likely to produce such action. Subsequent court decisions have not always been consistent in their interpretations of that imminence requirement.

There are other judicial gaps in First Amendment protection that signal caution. For example, courts have carved out a lower standard of protection for broadcast speech — because of the potential for children to encounter it — than the higher standard for the written and spoken word in other media.

In the current environment, whether the courts would countenance a different standard of protection for social media platforms because of their ubiquity and accessibility is a sobering thought.

Federal laws that have found First Amendment work-arounds in order to address the problems of foreign terrorism may provide guidance on how to craft investigative tools for law enforcement to cope with domestic terrorism.

The path forward could be troubling

First Amendment freedoms have never been secure from assault. The more troubled the times, the more troubling the proposals to limit free expression.

Here are just a few of the profoundly difficult questions that these proposals have brought into sharp relief.

There is no question, of course, that words have consequences as well as power. Our Founders were well aware of that and yet chose to write sweeping protection for freedom of expression into the Constitution. Over time, those protections have become embedded in our national conscience.

But proposals to limit speech, as we have discovered the hard way, should give pause to all Americans, from the conservative who values free enterprise, limited government, and personal liberty, to the liberal who values free-wheeling discourse, a robust marketplace of ideas, and the right to dissent.

That’s why we must make sure that “Do something!” does not translate into doing damage to Democracy.

We need to think twice, and then twice again, before lurching into that hostile territory.