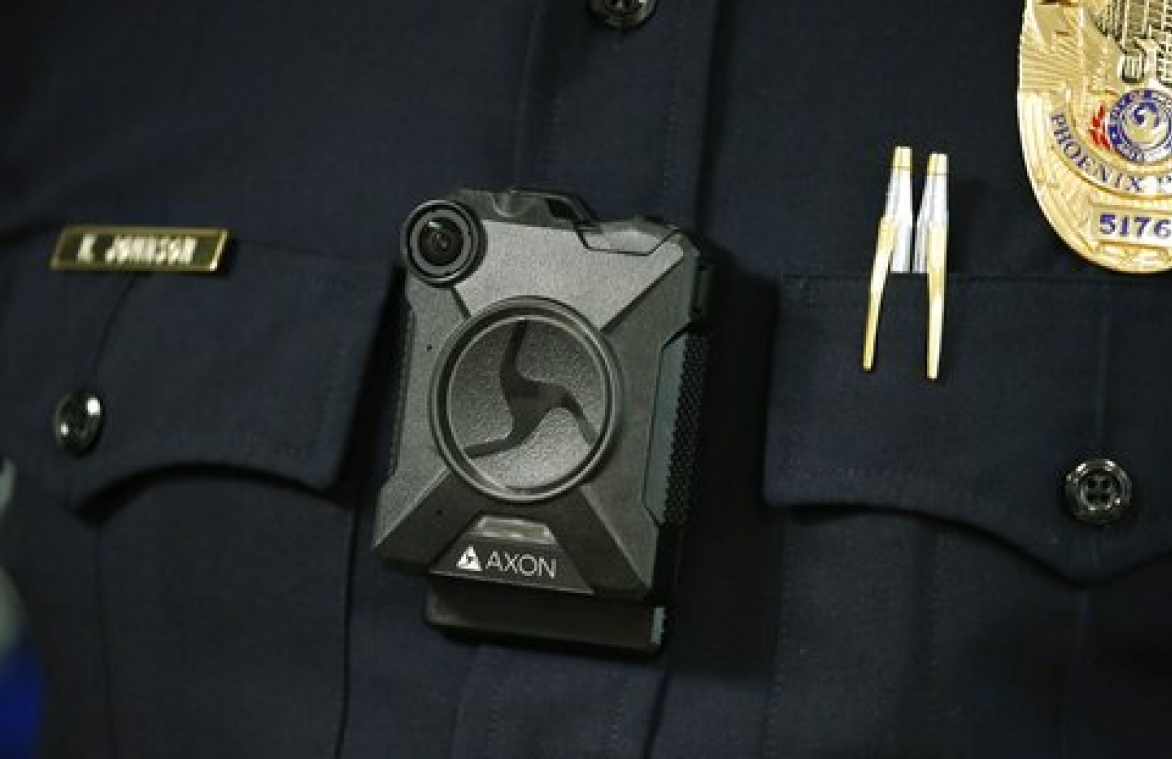 A judge allowed city councilmembers in Greensboro, N.C. to view body camera footage of an arrest of several people, but said they could not discuss the footage except among themselves. An appeals court upheld the gag order in an Aug. 6, 2019 decision, noting that the footage is not a public or personnel record and only those depicted or their personal representatives had an absolute right to view the material. (An example of a police body camera is worn here by a Phoenix Police Department officer, AP Photo/Ross D. Franklin. Used with permission from The Associated Press.)

In September 2016, several individuals were arrested by Greensboro police officers. Video footage of the incident was recorded by body cams on several police officers.  The city petitioned that the footage be made available for city council members to view.

Judge allows city council to view body camera footage, but not discuss it with others

In January 2018, a trial judge allowed members of the city council to view the body-cam footage but placed restrictions.  One of these restrictions was a gag order – that city council members could only talk amongst themselves about the footage.

The city moved the court in February 2018 to lift the gag order, which the trial judge denied.

The city appealed, arguing that the gag order violated the city council members’ First Amendment rights.  The Court of Appeals of North Carolina disagreed in its August 6, 2019, opinion in In Re Custodial Law Enf’t Recording Sought by City of Greensboro.

The appeals court noted that police body-cam footage is not a public or personnel record and that only those depicted in the video and their personal representatives have an absolute right to view the material.   The law further provides that if anyone else wants to view the material, he or she has to obtain a court order.

“The gag order does not violate the City’s First Amendment rights because the gag order only restricts the council’s speech about matters that the council, otherwise, had no right to discover except by the grace of the legislature through a judicial order,” the appeals court explained.

The appeals court analogized the situation to the U.S. Supreme Court’s decision in Seattle Times Co. v. Rhinehart (1984).  In that decision, a newspaper sought discovery of financial documents from  a party suing it for defamation.  A court granted the newspaper the documents but issued a protective order limiting the newspaper from publishing the contents.

“The present case is similar to Seattle Times,” the North Carolina appeals court wrote.  “Specifically, here, the City has no First Amendment right to the body-cam footage, but has been given the right to access the information through a court order.”

The appeals court concluded that the gag order does not violate the First Amendment, writing that “the City council members have no right to the information in the first place.”

This decision is debatable, as city council members should be able to share important information to their constituents about matters of public interest.  It will be interesting to follow this case through the appellate process.