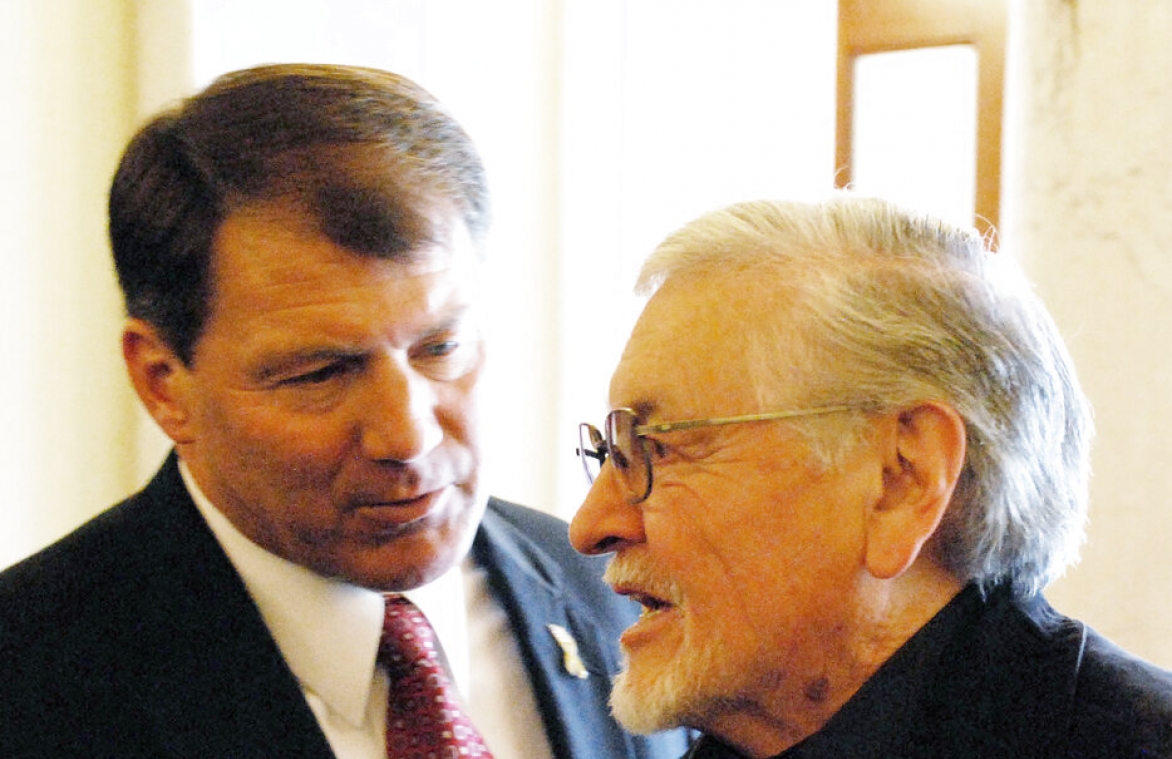 Former South Dakota Gov. Mike Rounds, left, talks with American Indian journalist Tim Giago on Feb. 19, 2010, in Pierre, S.D., after a ceremony at the state capitol to mark the start of a renewed effort to improve relations between Indians and non-Indians in South Dakota. AP Photo/Chet Brokaw

Tim Giago, the founder of the first independently owned Native American newspaper in the United States, has died at age 88, his former wife said.

Giago, who died at Monument Health in Rapid City, S.D., on Sunday, July 24, created an enduring legacy during his more than four decades of work in South Dakota journalism, his colleagues said.

Giago, who was a member of the Oglala Lakota tribe, founded The Lakota Times with his first wife, Doris, in 1981, and quickly showed that he wasn't afraid to challenge those in power and advocate for American Indians, she said.

Launching the newspaper, even years after the 1973 Wounded Knee siege between U.S. marshals and the Native American Movement, was challenging because wounds still existed on the Pine Ridge Indian Reservation and in South Dakota, Doris Giago said.

Tim Giago blamed the American Indian Movement for violence on the reservation. Windows at the newspaper were broken and the office was firebombed.

The Lakota Times was eventually renamed Indian Country Today, and later became ICT. In a July 2021 interview with the paper, Giago recounted that tense period and "some of the hard things that came out of work."

"One night (I) got in my pickup and somebody put a bullet through my windshield and just missed my head," Giago told the newspaper. "So, I mean, if that's what it took to get the freedom of the press going on the reservation, I guess that's what it took."

Giago, a 1991 Nieman Fellow at Harvard University, wrote years later that while he was working as a reporter for the Rapid City Journal, he was bothered by the fact that although he had been born and raised on the Pine Ridge Indian Reservation, he was seldom given an opportunity to do news stories about the people of the reservation.

"One editor told me that I would not be able to be objective in my reporting. I replied, 'All of your reporters are white. Are they objective when covering the white community?"'

The Giagos started The Lakota Times in a former beauty shop on the reservation, with no real training on the business side of newspapering, Doris Giago recalled.

"They gave us six months to succeed. They didn't think we would last after that. We learned from our mistakes," she said.

In 1992, he changed the paper's name to Indian Country Today to reflect its national coverage of Native American news and issues. He sold the paper to the Oneida Nation in 1998.

Two years later he founded The Lakota Journal and in 2009, he founded the Native Sun News, based in Rapid City.

"He always pushed for more, reaching for an even better way to serve Native American people with news. So after Lakota Times it was Indian Country Today. Then Lakota Journal. Then Native Sun News. He never lost his vision about how important it is for a community to have a journalistic recording of itself," said Mark Trahant, ICT's editor-at-large.

Giago founded the Native American Journalists Association and served as its first president. He was also the first Native American to be inducted into the South Dakota Newspaper Hall of Fame.

Even though Giago's work had critics, they still respected him "for doing his job and protecting Native people," ICT's editor Jourdan Bennett-Begaye said.

"Nothing could stop him. What I really admired about him was his fearlessness," she said.