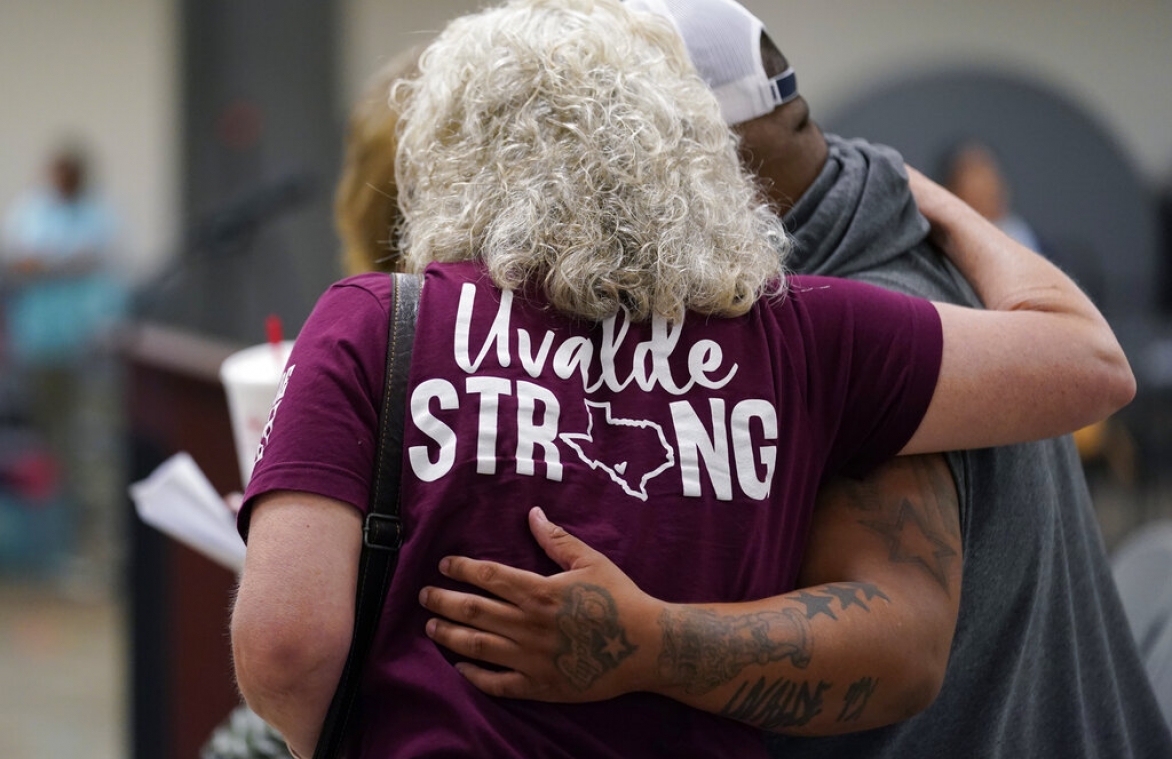 A family member of a school shooting victim, who did not wish to share her name, is greeted by a friend after a city council meeting July 12, 2022, in Uvalde, Texas. AP Photo/Eric Gay, file

NEW YORK (AP) — Two news outlets' decision to release an excruciating 77-minute video earlier this month showing police inaction during the Robb Elementary School mass shooting drew a harsh response from residents of Uvalde, Texas, even though they have sought this type of transparency for weeks.

Families of the 19 children and two teachers killed by an 18-year-old gunman on May 24 said the Austin American-Statesman and KVUE-TV displayed insensitivity by releasing the video to the public before those directly affected had a chance to see it.

The surveillance video footage published July 12 — which was then shown and written about by other news organizations — captures the gunman entering the school, and includes audio of shots fired from inside a classroom. It shows police quickly entering the school and then milling about in a hallway for more than an hour before they eventually kill the gunman.

The community's response reflects the raw feelings directed toward news reporters who came to Uvalde to probe what happened, and the reality that journalism often steps on toes.

The Texas House of Representatives committee investigating the police response to the shooting had planned to show the footage July 17 to family members and then release it to the public. The committee was still to hold a closed-door session with residents that day to discuss the conclusion of its probe.

"We get blindsided by a leak," said Angel Garza, whose 10-year-old daughter, Amerie Jo, was killed at Robb, according to CNN, which covered the appearance of some family members this week at an event in Washington. "Who do you think you are to release footage like that of our children who can't even speak for themselves, but you want to go ahead and air their final moments to the entire world? What makes you think that's OK?"

Kimberly Rubio said at the Washington event that she understood the need to hold officials accountable, but that she didn't want to hear the sound of gunfire from that day. Her daughter, Lexi, 10, was killed.

Although he didn't agree with how the investigation has been handled, Uvalde Mayor Don McLaughlin called the media release of the video unprofessional.

"There was no reason for the families to have to see that," McLaughlin said. "They needed to see the video but they didn't need to see the gunman come in or hear the gunshots."

The news outlets have said they reached out to family members before the video was released, although it was not clear how many they reached or what the response was. The American-Statesman referred a reporter to a column written by Manny Garcia, the paper's executive editor, which didn't address the subject. KVUE's news director, Christina Ginn, did not respond to calls seeking comment.

On social media, Ginn retweeted a comment from another journalist that police could have shared the video with families already themselves. Journalists had been seeking its release for weeks, given that the police response is the central focus of the investigation.

Before releasing the video, the outlets edited out the sound of screaming. The image of a boy in the hallway who spotted the gunman and quickly darted away to safety, was blurred out to protect his privacy.

During its first airing of the video, KVUE said that Tony Plohetski, a reporter who works for both the newspaper and television station, had first seen the video two weeks earlier.

They considered holding back until the video was officially released. "The problem with that is the authorities constantly, from day one, have failed the people of Uvalde," Plohetski told CNN. He declined further comment to The Associated Press.

The news outlets could have waited until the next week, but they wouldn't have been acting in the best interests of the public, said Kelly McBride, an expert on journalism ethics at the Poynter Institute for Media Studies. In this case, the video had clear and strong news value, she said.

It's often hard to make a journalistic decision for the public at large without upsetting a small group of people.

While family members are important stakeholders in the story, "we are talking about a much broader interest group, and that is the public that believes police officers will act in their best interests. You can clearly see that's not happening," she said.