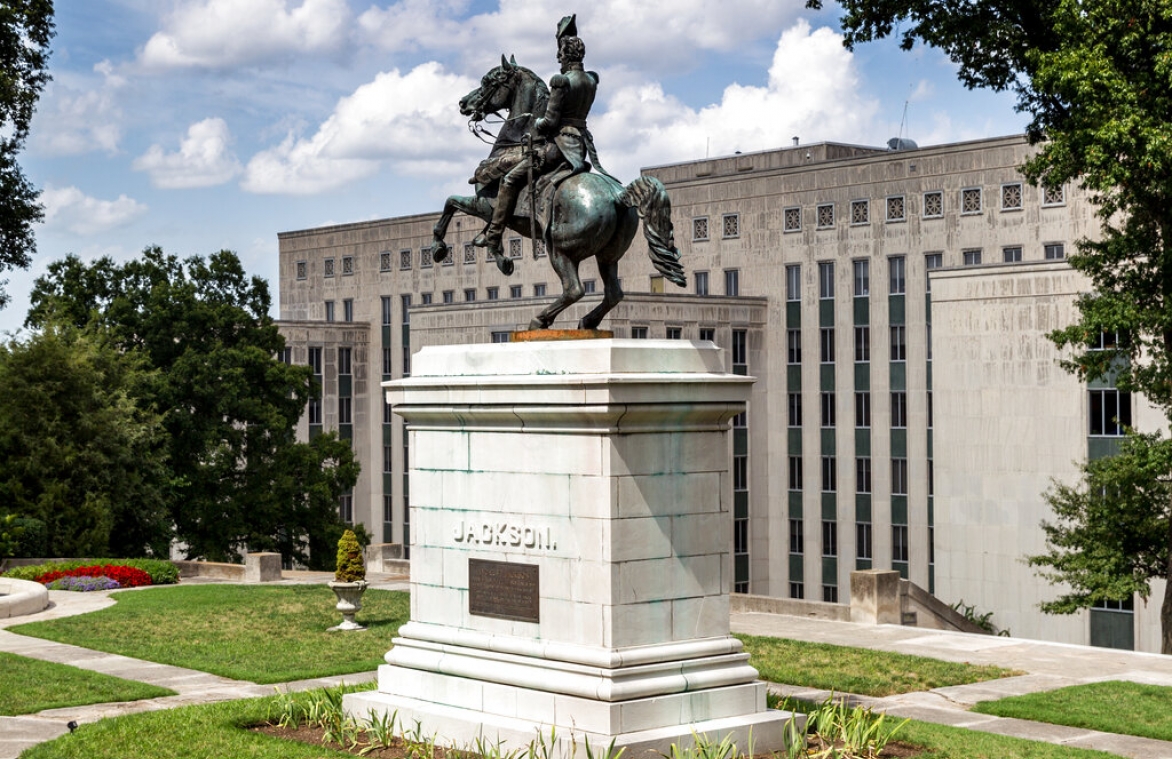 The Cordell Hull state office building is seen behind a statue of President Andrew Jackson on the grounds of the state Capitol in Nashville, Tenn., on Aug. 21, 2014. AP Photo/Erik Schelzig

As Tennesseans go to the polls to vote on Nov. 8, they will have the opportunity to vote on four changes to the state constitution, including one that results from a Supreme Court decision based on the First Amendment to the U.S. Constitution.

Two are matters of some substance. One is a right-to-work provision, which would prevent an employer from predicating employment on that individual’s decision whether or not to join a union—something that state law, albeit not the state constitution, already prohibits. This pits those who believe that compulsory union membership is sometimes necessary for union survival against those who believe that it violates the First Amendment right of freedom of association.

The other two provisions are more symbolic in nature. Neither would bring about any immediate changes in public policy. The first such provision changes the existing language of the Tennessee Constitution, which, like the 13th Amendment of the U.S. Constitution, prohibits involuntary servitude “except as punishment for a person who has been duly convicted of crime,” to say that “Nothing in this section shall prohibit an inmate from working when the inmate has been duly convicted of a crime.”

The amendment thereby indicates that even convicted felons do not become slaves. It further mirrors some efforts at the national level to clarify the provision in the 13th Amendment to make this distinction while precluding interpretations of the involuntary-servitude clause that would exempt prisoners from all work responsibilities.

The other proposed amendment would eliminate a provision in the Tennessee Constitution prohibiting “ministers of the gospel and priests of any denomination” from holding seats in the state Legislature. Similar to provisions in 13 states in the 18th and 19th centuries, the original clause was designed to enforce separation of church and state, but it effectively incorporated a religious test for public office. The Rev. John Witherspoon, the clergyman who was president of Princeton University and had signed the Declaration of Independence, wrote a satirical essay in 1789 protesting such provisions in which he suggested that perhaps states would prefer individuals who had been expelled from their clerical duties for “cursing and swearing, drunkenness or uncleanness.”

In McDaniel v. Paty (1978), the U.S. Supreme Court ruled on behalf of a Baptist minister, Paul A. McDaniel from Chattanooga, that the state prohibition of members of the clergy from public office (in this case, his right to participate in the state constitutional provision) violated the free-exercise provision of the First Amendment of the U.S. Constitution by forcing him to choose between exercising his spiritual calling and participating in a public capacity. Chief Justice Warren Burger wrote the majority opinion, in which other justices concurred, relying in part on an earlier decision in Torasco v. Watkins (1961), which had overturned a Maryland law that had required individuals to affirm the existence of God, as a violation of the U.S. Constitution provision prohibiting test oaths for public office.

In short, the provision of the Tennessee Constitution prohibiting members of the clergy from running from office has already been invalidated, and this change would simply align the language of the state constitution with current interpretations of the U.S. Constitution.

All four proposed amendments have passed both houses of the state Legislature in two consecutive sessions and will go into effect if a majority of those voting for governor approve.